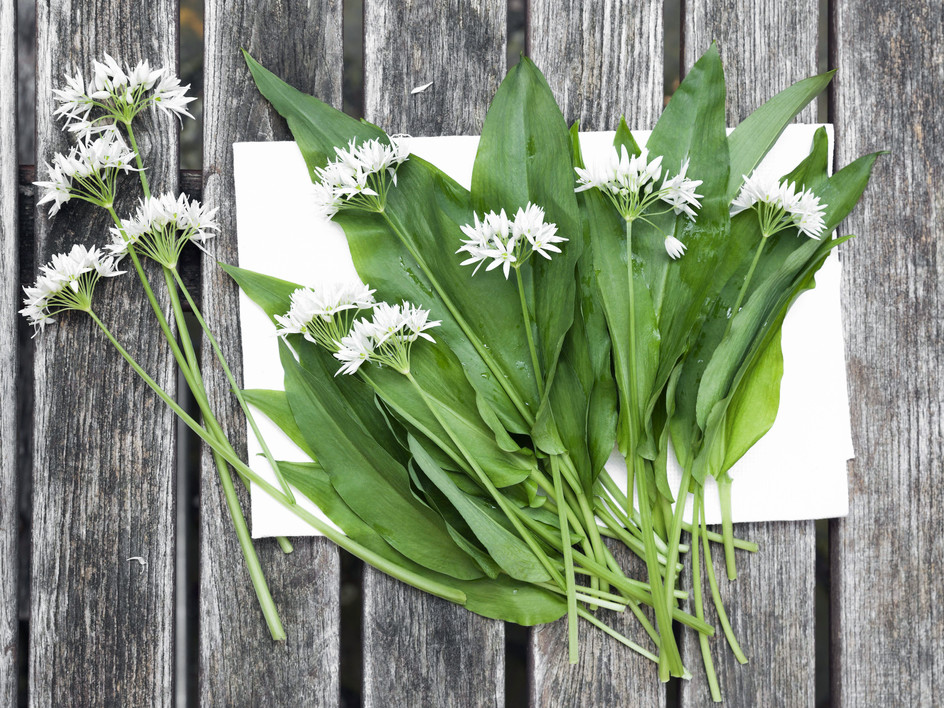 It is spring now and in Germany, the fresh produce shops are riots of colours. Leafy vegetables of every kind fill up the racks and spargel (asparagus) comes in nice creamy yellow, purple and appetising green colours. Rhubarb has also made its presence felt and berries of all kinds spill out merrily. The herbs, not to be left behind, are fresher and stouter and dill is sprouting in nice feathery bunches. Parsley, rosemary, sage and oregano are found in abundance along with one new seasonal addition and that is the mysterious bärlauch. By now, my German is strong enough to understand that launch of any kind refers to garlic and bär means a bear. This literal translation made my scratch my head in confusion and I came back home, minus the bärlauch to read about it online. The result was something very interesting and I filled my bags with fresh bärlauch on my weekly visit to the neighbourhood Friday farmer‘s market in Cologne.

Bärlauch or ramson as it is called in English is a kind of wild garlic. It is a wild relative of the delicate chives, which got its name from the fact that brown bears (and wild boars) really like to dig up the plant and eat it in the spring. Bärlauch is one of the first spring greens, which are harvested in February and March and the plant starts to bloom in April, through June. Ramsons smell strongly of garlic and their taste is pretty strong too. A curious mix of onion and garlic, bärlauch is known as ramps in the United States and maybe this is what Rapunzel‘s mother had desired from the witch‘s garden, every time she had craved for rampions.

Also Read: Pfifferling is back

Featuring wide, triangular leaves, bärlauch is a very visual and versatile herb. It is a very ancient one since evidence of humans and livestock consuming bärlauch in Denmark and Switzerland has been found dating back to nearly 9000 B.C. Bärlauch is as popular today as it used to be then and in Germany, they are used in many traditional and exotic dishes. Bärlauch cream soup and pesto are common dishes in Germany and in some places of North America, they are celebrated as a seasonal delicacy. The ramps are close relatives of the German bärlauch and are commonly found in Appalachian cuisine and Canada’s Quebec Province. In Richmond, West Virginia, a festival is held every year to celebrate the ramps.

Both the leaves and bulbs of the bärlauch are edible, and in recent years, it is used widely used in different cheeses (cream cheese as well as artisan cheeses), in sausages and cold cuts, in bread and pasta. The immensely popular Bärlauchpesto is a much added to salads, sauteed as a vegetable, or used as a seasoning to meat and fish dishes. This pungent wild garlic has such a strong fan base in Germany that several German cities also host festivals around the aromatic plant. The town of Eberbach is renowned as the wild garlic capital (Bärlauchhauptstadt) and it has secured this title as it‘s trademark. The wild garlic fair, Eberbacher Bärlauchtage, held every year in March and April, is a major month-long event for fans of this strong smelling herb.

You may also like: A camellia day in spring

Now if I have tempted you enough with whacky bärlauch, do try out this interesting recipe. This one is guaranteed to be a family pleaser.

The day before yesterday I made a small portion of this flavoured butter and ended up eating the whole thing. It is delicious, easy to make and can be frozen.

Process the butter in a food processor and mix until light. Shift the butter to a bowl and refrigerate for about 20 minutes. Towel dry the bärlauch leaves and chop them finely to fold into the butter along with the salt. Roll the mixture into a ball and wrap it up in a plastic bag. You can refrigerate it up to one week, or freeze the butter. If frozen, it stays good for up to 6 months.

P.S – This blog post is part of the weekly series called the Cologne Diaries. Every week, Maverickbird will take on a new theme, emotion and beauty of an expat life in Cologne.