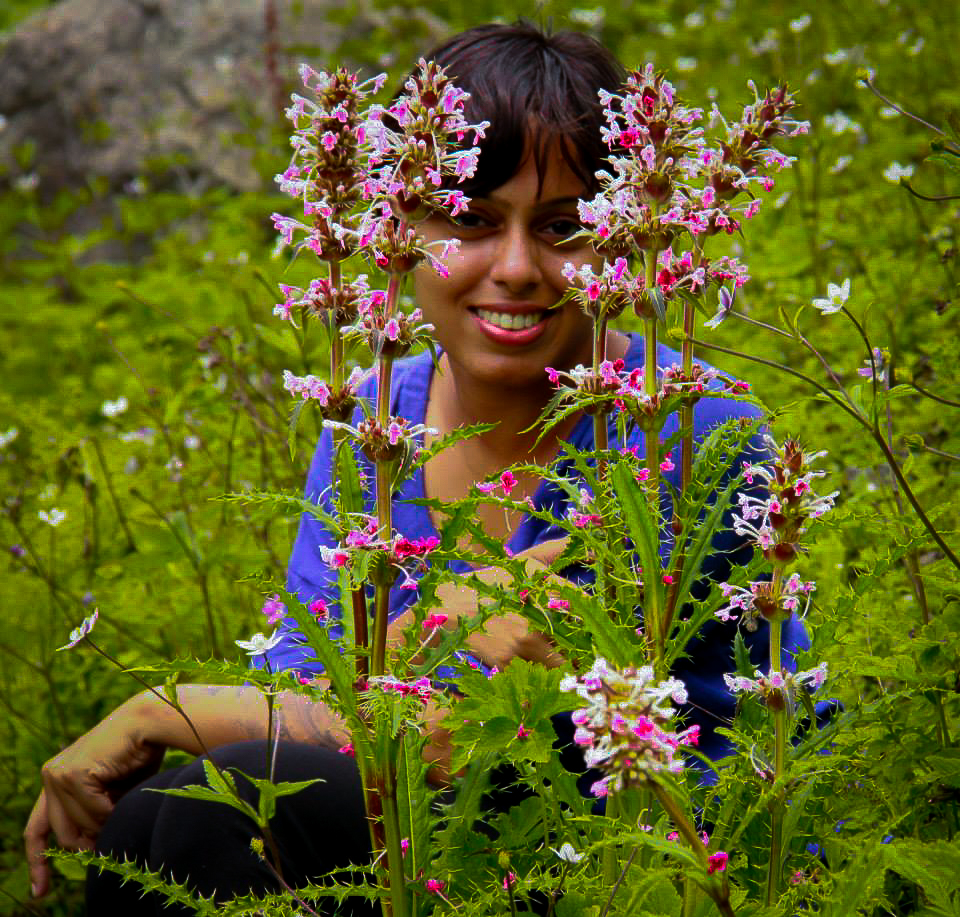 The trek to Ghangaria lasted for some time and it turned out to be quite a lung-bursting. This had nothing to do with the difficulty of the trek, which was quite moderate and it was me who was badly out of shape. The scenery continued to get lovelier as we climbed higher and cascading waterfalls, birds, quaint villages, fairy forests, and a deluge of flowers greeted us. Moss hung like soft green curtains from pine trees and pristine white waterfalls swung like bridal veils. We bought some locally grown apricots from the local women and relished their sweet juiciness while ambling uphill. The fruits turned out to be excellent thirst quenchers and we replenished our energy at makeshift snack shops. These were ramshackle structures et up by the locals to cater to the trekkers and pilgrims and they sold delicious lemonade, tea, and piping hot Maggi instant noodles.

The trekking trail for the Valley of Flowers and beyond

The Hemkund Sahib pilgrims of Ghangaria

Funnily, the trail got crowded as it went uphill and narrower and a steady stream of Sikh pilgrims passed us from both sides. They were headed towards the holy Hemkund Sahib Gurudwara, which stood at a higher altitude and that was our next destination after visiting the Valley of Flowers. The pilgrims were mostly a happy bunch on various modes of transportation. The elderly people rode up on ponies, while the younger ones walked in talkative groups. Chanting, laughing, and chatting, they were very pleasant co-trekkers who came from different parts of India, as well as far as the UK and the USA. Bare feet and hauling their massive luggage, it was incredible how energetically they scampered up and down from Ghangaria and the two of us followed them at a leisurely pace.

A beautiful viewpoint on the way to Ghangaria

Leaving the missing village of Bhuyandar

Being not at the best level of fitness, we found the trek to Ghangaria to be a real grind. Stretching for more than 14 kilometers it went pretty high too, though under no condition, was it a difficult trek. Despite getting bone aching, we walked steadfastly refusing the services of porters and ponies and reached the roaring Laxman Ganga river without a pause. The bridge across the river was completely broken and temporary ones swung and creaked dangerously. Slowly complete wilderness inched closer to us and Bhuyandar was officially the last village before huge tracts of dense uninhabited forests began on the other side of the river. Bhuyandar, however, was completely destroyed by the 2013 flood and nothing remained of the once-bustling large village. Stones and gravel smothered the banks completely and only a few twisted metal bars gave away the site of an erstwhile human habitat.

The last human habitat of Bhuyandar stayed behind

Break by the Laxman Ganga river before continuing to Ghangaria

The sight shook us more than exhaustion and the prevailing surrounding silence numbed us into complete tranquillity. We decided to take our first break by the silver Laxman Ganga river and sat silently taking in the stunning natural beauty. Misty mountains surrounded us in a tight embrace and dense jungles covered them. The bright blue sky was moody and the mountains looked unpredictable. Rain and sun played tricks and shadows dappled the scenery. A cold, fragrant air pervaded and it stayed like that until we reached Ghangaria. During the entire trail, occasional rain showers caught us by surprise, and by the time, we put on our raincoats, the sun bore down our necks fiercely. We had shopped for a couple of thin plastic raincoats from Govindghat and they were nothing but flimsy sheets fashioned into hoods with arm holes. While they were not very durable, they were thin enough to keep us cool during the sunny part of the trek.

Complete wilderness began immediately after crossing the Laxman Ganga river and there was only one snack shop open for business. The trail at this point disappeared into the forest and we trekked through heavy masses of wild roses, jasmines, anemones, forget-me-nots, and dog flowers. Beehives hung like baskets from mountains older than time, moss grew fat on stagnant stones, and thick clusters of trees hid the sky at places. We trudged, took breaks on stone benches, and continued an uphill walk for what seemed like an eternity. Forget-me-nots twinkled like stars, jasmines scented the air headily, and we quenched our thirst from icy cold glacial streams. Ghangaria was still nowhere in sight and the day was slowly drawing to an end. Due to our leisurely pace, we spent the entire afternoon on the trail and dusk was knocking at the door.

Where glaciers broke off into streams

Suddenly after what seemed like forever, the wilderness cleared, snow-covered mountains rose sharply close to us, and flower-filled meadows rolled on both sides of the trail. It was the helipad field of Ghangaria and the luxurious Sarovar Portico camps clustered at one end of the meadow. Ghangaria was only a few kilometers away and the clear sight made us whoop in joy. It was also early evening and we were just in time for the sun to set for the day. The clear open sky still bore a shade of faded blue and the snowy peaks basked in the beautiful gold of the evening. Glaciers broke apart with loud retorting noise and streams gushed out from them. The air was heavily scented and flowers dotted the meadows in pink, yellow, blue, and red. Further ahead fern, fir, and rhododendron forests bordered darkly and the slender Pushpawati river flowed quietly next to them.

The wild roses seemed to grow out of the rocks

Ghangaria arrived amidst fluttering gilt-coloured streamers, heaps of horse dung, and horribly overpriced bad hotels. We had been foolish enough, not to pre-book a room at the government-run GVNM tourist bungalow and so had the seriously bad option of a Krishna Palace hotel instead. Terribly shabby with bare minimum amenities, it was a super rip-off that charged tired travellers for hot showers as well. Its only free facility was heavy blankets and the nights at Ghangaria did get freezing cold. Unfortunately, our misadventures during the Valley of Flowers trek had just started and they began with a bang with the horrible Ghangaria village. A super tourist trap, Ghangaria operated only during the tourist season and the villagers lived there on a temporary basis.  Exorbitantly priced pay phone booths were the highlights of the village and apart from maybe ten hotels and a gurudwara, it had nothing. Mostly used by travellers to the Valley of Flowers and Hemkund Sahib, Ghangaria remains inaccessible in winter due to heavy snow.

Disappointment waited for us at Ghangaria

The anti-climax called Ghangaria and much ado about nothing

It goes without saying that Ghangaria left an unpleasant aftertaste to a magnificent trek. The weather as if on cue took a turn for the worse and the night became horribly wet and cold. We ordered in-room tea and dinner and huddled under multiple blankets to stay warm. An old chatty masseuse knocked at our door to offer a foot massage and while kneading our aching calves, broke the most terrible news, we had heard in a long time. The Valley of Flowers owing to the 2013 floods was closed that year and no amount of bribes, cajoling, or string pulling at Ghangaria would let us in. Landslide, broken bridges, and washed-off portions of the trail made the national park unsafe for tourists, and the valley was indefinitely closed until further notice. It was a perfect scenario of “Much ado about nothing” or, was it?

Our trek to the Valley of Flowers continued

And we started moving higher

Into the mountainous wilderness.

The Laxman Ganga river caught us by surprise,

And so did the beautiful birds.

As we went higher,

There were flowers and

We saw many common and