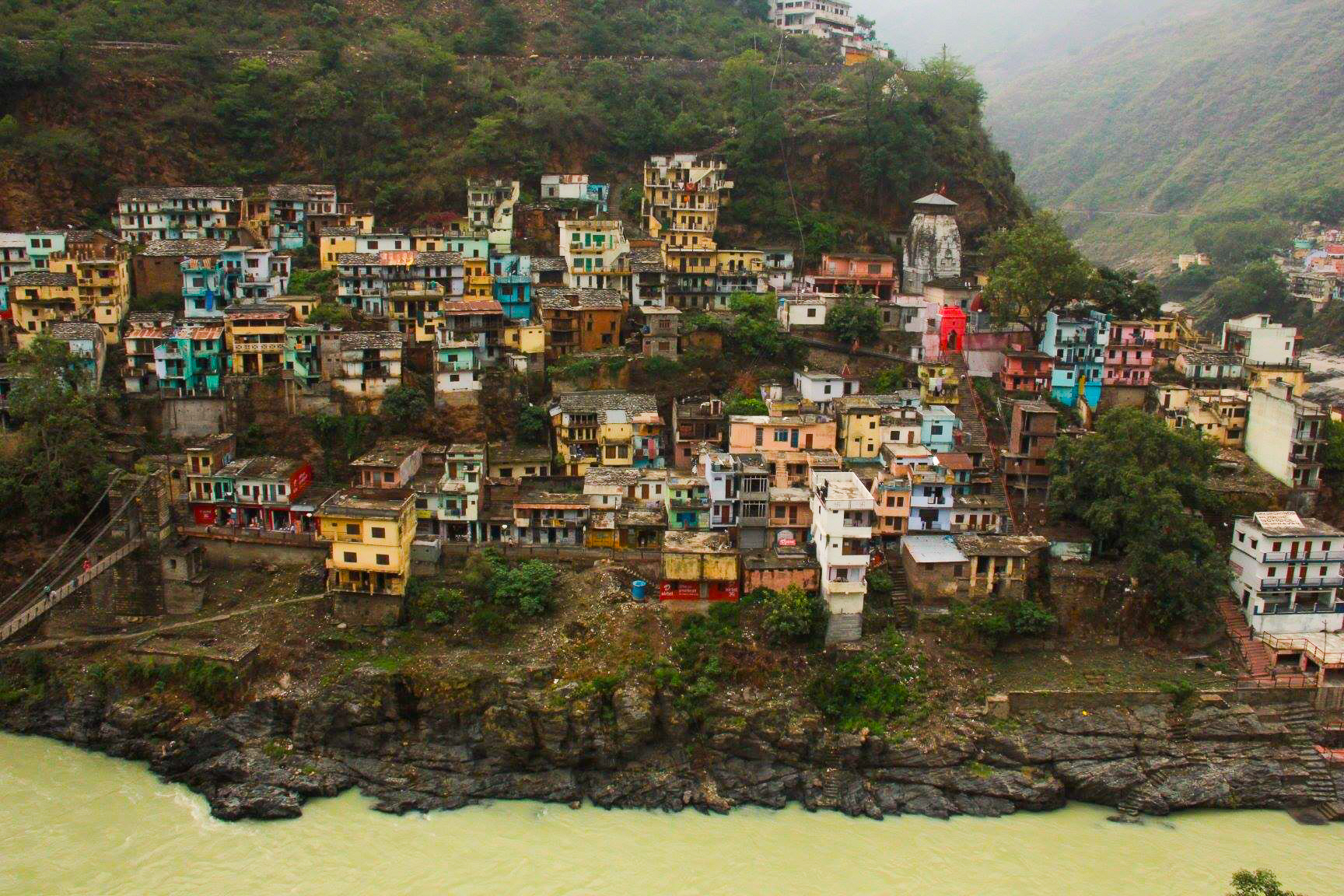 A drive past the beautiful Uttarakhand prayags

The next morning we started before time from Rishikesh. Our final destination of the Valley of Flowers National Park was still very far, yet we were eager to start inching toward it. The sun was yet to rise when my friend and I checked out of our hotel and dew dripped from the forests. The Ganges flowed quietly and the winding lanes of Rishikesh were silent. The ever-busy Laxmanjhula looked deserted and only a group of monkeys sat there, enjoying the morning breeze. We hired an auto rickshaw and went to the bus stop, which even in that wee hour of the morning was crowded. We were planning to get on a local shared taxi for Joshimath past the beautiful Uttarakhand prayags and due to the heavy flow of pilgrims headed for the Chardham Yatra (4 holy shrines pilgrimage), did not have to wait long.

The journey of the four dhams and Uttarakhand prayags

Chardham comprises Yamunotri, Gangotri, Kedarnath, and Badrinath and all of them are located in Uttarakhand which is also known as Devbhoomi (The Land of the Gods). Incidentally, Uttarakhand prayags, actually the confluence of five rivers are also of high religious importance and both the pilgrimages bring huge numbers of pilgrims to this state. It took us a bit of a time to get the biometric registrations done which after the uncountable loss of lives in the 2013 flood became mandatory for all pilgrims and travellers. After that little hassle, our journey started smoothly and we boarded the shared taxi to Joshimath with lots of eagerness.

A view at one of the Uttarakhand prayags

The drive became immediately uphill and we went along the Ganges as she curved and curled along the gorges and ravines. The road was in terrible condition and we bumped around endlessly, but it was such a beautiful Himalayan morning, that nothing mattered. Small clouds sat atop shapely breast-like hills and mist-wreathed around their tops like garlands. Rishikesh was lush, peaceful, and deeply forested and for some reason, the Ganges smelled mildly fragrant. A beautiful hilly town, Rishikesh is not only famous for spiritual retreats but also offers excellent hikes, white water rafting, and bungee jumps.

I prefer the pretty Shivpuri more than the Uttarakhand prayags

Shivpuri lay at a higher altitude and was lovelier with its cozy secluded resorts and river camps. Due to the monsoon, the popular soft sandy beaches were deserted and the rafts lay rolled up in wooden sheds. Small Himalayan villages clambered up the slopes and the rustic eateries slowly stirred into wakefulness. Goats scampered, monkeys chattered, and women went about their chores busily. They were petite pretty women and always kept their hair covered in colourful, signature bandannas. The Himalayas that morning were dotted with them; as they trudged in rows carrying bamboo baskets filled with huge amounts of grass on their backs or were painstakingly bent over rice fields planting saplings. Waterfalls gushed down the mountains spraying the bus mistily and tumbled underneath bridges where men sat huddled to watch the world go by.

It took more than half a day to reach Joshimath from Rishikesh.

Exhilaration and stunning beauty of a Himalayan drive

I loved the energy of the mountain mornings and the way a flurry of activities began early. Nature in contrast to the industrious humans moved languidly at a hushed pace. Blood red pomegranate flowers dropped dew over emerald patches of rice fields and orchards filled with tiny yellow mangoes passed by in profusion. Clouds smoked from fragrant pine forests and rivers peeped through deep ravines and gorges. We were very high and were travelling on a shared taxi on a Himalayan road that did not have any rail guards. Although beautifully exhilarating, the sheer height of the drop and landslide-prone areas made us very nervous and we both stared at eye level instead.

The famous Uttarakhand prayags or river confluences arrived soon, one after another, and the rivers twisted, mingled, and merged in a most mind-boggling manner. Devprayag was the first confluence to arrive and located around 71 kilometers away from Rishikesh, it was the prettiest one I had ever seen. Light green Bhagirathi met the muddy brown Alaknanda river there and these two merged together to form the holy Ganges. An important religious town centered around this prayag and the distinct mingling of 2 different coloured streams was simply breathtaking. We stopped there for some time to stretch our legs, sample the tiny sugar-sweet mangoes and watch the candy-coloured houses cling to the banks like painted barnacles. It reminded me of Amalfi Coast and bizarrely looked like a mini version of it.

The beauty of the prayags is astonishing.

One of the important Uttarakhand prayags, Rudraprayag, and its religious town

Rudraprayag came soon after and we stopped for lunch at the busy commercial town. One of Panch Prayags or 5 Confluences, Rudraprayag represented the confluence of Alaknanda and Mandakini rivers. The two joined together to become one as Alkananda there and the popular town of Rudraprayag grew around it. Prayags are important religious sites for Hindus and draw many pilgrims who visit there to worship the confluences, bathe in them and perform the last rites of their departed ancestors. We lunched at a restaurant beside the Rudraprayag and I loved the way mist rolled over the river. Pine-covered slopes covered both sides and a suspension bridge stood steady over the choppy water. Remnants of the 2013 flood still dotted the banks and here and there twisted pieces of metal lay scattered like grim reminders. The path to the two sacred dhams/shrines of Kedarnath and Badrinath diverted at Rudraprayag and this made the roads busier, noisier, and more traffic-choked. It also formed the jumping off the base of many beautiful treks especially the Chopta- Tunganath-Chandrashila trail.

Rishikesh was already 140 kilometers away and we were already on the road for more than 8 hours. Road weariness was creeping in heavily but we still had more than 100 kilometers to cover. Dark clouds descended gloomily at Rudraprayag and rain splattered fiercely against the window panes. We slept off immediately upon resuming our journey and woke up near the famous Garuda Ganga temple. The sun shone brightly on our faces, soothed our sleepy eyes and no traces of rain were visible in the cloudless blue sky. Big butterflies flitted about in the sun and a river still hemmed along the route. We were in Uttarakhand’s pretty Chamoli district, and Joshimath was tantalizingly close. Urban India was more than a few days away and in the midst of beautiful Himalayas, freedom felt awfully sweet. Garuda Ganga river tumbled down joyfully and a fresh breeze filled the picturesque little village. Wild daisies carpeted the slopes and we watched believers collect pebbles from the river. Dedicated to Lord Vishnu, his consort Goddess Laxmi and their ride Garuda, the bird, the temples were much revered and the pebbles supposedly warded off poisonous snakes and scorpions.

Joshimath was just another Himalayan town

It was late noon and we were bone tired to feel any religious stirrings but the golden sunlight lifted our exhausted spirits. The journey resumed with jagged snow-capped peaks coming into sight and we stared in wonder at the beauty of the Himalayas. The mountains were rockier, craggier, and higher, and snowy peaks were visible on the close horizon. Vegetation strangely was less lush, although sunlight revealed meadows nestled between steep cliffs. Joshimath arrived in a matter of hours and immediately the familiar sights of a hill town filled the space.

Flowers, smoke, and traffic of Joshimath.

A restful night before the arduous trek

Traffic snaked along the narrow winding roads, hotels climbed up and down the slopes,
and flowers burst out from everywhere. We disembarked, happy that the tiring drive had finally come to an end, checked into the lovely Hotel Snow Crest, and enjoyed a gorgeous Himalayan sunset from our room. The last rays of the setting sun lit up the snowy peaks in brilliant gold and a soft blue twilight fell silently. Wild roses curled outside our window and noises of crickets filled the evening. It felt like heaven and made the nearly thirteen hours ride absolutely worth it.

Along the misty Himalayas,

Is a treat for sore eyes.

Our day in the mountains

We watched the Himalayan rural life

Came one after the other,

As we moved deeper into the mountains.

As nameless villages and hamlets,

After a very long drive and lots of rain,

Our destination of Joshimath

And we fell asleep dreaming of a