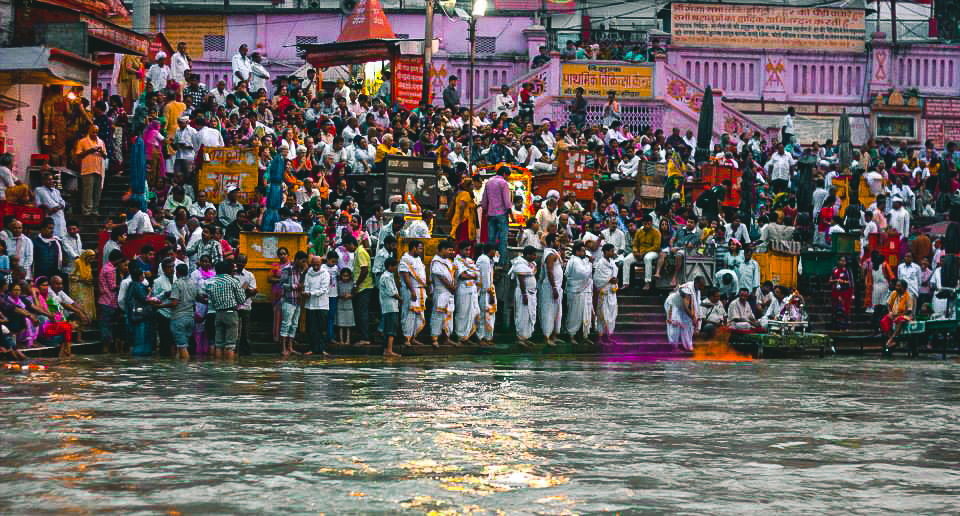 Escaping the kavariya mania in Haridwar

As wonderful as the feeling was of my travel dream to the Valley of Flowers coming true, my experience at the jumping-off base of Haridwar was nearly traumatic. The reason was an uncontrolled gathering of wild testosterone at one place and by this I mean, the crazy harassing antic of the kavariyas (Hindu religious pilgrims). It was July and the mainland of India was getting drenched by the annual monsoon. Southeast Asia was flooding too and having just returned from there, I was happy to escape from the relentless Indian monsoon of the plains. Valley of Flowers being tucked away in the Himalayas promised some respite and I eagerly travelled to the starting offbase of Haridwar to begin the trek. The route which began at Haridwar, went past Rishikesh, to Joshimath, from where the arduous trek to Ghangariya village began. The Valley of Flowers can be accessed from the Ghangariya village and most people spend a night or two there. My friend and I had plans to go higher up to the beautiful Sikh pilgrimage site of Hemkund Sahib and since it was at a higher altitude, guaranteed spotting of many more rare blooms.

The long journey to Haridwar begins

The route was long and tedious and rain in the mountains is sometimes pretty dangerous. Uttarakhand was still reeling from the devastating 2013 monsoon floods and we were told that remnants of the tragedy were still rampantly strewn throughout the region. The Valley of Flowers, however, bloomed riotously only during the monsoon months and the flowering peaked in July-August. All these exciting details ran through my head during the long overnight train ride from Calcutta to Delhi, from where a harrowing bus 7 hours ride finally delivered me to my destination in Haridwar.

Calcutta to Haridwar was via Delhi

Arrived at a sea of religious orange zealots in Haridwar

Haridwar appeared and I got off the bus into what seemed to be a sea of orange-clad, body-grabbing, lecherous men. Being monsoon or Sawan (as called in Hindi), a huge number of traditional orange-clad kavariyas infested the place like flies and I found myself stranded amongst them without a single mode of public transportation in sight. Worshipers of the Hindu god Shiva, kavariyas make the monsoon pilgrimage to Haridwar on foot from various parts of India and they always travel in groups. Walking really long distances with pots of Ganges water is a very sacred pilgrimage, which unfortunately over the years lost its religious sanctified spirit. In recent years, the pilgrimage evolved into more of a massive public party for India’s teeming barely educated, unaware, and easily swayed masses, most of whom are also very sexually repressed.

The holy city of Haridwar turned into a hell-hole

Owing to this religious mega public party, the holy city of Haridwar was a hell hole when I arrived at it and huge numbers of people camped, squatted, bathed, slept, cooked, danced, and defecated by the roads. It was obnoxiously filthy, crowded, and noisy as music blasted from massive loudspeakers hoisted at the back of small trucks. Policemen looked harassed, auto-rickshaws were non-existent, and I constantly got visually stripped, pawed, and pushed. Finally, a kind policeman took pity on me and dropped me at Rishikesh on his bike. I was so relieved to get out from there that I immediately changed my mind and took up a hotel room in peaceful Rishikesh.

I escaped to Rishikesh for some peace.

Rishikesh too got run over by the orange mania

The usually relaxing placid town of Rishikesh was also suffering from the kavariya mania and it was overrun by the annoying orange boys. Thus, I stayed holed up in my hotel room at Tapovan and spent a couple of days watching the mist settle low over the beautiful Ganges. Unlike Haridwar, where dusks demand religious rituals, twilight falls softly at Rishikesh and the river banks reverberate with the sweet sound of tolling temple bells. My friend was yet to arrive and I waited at Tapovan, in preparation for the trek. Finally, the night before the journey to Joshimath came and after the arrival of my friend, we retired to bed early to start fresh in the morning.

A holy town in India.

Our official 1st day of the Valley of Flowers trek demanded an early morning start and it was going to be a long day. Leaving Haridwar and Rishikesh behind at the foothills, we were to go up and down various mountains, pass numerous river confluences, obscure Himalayan villages, and beautiful hilly towns for nearly 6 hours before reaching Joshimath. Sleep was difficult, owing to the excitement and I tossed and turned on my bed praying for the morning to arrive. Rishikesh was wonderful, but the Valley of Flowers was my destination and that’s where I wanted to be.

I looked forward to the spiritual beauty of the Himalayas.

The long journey to Haridwar was full of sights and anticipation.

The holy city of Haridwar arrived with a deluge of kavariya pilgrims.

It was overrun by an orange mania of overexcited pilgrims.

I managed to escape and

Soulful exclusivity by the Ganges

Where I counted days

For the Valley of Flowers trek to begin.