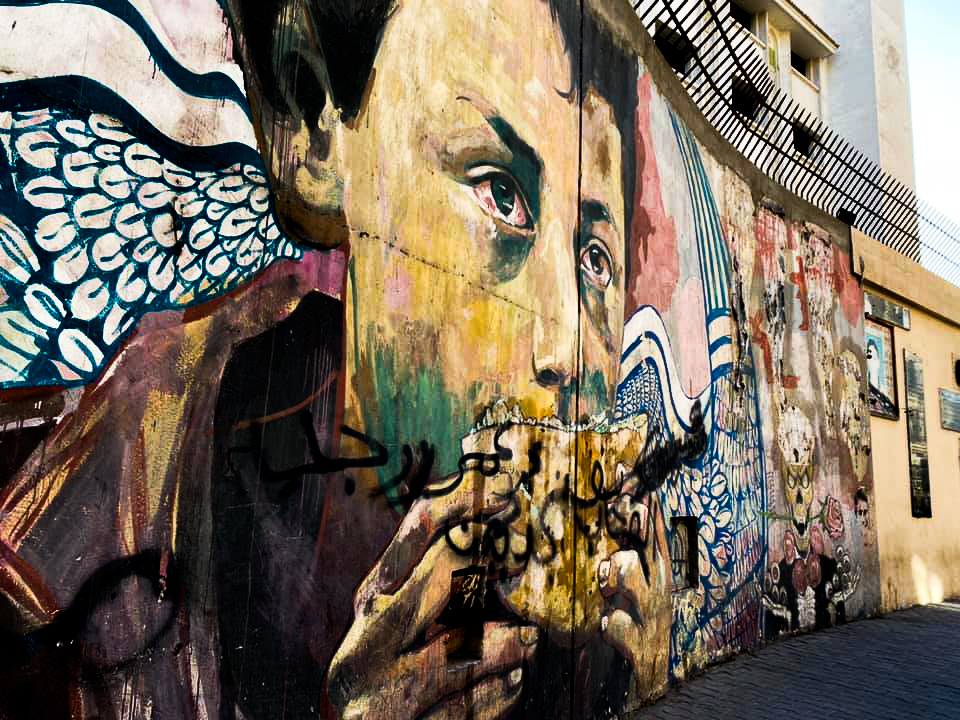 Cairo street art, one that influenced a revolution

Recently someone commented on a social media site, that street art reflects the mentality of the people of a place. It cannot get truer than that. While I was living in Egypt, I was especially amazed by the lack of Cairo street art especially since the city has a major youth culture. I found out much later why and the fact made me consider street art to be much more than what it seems. It is true that street art just like other forms of art is a medium of expression. However, it is free, easily available for all, and there is complete freedom in how you use that medium. I guess this makes street art a very powerful tool for the common people and this is the story of Cairo street art, the ones that triggered a revolution.

A powerful Cairo street art in Nasr City in Cairo

In 2010, a young man in Tunisia set himself on fire. He was protesting against police corruption and unemployment. These were two social evils that ran rampant in the entire Afro-Arabian region and soon mass protests spread across to neighbouring Egypt. Thousands of people started gathering in Cairo’s Tahrir Square and they demanded the resignation of President Hosni Mubarak step. People from all walks of life, professions, and ages soon started arriving in Cairo to join the demonstrations and the crowd swelled to unimaginable numbers. These were not waves of people, but an entire tsunami of angry dissenters who demanded a change and of course, like all dissenters were ordered to be crushed. They were met with horrible police brutality and hundreds were killed or never heard from again. It was at this time when pure brute force was crushing the spirits of the demonstrators that Cairo walls especially around Tahrir Square got sprayed with inspiring street art. This Cairo street art depicted the police brutality, and the oppression faced by the common folk, and kept the revolutionary spirit alive. Wailing mothers of martyrs of the revolution were shown along with powerful reminders as to why the revolution must not die away. During the riots, arrests, and torture, these artists just kept on painting as if the will of the people depended on their powerful Cairo street art.

Joker as a puppeteer, Cairo.

‘Don’t forget why I died’

The most famous portrait from this time is perhaps of the street urchin eating a vegetable sandwich, one of the cheapest eats to be found in Egypt. He was killed during the revolution and his sad portrait became a burning torch for the people. The revolution lasted until mid-October and during that time, several thousand people were arrested as the government cracked down on protests with reports of torture, surveillance, and restriction of social media platforms. However, the people influenced by these inspiring images and having their backs pushed against the wall did not stop until President Hosny resigned and the Egyptian revolution became successful. Today, nearly a decade has passed since those trying times and the faces of the martyrs still haunt some downtown city walls. The message still blazes, ‘Don’t forget why I died’. It is an important message because the easy-going Egyptians are a forgetful bunch.

A mural for a mother of one of the revolution’s martyrs holding the picture of her son. Photo Credit – Culture Trip

Erasing the Cairo street art or erasing a past

Recently, I read reports of a major beautification project in the downtown area. Based on my experience, I believe it would lead to the demolition of the Arab Spring graffiti. It is sad because these are not just random Cairo street art but reminders of a huge cultural, social, and political movement in Egypt. These are memories of how powerful the unity of the people can be and what art can do to make changes happen. I often wonder if this is why the city walls need to be cleaned, to be erased off their powerful Cairo street art, their revolutionary past.

A figure of one of the Egyptian Revolution‘s martyrs’, drawn on the walls of Mohamed Mahmoud street, holding a piece of paper with his name and his death date written on it with “Don’t forget why i died” written under the figure. Photo Credit – Culture Trip

These walls tell the story of the Egyptian revolution, the story of non-violence creativity being opposed with brutality and repression.

An image showing one of Naguib Mahfouz’s “Palace Walk” characters, Amina, who represents the submission to the patriarchy. The figure of Amina is surrounded by women who represent the complete opposite Umm Kulthum, and Nefertiti.

A mural by Ammar Abo Bakr, painted at Mohamed Mahmoud Street, shows a tearful boy holding a piece of bread. The boy was one of the child martyrs.

This painting shows a man with a clown mask holding ancient Egyptian scepters of kinship.

NOTE – “Writings on the Walls” is an ongoing series in which I hope to collate awesome street art from around the world. If you wish to collaborate, please email me at svetlanabaghawan@yahoo.com and we can take it from there. To know more about Cairo street art, check out Suzee in the city.