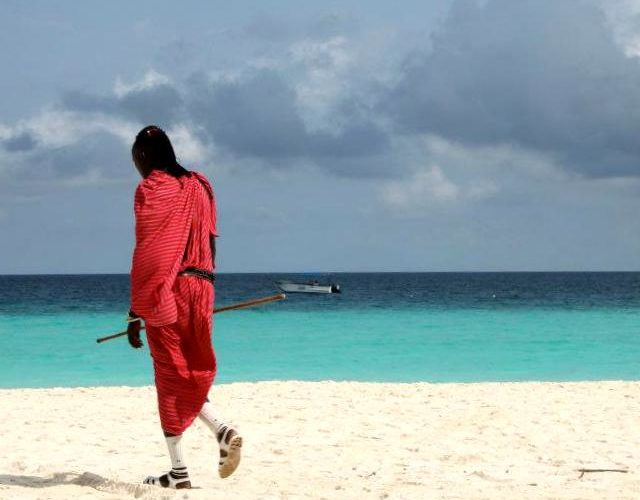 My group headed for the shore soon after the Prison Island visit and after a quick lunch were on our way to Nungwi beach. Located at the northern tip of Zanzibar, Nungwi is a charming fishing village and it had some breathtaking beaches. Sugar white with lovely coral outcrops, the ocean was warm, clear, and gentle there and the village itself was an intrepid one.

Though small with only one daily fish market, a couple of grocery stores, a small mosque/school/clinic and beach restaurants, Nungwi was quite popular and its cheap souvenir stores and a rustic discotheque hummed with tourists. Henna painters, massage shops, and dive bars lined the village and swaying emerald palms shaded cozy beach huts. The beach itself was like a dream and it had the softest sand of dazzling white colour. After the culturally immersive experience of Stone Town,  Nungwi beach seemed like a perfect place to relax, let our hair down, and rejuvenate before continuing with the rest of our overlanding trip.

That is exactly how I spent my days at Zanzibar’s wonderful Nungwi Beach. Swimming, snorkeling, reading book, napping, and long lazy meals constituted of my daily schedule. This eat, sleep, and repeat routine was broken only with beach volleyballs matches and twilight candlelight dinners by the sea. All these were a far cry from the exotic Stone Town and the Indian Ocean never ceased to be gorgeous. Nungwi Beach was a much needed R&R paradise and after the end of my stay, I unwillingly left its sandy shores.

Zanzibar, I will be back

The gorgeous Indian Ocean was unusually calm on the ferry ride way back to the mainland and at Dar-es-Salaam, my overlanding group got reunited with our faithful truck. My epic overlanding adventure resumed as per itinerary and it took me to many beautiful places in different countries in Africa. Zanzibar, especially Nungwi Beach continued to haunt me with its unique charm and I realized being bewitched with its clear blue water, and red sunsets for life.

You may also like: Slaves, spices, and Stone Town of Zanzibar

A traditional dhow at Zanzibar

Nungwi Beach was voted as one of the loveliest beaches in the world of 2018 by CNN. Located in northern Zanzibar, Nungwi is blessed with practically no low tide. So throughout the day, you can just jump into the ocean and swim away. Boats also launch straight from the beach and it is a very popular place among backpackers as well as well-heeled star resort travelers. Because of its popularity, Nungwi Beach has a wide variety of cafes, restaurants, activities, and accommodations available. You may call it a party beach and the 10 minutes away Ras Nungwi will be a better alternative if you are looking for seclusion.

When to Visit and How to Reach Nungwi Beach

Because of its equatorial climate, Nungwi is a year-round destination. Nungwi is 58 kilometers away from Stone Town and one-way taxi drop costs around 60 USD. To reach Nungwi Beach by public transport, take the local shared van (dalla dalla) nr. 116 from dalla dalla station in Darajani. Since the dalla dalla stops in Nungwi village and from there you have to walk for 10-15 minutes to reach the main Nungwi side. Head to the opposite direction and walk for about 30 minutes for Ras Nungwi and Sazani beaches. Please note that you need to be quite adventurous to get on a dalla dalla. Though very popularly used by the locals, dalla dalla developed as an illegal taxi system in Tanzania. Many are driven quite dangerously and on my last dalla dalla ride, I shared my bench with a man who boarded with 3 chicken and 1 baby goat, which sat on my lap the entire way.

Where to Stay and Eat

Nungwi has a wide variety of accommodations available. I stayed at the lovely Nungwi House and a friend of mine practically bargained himself into a local household as a paying guest. There are also Flame Tree Cottages, Jambo Brothers, DoubleTree by Hilton, Mnarani Beach Cottages, and many more. Nungwi Beach is famous for its local seafood and there are plenty of places to choose from. Langi Langi is supposed to be the most famous and Mangi’s Bar is very popular.

Things to Do at Nungwi

Apart from walking around the beach, there are plenty of things to do in Nungwi. Visit the local fish market at 6 am to watch the locals bid for the best catch. There is a boat shed next to the fish market where you can watch local dhow making. You can take a boat ride to Mnemba Atoll for some excellent snorkeling and there are daily sunset cruises which have live local music. The nearby Mnarani turtle aquarium and injured turtle rehabilitation center is pretty interesting too (5 USD entrance fee). Walk around the Nungwi Beach, play volleyball or beach ball with the locals in front of the Nungwi Inn Hotel.