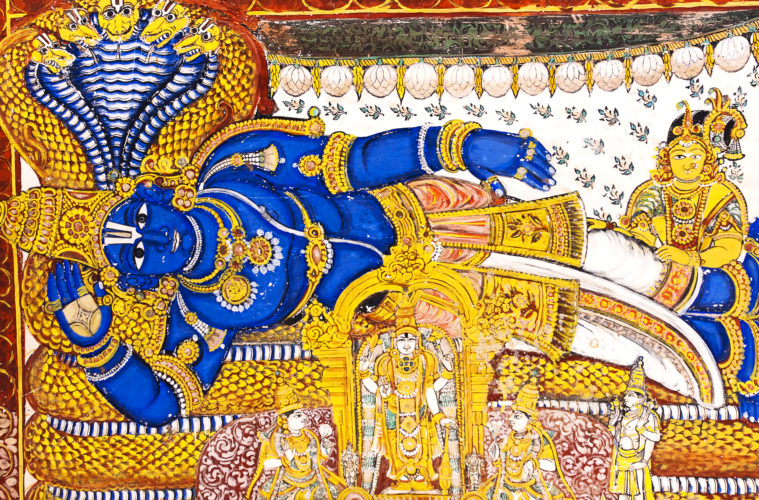 I woke up to the aroma of filter coffee wonderfully brewing in the kitchen. A proper south Indian breakfast was being prepared by my homestay owner and the food processor noisily whirred coconut chutney. The morning hurry-scurry made me smile and I quickly joined the pace. Today, I plan to visit the grand Srirangam Temple and had fallen asleep reading about it last night. The Sri Ranganathan temple of Srirangam is the epitome of the Dravidian culture of India and it is not just a magnificent heritage site. Many stories, myths, and mysteries surround this temple and I am intrigued.

The idol which refused to go to Sri Lanka

Located on an islet formed by the Cauvery and Coleroon rivers, the Srirangam Temple is India’s largest temple. Considered to be a “kovil” (temple of utmost importance) by Vaishnavs, marvelous legends surround the existence of its main idol, which is lovingly called Azhagiya Manavaalan or the beautiful groom in Tamil by its devotees. It is believed that the Ranganathan Temple’s “Ranga Vimana” idol was received by Brahma, the creator of the universe in a deep trance-like state. At one time, it was under the possession of Lord Rama, who presented the idol to his Sri Lankan ally King Vibhishana. When Vibhishana was passing through Srirangam to return to his native country, the idol wanted to stay back and was established there on the condition that he would always cast his benevolent glance towards Sri Lanka. Till today the reclining idol of Sri Ranganathan of Srirangam temple faces south.

You may also like: The beautiful stone temple of Karnataka

The story of the Muslim princess in love with the deity

The importance of the idol is not restricted to Vaishnavs and it is believed that Malik Kafur, a Muslim invader from Delhi once took it with him to the capital. The temple devotees in a daring act of recovery traveled to Delhi, where they charmed the emperor with their histrionics. The pleased emperor returned the idol to them and it went back to Srirangam with an extra ardent follower in tow. The new admirer was Princess Surathani, the apple of the eye of the Sultan. The princess had fallen in love with the deity and accompanied it all the way to Srirangam where she attained moksha in front of the idol. This quite understandably led the grieving father to attack the Srirangam Temple and nearly 13,000 Vaishnavs sacrificed their lives to protect it from harm. Fierce battle and plundering of Srirangam ensued until the Devdasis seduced the army chief to stop the bloodshed. The idols of Sri Ranganathan and his consort Sri Ranganayaki, however, were cleverly removed by the priests before the invaders reached Srirangam and they traveled all across south India before getting re-instated after nearly 60 years.

Is this the South Indian Meera of Lord Ranganathan?

Then there is the story of a young girl who was blindly in love with Lord Ranganathan. The girl, Kodhai was found under a tulsi plant by a temple priest and was lovingly raised by him. She lived in the priest’s household, helping with little chores and one of her daily activities was to prepare garlands for the Srirangam Temple deity. She had a peculiar habit, though, which stemmed from her desire to make everything perfect for her lord. Kodhai would wear the garland once to test and see that everything is perfect before sending it to temple. One day her father, the priest found out what she was doing and reprimanded her harshly for sending used garlands to the temple. He ordered Kodhai to stop the practice and send only freshly prepared garlands to the temple. The next day, however something curious happened. When the freshly prepared garlands were offered to the deity, Lord Ranganathan felt something amiss and refused them – “Where was the scent of the girl, who would be his future wife, in the garland?” Lord Ranganathan decided to take some action. He appeared in the priest’s dream and asked him to use garlands only after (andal) his daughter has worn it. Sure enough, the lord came to wed Andal on an elephant. The bride, Andal, was taken to the Srirangam temple where she entered the sanctum to merge with Lord Ranganathan and be his forever. Till today, this love story is celebrated with much pomp and grandeur during Andal Kalyanam, an important ritual observed in Sri Ranganathaswamy Temple on Bhogi Pongal.

The cursed diamond of Srirangam Temple

The biggest mystery surrounding the Srirangam Temple is perhaps that of the Orlov Diamond. It is one of the most daring jewel heists in the world and the Orlov is supposedly a cursed diamond. The legendary gem came from the famous Golkonda mines and was roughly the size of half a chicken egg. It was embedded on the Ranganathan idol of Srirangam Temple and was stolen by a French army deserter and a Hindu convert. The converted Hindu Frenchman had worshiped at the temple for many years before stealing the diamond and fleeing to Chennai (then Madras) where he sold it to a merchant. The diamond then changed many hands before getting purchased by the Russian Count, Grigory Grigorievich Orlov for the Russian empress, Catherine the Great. The empress was so pleased with his gift that she named the diamond after him and had it embedded in her Imperial Sceptre. Today, it is a part of the collection of the Diamond Fund at Moscow Kremlin. Though many people discard this legend as an exotic tale made to create hype over the unusual gem, its allure is undeniable

Recommended Read: Explore Russia and all its glory

Though today there are no gems on display or Meera like tales of love celebrated, the Ranganathan Temple of Srirangam is a visitor’s delight. It is a Dravidian architectural wonder, gigantic in size and resplendent in beauty and many believers find deep spirituality in its peaceful sanctuaries. So irrespective of whether you are a beauty seeker like me or a devotee, just check out the Srirangam Temple timings and say your prayer. You will not come back empty-handed.

My roots belong in Srirangam Temple.

How to Reach – Trichy and Chennai are the nearest airports. Srirangam has a bus station and the nearest railhead is in Trichy. Srirangam / Trichy is linked by NH45, Nh47, NH210, and NH227 (National Highway). The distances from neighbouring cities are Chennai – 324 km, Bengaluru – 335 km, Coimbatore – 213 km, and Madurai – 143 km.

Where to Stay – There are plenty of hotels, guest houses, Yatrinivas and homestays available in Trichy.

Notable Festivals – Vaikunta Ekadeshi – Margazhi (Dec / Jan). This is a must-see attraction which draws thousands of devotees. The annual gold ornament cleaning festival of Jyestabisheka – Aani (June / July). Brahmotsavam – Panguni is held in March / April and the annual chariot festival of Rathothsavam – Thai in Jan / Feb. Vasanthothsavam – Vaikasi is in May / June and Chitra Poornima is also held annually.