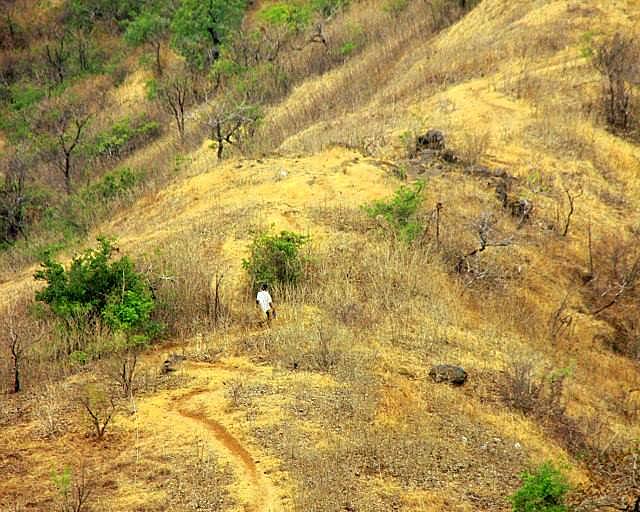 Lonavla spring and a tree house

Recently, I read a Facebook post by fellow blogger, Abhinav Singh of A Soul Window, saying that he does not mock touristy destinations. Instead, he discovers beauty in what lies beyond their touristy aura. I found his statement to be as good as gold. More than often, travellers (and travel bloggers) label a place off as touristy and do not bother to explore its layers. But, there is always more than what meets the eyes and by taking time to simply get lost in “touristy” destinations, one can discover beautiful travel stories.

Personally, I cannot claim of being very fond of touristy places and have often deliberately avoided them. However, one destination (and a trip) opened my eyes and helped me change my perception. That place was Lonavla in Maharashtra and I visited it once in the height of dry yellow Marathi spring. That trip created many “first” impressions for me and I also encountered the majestic beauty of the Western Ghats, a place I had not been before. Stretching over 1600 kilometers in the western part of India, the Western Ghats is a life nurturer. The UNESCO World Heritage Site has been sustaining life in that part of the subcontinent for ages and it is truly the backbone of Western and Southern India. The mountain range which extends over Maharashtra, Goa, Karnataka, Kerala and Tamil Nadu, starts at Gujarat border and ends at Kanyakumari, the southernmost tip of India. Running almost parallel to the west coast, Western Ghats is one of the 8 bio diversity hot spots of the world and is blessed with over 5000 species of flora and 700 species of fauna. Many of these are endemic (found only in that part) and at least 325 globally threatened species call it home. Needless to say, many beautiful hill stations, sanctuaries and national parks dot the mountain range and it is supposedly a visual delight during monsoon.

Technically Western Ghats are not mountains, but a jagged nearly continuous edge of the Deccan Plateau. It is believed to have been created around 150 million years ago when the super continent Gondwana disintegrated and India broke away from Madagascar, making the Western Ghats look like a chain of abruptly broken off cliffs. A previously densely forested area, Western Ghats used to have a very healthy and diverse tribal life which unfortunately got diminished as civilization started its ruthless encroachment. Large tracts of forests were cleared for coffee, tea and teak plantations thus drastically changing indigenous lifestyle and topography of the place. Hydel power projects changed courses of its rivers and lakes and its incredible wildlife (tigers, leopards, civets, elephants, sloth bears etc) started disappearing at a devastatingly fast rate. Today its shola grassland and forests (unique stunted tropical montane forests and rolling grassland) are nearly all destroyed and the Silent Valley National Park in Kerala remains the last tract of virgin evergreen tropical forest in India.

Because of its rivers, streams and waterfalls Western Ghats is most spectacular during the monsoon when lush greenery, mists and rain paint a very romantic picture. I have visited Lonavla in both summer and monsoon but it was its dry golden beauty which got embedded in my mind forever. It was a hot April day when I landed at Mumbai airport and the Bollywood city was seething under an oppressive coastal heat. I immediately left Mumbai to head towards my destination and the coastal mugginess soon got left behind. Located on the Mumbai-Pune expressway, Lonavla is just 96 kilometers away from Mumbai and 64 kilometers from Pune. Its close proximity makes Lonavla one of the most popular weekend getaways for residents of both the cities and it gets pretty crowded on holidays.

Lonavla is derived from the Prakrit word, Len which means “a resting place carved from stone”. It was discovered by the British Governor of Bombay Presidency, Lord Elphinstone who used to go there to escape Mumbai’s muggy summer heat. Because of its strategic location and altitude, Lonavla was highly treasured by the Maratha, Peshwa and Mughal rulers and the area is riddled with forts and stories of its brave “mavla” warriors. Even today, it is an important defense base and is home to INS Shivaji, the Indian Navy’s Premier Technical Training Institute.

The little hill station has been featured in countless Bollywood movies and while I was aware of its popularity, its beauty came as a surprise. The drive from Mumbai to Lonavla took around 4 hours and it went through cotton fields, mango orchards and cloudless blue sky of Maharashtra plains before slowly going uphill. It was a hot day and Maharashtra wore a dusty shade of green. Cars, buses and trucks crowded the broad smooth road and the ghats appeared slowly in softly rolling rows. As I went higher the green speckled plains got left behind and the hills offered stunning views of the entire region. The ghats wore a brilliant shade of gold as the summer heat dried off its unique grassland and rocky outcrops jutted in bizarre shapes. Real estate seemed to be booming there and the beautiful serene valleys were scarred with towering housing complexes (and more under construction). Heat made the golden hills shimmer in the horizon and a mild haze floated dreamily over the plains. A few tunnels appeared and the expressway branched off in different directions. Soon Lonavla town appeared and ugly block like hotels marred the picturesque hill town’s beauty. Billboards crowded the skyline and cars snaked through its narrow lanes.

Lonavla is famous for caramelized peanut hard candy called chiki and these were sold in bulk from every nook and corner of the town. Cars honked, people yelled as tourists carelessly crowded in front of chiki shops. Thankfully I managed to get out of the ordeal soon and drove deeper into the ghats. The roads became quaint, tree shaded and bougainvillea splashed bright pinks and reds. Lonavla’s din got melted away and only cuckoos sang riotously in the summer noon. INS Shivaji came soon and we saw the receding Tungarli lake change colours in the shimmering heat. I lost track of the route quickly and after the famous Tiger Point remembered only the incredible forests, rolling hills and the stunning cliffs. Grass waved in the breeze like fields of gold and clumps of trees made dark, fairy forests. The play of grassland and stunted trees was an incredible patchwork of green and gold and I hardly noticed the small obscure villages interspersed between them. I reached my eco resort, The Machan soon and it had one of the most beautiful settings, I have ever come across in a property. Located in a sea of lush green and surrounded by cliffs, The Machan resort was absolutely incredible.

Wooded, serene and secluded, the resort had pockets of tree houses overlooking a ridge, cottages and lots of forest trails. I stayed at one of the tree houses/machan and used to wake up every morning to bird songs. Flowering trees surrounded the machan like a fragrant cover and shielded me from prying eyes. Sound of in house wind mills used to fill the day and at nights countless invisible creatures sang into the darkness. Strangely shaped mountains loomed over me and I could never get enough of them. Twisted, bent and often top heavy my afternoons were always spent staring at the green ridge and the incredible cliff faces. The tree house was pretty unique too and was as close to nature as possible. Although it was air cooled, the drafts blowing in from the ridge kept the room pleasant even on hot summer noon and big butterflies used to fly in by dozens. Fat moths used to crowd the glass walls at night and countless stars all around me made it seem as if I was floating in space. Flowers used to drop on me as I used to read on the deck, fireflies used to light up the evenings and few fruit bats had spent some nights with me in my room. I used to laze the Machan days away, going for small hikes, nature walks and counting stars while snuggling in sleeping bag under the stars on my observation deck.

Birds, stars and fire fly lit nights made my stay most romantic and only once did I venture out to visit the famous Tiger Point. A popular viewpoint in Lonavla, Tiger Point offered beautiful panorama of the ghats and valleys and had a few snack shops which came alive at sunset. Although the sublime sunset from Tiger Point was pretty, the heartless littering of the Western Ghats disappointed me very badly. I did, the only things which could possibly be done at Tiger Point – talk, have cups of tea and plates of onion fritters and gawk at people drinking, playing loud music and trashing the place like a giant waste bin. I never went back to Tiger Point again and chose instead to play with the hotel dog Klutz, reading or napping on the hammocks. The staff although exquisitely polite, were non intrusive and discreet and it was only over a game of Scrabble with the manager that I came to know of Machan’s incredible story. Created by an environment friendly hospitality group, the resort was built on a once destroyed (by overgrazing, repeated slash and burn cultivation) 25 acres of land. It took 2 years of tree planting, weeding, pruning wild flora, digging water holes for animals and implementing eco friendly alternative power methods to re create the peaceful, lush oasis that it once was.

Solar panels, windmills and water harvesting system turned things around for the destroyed land and soon the area had 20,000 indigenous fruiting/flowering trees. Wildlife returned too and Klutz spent his days busily running after rabbits, porcupines, mongoose and grey langurs. It was a complete bird paradise and there were plenty of frogs (including the endemic tree climbing frog), snakes, crabs and insects. The manager claimed that a few barking deer who were slowly returning back to their habitat had made the resort grounds their home. For me, the enchanting love story of Machan and its surroundings was beautiful enough and I loved its profusion of blooming wild orchids and outdoor dinners with hanging lanterns and wooden picnic tables. A place is best enjoyed with time, peace and serenity of nature and needless to say, the beautiful combination of Western Ghats and golden spring days made it the most memorable travel experience.

Lonavla and the rugged Western Ghats

TRAVEL TIP – The Machan is located near Amby Valley, a bit outside Lonavla town. It is not very easy to find and can be best accessed by taxi or own car. It is a luxury eco resort which has incredible natural surroundings, peace and awesome accommodation facilities. Apart from the guided treks, nature walks and birding tours offered by the resort, star gazing and cycling around the Western Ghats can also be done. Koraigad Fort, Lohagad Fort and Karla and Bhaja caves make interesting day trips from there. For more details check out http://www.themachan.com/index.php While in Lonavla, it is worthwhile to try out the locally made crunchy chikis.

Was a treat for the senses.

It was surrounded by flowers

The summer was at its height

And Lonavla was a patchwork

Of green and gold.

Used to fill my days

And evenings came with