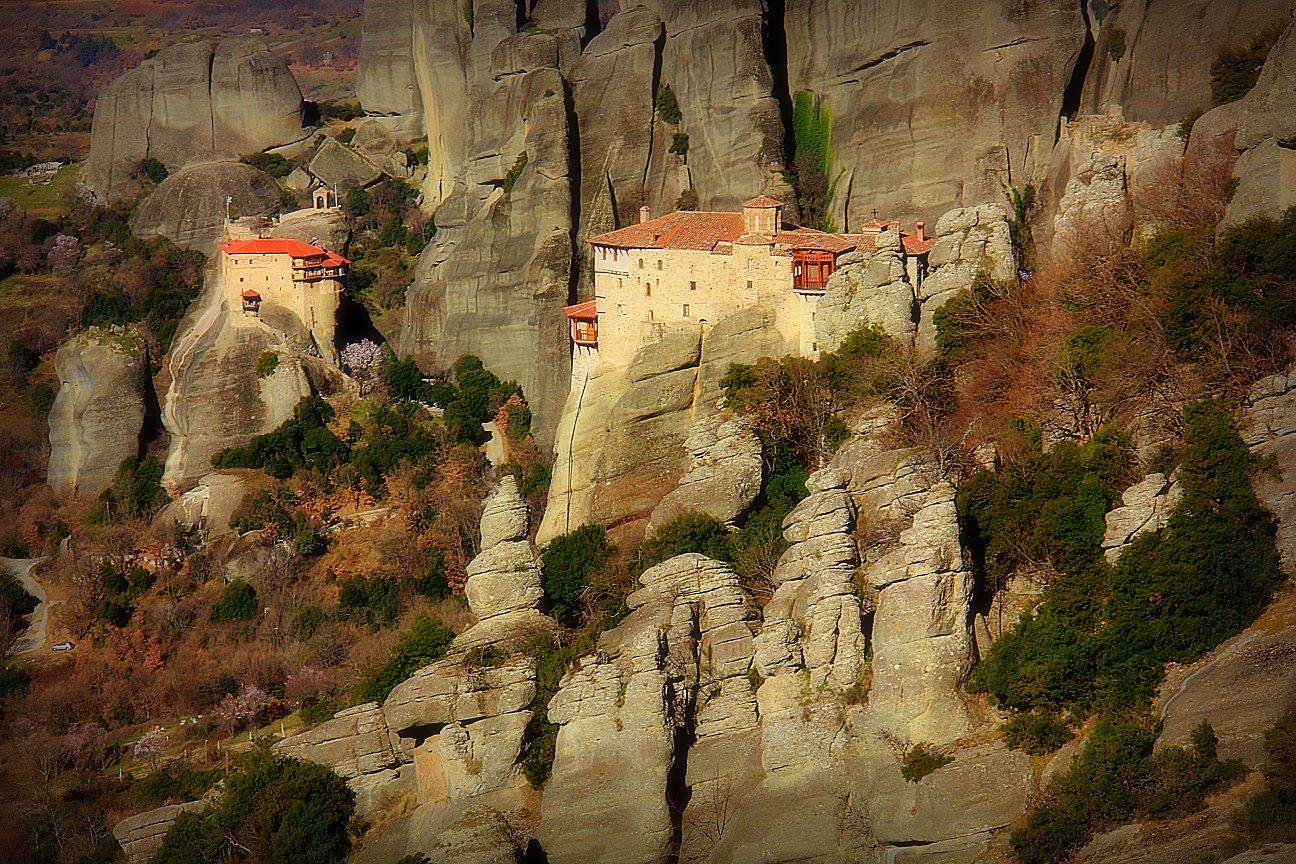 Call me travel spoilt, but I did not know what to make of Meteora. It was undoubtedly beautiful and filled with rich history, but I somehow missed the magic which most people associate with the site. I found the landscape of smooth jagged pinnacles of sandstone rocks to be comfortingly familiar and all the other visited destinations with similar beauty came to my mind. Its old cliff top monasteries too reminded me of many such other constructions and I came back from Meteora, feeling quite disappointed.

This disappointment came to me as a mild shock, since I had very eagerly looked forward to Meteora. It was one of the places, that I had lusted after for a long time and had battled fatigue, nausea and tiring Greek road blocks to reach there. The drive from Delphi to Meteora was a long and torturous one and it was riddled with road blocks which delayed us by hours. Thus we reached the jumping off base of Kalambaka, very late in the night and had to wait until morning to catch a glimpse of the much talked about natural beauty of Meteora.

Touted as one of the most jaw droppingly beautiful places of Greece, Meteora is listed in the UNESCO World Heritage Site. It‘s massive rocks loom at a height of 1200 feet above the town of Kalambaka and they create a forest of grey stony cones and softly rounded cliffs. These unusual natural phenomenon are results of remnants of river sediment which once flowed into a prehistoric sea that covered the plain of Thessaly. That was around 25 million years ago and throughout ages, these sediments have got moulded into bizarre shapes due to the combined effect of fissuring from tectonic-plates and River Pinios erosion.

You may also like : Visiting the centre of the earth at Delphi

Some of the crests of these rocky pinnacles are topped with ancient monasteries and though there were initially 24 of them, only 6 buildings have made it through the centuries. These extraordinary constructions have been built on seemingly inaccessible places and Meteora literally means “suspended in mid-air”. Meteora monasteries date back to the 14th and 16th centuries and they were started by a great monk named Athanasios Koinovitis. Sometime during the 14th century, Athanasios came to Meteora in search of local hermits who were very popular regionally. He brought with him a band of followers and they were all taken aback by the astounding free climbing skills of the hermits. The ascetics who lived in caves in Meteora were great climbers and Athanasios immediately foresaw an opportunity to collaborate with them to build a monastery which would be seemingly inaccessible. It would be perched atop a rocky crest and he would be able to meditate there in peace with his followers.

So he employed the hermits as climbing guides and with their help the visitors set about conquering the surrounding heights and building their safe haven of worship. Thus, between 1356 to 1372, the Great Meteoron Monastery was born. It‘s inaccessibility proved to be its strongest virtue and years later, advancing Turkish army made more monks to flee and take shelter there. Eventually, over the period of time, 24 monasteries were functioning at Meteora and their steep vertical perch provided protection from any kind of attacks. A whole complicated operation of ropes, pulleys, baskets and folding ladders were used to lift worshippers and supplies to the monastery and access could be denied whenever threat was detected.

More from Greece : Greece on my plate

This method worked successfully for many years and the Meteora school of Orthodox monks survived centuries of battles and persecution. Today, the 6 remaining monasteries are segregated between male monks and female nuns and every year tourism brings hordes of awe struck visitors to their door step. I was one of the travellers who visited Meteora last year in spring and the short duration of my stay afforded me fleeting stops to various monasteries. Most had beautiful old frescoes decorating their inner sanctums and the views from the tops were mind blowing. My Meteora impressions unfortunately stop there and I found the site a bit too crowded and way too much commercialised. These made Meteora lose much of its sheen in my eyes and I had longed for the still quiet sanctity of Delphi.

TRAVEL TIP – Meteora is a beautiful Greek destination and a pilgrimage site. Encased in a surreal of strange rock formations, the holy site contains 6 old monasteries which are of high religious importance to many Christians around the world. It is a survival and preservation symbol of the 2000-year-old Christian Orthodox creed and appropriate dress code suitable for a holy place is advisable when visiting Meteora. The entrance fee for all monasteries is 3 Euro per person.

This is Meteora through my eyes.