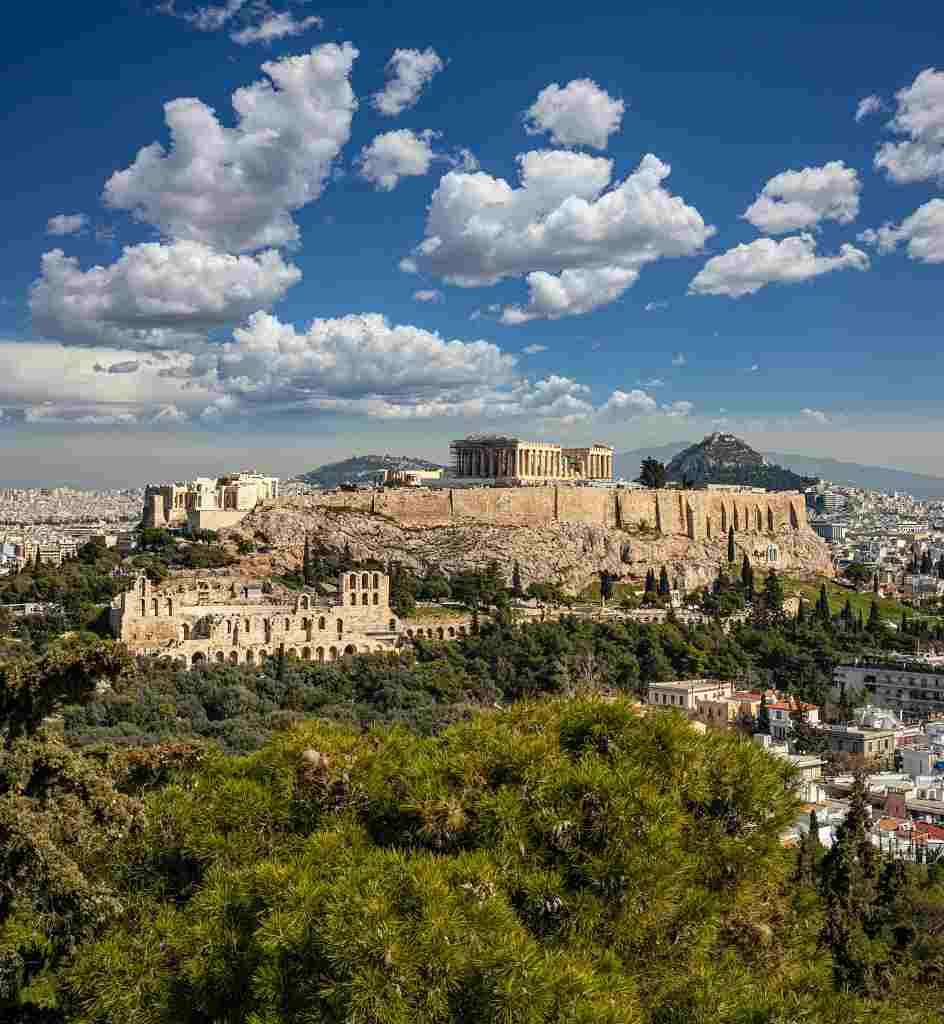 Things to know about the Acropolis before visiting

Athens is a city of magnificent views and none surpasses that of the Acropolis with the Parthenon at its crown. Considered one of the most important sites in the Western world, this epic monument soars above Athens and is visible from almost everywhere within the city. Listed as a World Heritage-listed site in 1987, the Acropolis is also breathtakingly lovely. Since most of its monuments are constructed in white Pentelic marble, they sort of reflect the colour of the day. Gleaming beige in the afternoons, they take on a golden hue at sunsets, and at night, when lit up with floodlights, Acropolis takes the breath away.

Pericles’s dream city for the gods

Breathtaking as these monuments are nowadays, they are but faded remnants of Pericles’s dream city – one for which he spared no expenses. He was an ardent patron of arts and literature, and it was because of his efforts that Athens rose to fame as the educational and cultural center of the ancient Greek world. His Athens revival project was ambitious and it was he who was responsible for most of the surviving structures on the Acropolis, including the Parthenon. Pericles showered the best on Athens – only the best materials, architects, sculptors, and artists were selected for embellishing the city dedicated to the cult of Athena. It was a showcase of lavishly decorated buildings, larger-than-life statues, and other stunning details.

The word Acropolis consists of two words: ákron, which means the highest or the topmost point, and polis means the city. Loosely translated, Acropolis is a ‘high city’, and its location on a flat-topped rock that rises 150 m above sea level, justifies its name. Acropolis is in fact a generic term used to describe a settlement or citadel built on a hill that usually has very steep sides and was often chosen for defense. There are many other acropoleis in Greece and during ancient times the Athenian Acropolis was called Cecropia, after the legendary serpent-man and supposedly the first Athenian king, Cecrops. Given its significance, nowadays, the Athenian acropolis is simply called the ‘Acropolis’.

According to the archaeologists, Acropolis was first inhabited in the Neolithic times (4000–3000 BC). The earliest artifacts found on the Acropolis by archaeologists go back to the Middle Neolithic period sometime between 7,800 and 7,300 years ago. During the Mycenaean era – around 1500 BC – it was fortified with Cyclopean walls and enclosed within were a royal palace and temples dedicated to the cult of Athena. Homer is said to have referred to this fortification when in Odyssey 7.81, he mentioned the “strong-built House of Erechtheus”. There has been evidence of people inhabiting the Acropolis by the 9th century BC and its earliest monumental buildings were constructed here during the Mycenaean era. This habitation thrived until 510 BC when the Delphic oracle declared it the sole province of the gods, unoccupied by humans. The Persians came in 480 BC and they sacked the city of Athens. On the eve of the Battle of Salamis, they reduced the buildings on the Acropolis to ashes, and therefore, not much is known about the architectural appearance of the Acropolis until the Archaic era.

I loved Athens and the Acropolis

The revival of the Acropolis

After the disastrous Persian attack and following success at the battle of Eurymedon, the wheels of history turned and Athens once again flourished. Throughout the 5th century BC, the city-state experienced a period of stability and it came to be known as the ‘Golden Age of Athens’. Pericles was a prominent statesman and general of Athens at that time. He initiated the reconstruction of the buildings on the Acropolis – a marble city dedicated to the glory of the gods and he set his heart and soul into the project. His ambition was to transform the Acropolis into a city of temples and so stunning was the end result, that it came to be regarded as the peak of Classical Greece.

50 years to rebuild a city from the ashes

Interestingly, the reconstruction of the Acropolis, as massive as the site was, took only 50 years. The project was supervised by two well-known architects, Callicrates and Ictinus, and they teamed up with the renowned sculptor Phidias. The first step the Athenians took toward reconstruction was to salvage whatever was left after the Persian attack. They used the columns and other architectural remains of the buildings to rebuild the north curtain wall. The remains of statuary and other votive offerings were buried in deep pits to create the artificial platform on which the later buildings were built. These pits were excavated by archaeologists, and the artifacts recovered from there are known as the ‘Persian Debris’. These are on display in the Acropolis Museum.

Acropolis passed through many hands

The reconstructed monuments of the Acropolis survived unaltered for around a thousand years until the Romans came. During the reign of Emperor Justinian, these temples were converted to Christian worship. It is believed that many fifteenth-century Italian princes held court in the Propylaia, and the same quarters were later used by the Turks as their commander’s headquarters and as a powder magazine. The crown jewel of the Acropolis, the Parthenon underwent similar changes as foreign invaders came and went. It went from Greek to Roman temple, from Byzantine church to Frankish cathedral, before several centuries of use as a Turkish mosque. The Erechtheion, with its graceful female figures, was once used as a harem. A Venetian diplomat described the Acropolis in 1563 as “looming beneath a swarm of glittering golden crescents”, with a minaret rising from the Parthenon.

Sadly, such magnificence was greatly reduced over the years due to foreign occupation, pilfering by foreign archaeologists, inept renovations following Independence, the footsteps of millions of visitors, earthquakes, and, more recently, acid rain and pollution. The biggest blow fell in the 1600s, when the Venetians attacked the Turks, opening fire on the Acropolis and causing an explosion in the Parthenon – where the Turks had been storing gunpowder – thus damaging all the buildings. Over centuries souvenir hunters and foreign archaeologists from all over the world thronged to the Acropolis to strip down the monuments to the bare ruins seen today. The controversy of the Elgin Marbles has its origin in the activities of Western souvenir looters at the beginning of the 19th century. The most prominent looters entangled in the controversy were the French ambassador Fauvel, gathering antiquities for the Louvre, and Lord Elgin squirreling away sculptures from the Parthenon. As the British Ambassador to Greece at that time, Lord Elgin obtained permission from the Turks to excavate and remove stones with inscriptions. He looted with gusto, by misusing this concession and made off with almost all of the bas-reliefs from the Parthenon’s frieze, most of its pedimental structures, and a caryatid from the Erechtheion. He sold all of these later to the British Museum. His pilfering raised a storm of controversy even then and drew attacks even from his prominent countrymen, Lord Byron being one of them. After the completion of the new Acropolis Museum, the Greeks undertook a campaign to pressurize the British Museum to return the ‘Elgin Marbles’ in vain. The British Museum counter-argued that to return them would be to set a precedent that would empty virtually every museum in the world. And Greece has not yet received its stolen ‘Elgin Marbles’.

Acropolis has a stunning and almost perfect symmetry

How to reach the Acropolis

There a two separate entrance gates:

You can get your ticket at the ticket offices on-site or online (https://etickets.tap.gr/). The online ticket has a precise date on it and it cannot be changed. In order to skip long queues, especially in summer, it makes sense to buy the entrance ticket online. Getting a combined ticket since it has a long validity and you can adapt the time of your visit to less crowded hours. Take a guided skip-the-line tour to get rid of the hassle completely.

Be at the main entrance at 8 in the morning right when it opens to be able to explore the site without too many tourists around. Another good time is 1 or 2 hours before closing time. Make sure to buy your ticket online and in advance to be able to enter immediately at the opening time without waiting in a queue. Avoid midday at any cost since it is the most crowded time for visiting Acropolis. Check the weather forecast in winter before planning your visit since rain can make the ground muggy and slippery and there is no shelter at the top.

What to see in the Acropolis

Practical Tips for visiting the Acropolis