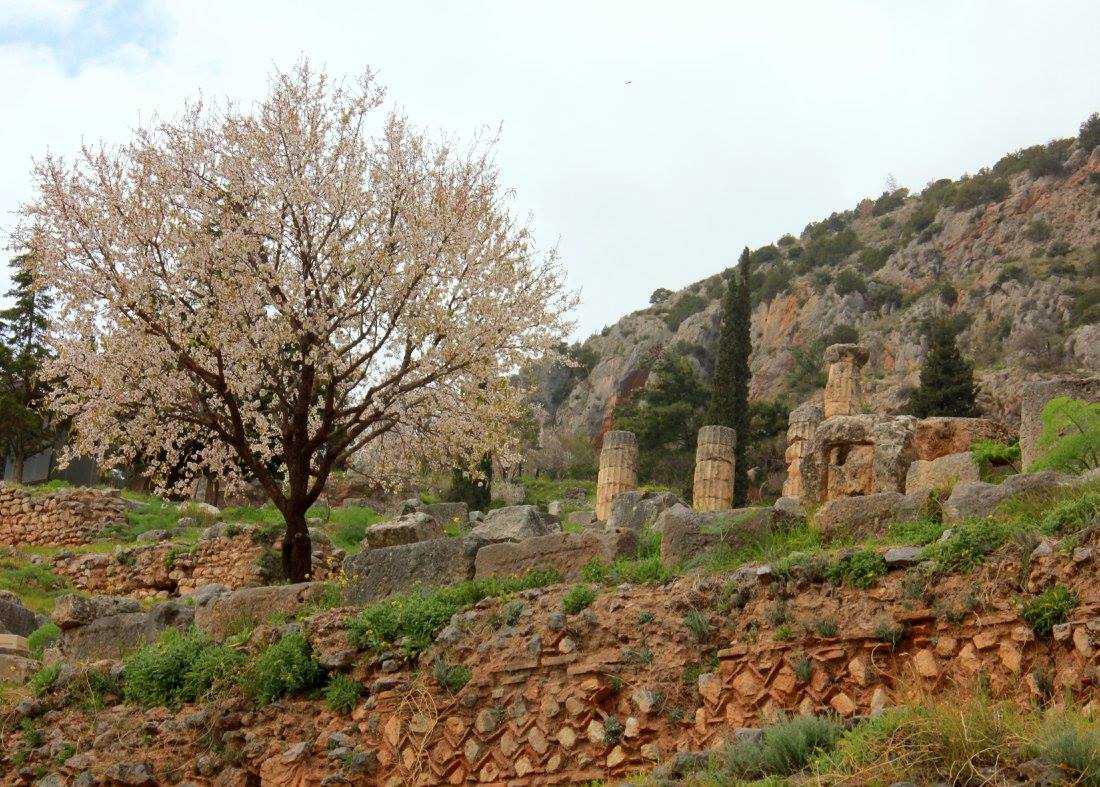 Visiting the centre of the earth at Delphi

To like Delphi is very easy, but to understand it, is like reading an entire high brow book and not getting much of it at one go. Even after tediously plodding through the pages, you miss out on most of the plot, chronological order and sense. It makes you wonder, if you are not as bright as you think yourself to be and so, you continue to either keep reading the book until you figure it out or just put it away quietly. Most prefer the second option, when it comes to Delphi, and the ancient Greek religious sanctuary is a tough riddle to decipher. Its historical and mythological importances are so deeply enmeshed that you tend to lose your way among its stories and myths and then there are various Greek legends attached to it. Try imagining Zeus, Apollo, Mother Earth, Pythian Games (very similar to Olympic Games), historical course changing wars and powerful kings connected with one site and you have the mystical special place called Delphi.

Located on the mighty Mt. Parnassus near the Gulf of Corinth, the spiritual sanctuary was home to the famous oracle of Apollo where the Pythian priestess muttered cryptic predictions to city states and individuals, in order to guide them in their important decisions. Additionally, athletes from all over ancient Greece met there once every four years to compete in the famous Pythian Games. The the site which has been inhabited since the late Bronze Age, gained religious importance in 800 BC. The original name of Delphi was supposedly Pytho and it was named after Python, the serpent which was guarding the site. Apollo is believed to have killed Python and it was renamed as Delphi i.e dolphin, the form which the young god took to arrive there.

Bone of contention between

Delphi is also believed to be the centre of the world in Greek mythology and the historical twists and turns influenced by it are enough to make your head spin. Like a real potboiler, it‘s thrill heightens with every new discovery and the site‘s layered mythology, fun facts about its oracles and architectural grandeur are guaranteed to make you say, “Whoa..slow down”.

Funnily enough, the best way to experience Delphi is by taking it slow. Arrive, take in the beauty, the magical aura of the place, start exploring and let the site reach out to you. Many travellers and visitors swear that Delphi spoke with them, revealed its mysticism and made them feel its special powers. And there is no doubt that Delphi is a very special place. An eternal flame had burned there, in the Temple of Apollo and Pythian priestess delivered world famous oracles at its site. The priestess was an elderly village woman, who inhaled ethylene gasses and chanted her prophecies from a tripod. It was placed right above the chasm in which Python, the serpent supposedly had lived. Coincidentally, light hydro carbon gasses were also released from the same chasm over which Pythia sat and she would consistently inhale the trance inducing vapours before uttering oracles. A trusted priest would then interpret her mutterings in hexameter verse and Delphi oracles always had more than one interpretation. They were, however regarded as closest to the truth in the world of pre classical Greece and this made Delphi rise in importance.

Though Delphi‘s importance peaked during the 6th century BC, throughout ages the site had witnessed steady stream of faithfuls arriving there to seek divine directions. Delphi served both city states and individuals alike and much advice was dispensed in matters of war, worship, business, marriage, love and voyages. Upon arrival, the pilgrims would pay a fixed fee which included sacrifice of a goat, boar or a bull and it was mandatory for the visitors to wash their hair in the water of the nearby Castalian spring, before entering the holy site. Murderers had to wash their whole bodies and the pilgrims submitted their queries inscribed on lead tablets. Such was the popularity of Delphi‘s oracles, that its affluent patrons paid huge sums of wealth to bypass huge queues which snaked to the holy site. Wealth and importance made Delphi become the reason of conflict between Athens, Phokia and Sparta.

They all wanted Delphi and this prompted a series of Sacred Wars. However, with the King of Macedonia‘s conquest of southern Greece, this rivalry got dissolved forever and Delphi stepped down to a less godly level. Under, the Macedonian and Roman rule, the oracles delivered at Delphi became increasingly domestic and trivial in nature and patrons sought advice on marriages, loans, health and voyages. The Romans, who preferred the treasures of Delphi more than its oracles, plundered the site heartlessly and in 391 AD, Theodosius ended its spiritual influence forever.

Located on the mighty Mt Parnassus

Like most archaeological sites in the world, Delphi too slowly got lost in the pages of time until it was rediscovered in the end of the 17th century. Excavation work commissioned by the French School of Archaeology began in 1892 and by 1903, most of the restoration work was complete. Delphi once again rose to fame and the eagle nest Greek town became a popular tourist attraction. Bus loads of day trippers from Athens visit Delphi every day and the site combined with Meteora make one of the most sought after short tours from the capital city. It is most busy during summer months and on clear days sweepings views of the sea can be seen from its cliff side location.

I visited Delphi on a cold February morning of 2016. Spring had not yet started in full swing and the sky was grey with blustery clouds. Delphi was empty except for a few stray cats and wayward visitors. Wildflowers carpeted the slopes and the valleys in various colours and plums and cherries were heavy with blooms. Fluffy masses of delicate pink and white flowers poked their heads at every hair pin turn of the journey and the sharp crags of Parnassus were beautifully golden. Though intrigued by the fantastic ancient Greek mythology, my visit to Delphi had nothing to do with its special spiritual fame. Athens was in a political turmoil at the time of my visit and road blocks had crippled the capital city. An escape from Athens meant going away somewhere nearby and visiting Delphi (with Meteora) seemed like a very good idea.

Being newly pregnant, I opted for a small group tour and it also helped me escape the hassle of navigating out of roadblocks on my own. The drive to Delphi was forgettable. Greek mainland countryside fled past in various states of disrepair and occasional lively towns were interspersed in between. Delphi arrived with breathtaking views and dense olive plantations and we quickly huddled towards the famous museum of the popular archaeological site. Rivalled only by Athens Acropolis, the museum contained many rare and exceptional exhibits and it provided the much needed warmth before the site exploration.

It is the centre of the earth.

Delphi was scattered along the steep slopes in various levels clung and the Sanctuary of Apollo was the gateway to them all. Beyond, the Sanctuary of Apollo stood the Treasury, the Bouleuterion or the council house, the Sanctuary of Gaia and so on. Somewhere between them, stood the proud remains of Athenian Stoa, stadium, theatre and finally the fringes of cool, dark pine. A winding way lead to the Marmaria or the marble quarry and further away was the famous Castalian spring.

I found Delphi to be a mixed bag of impressions. The natural beauty was jaw dripping and its archaeological layers were difficult for me to comprehend in one visit. Then, there was the aura of its gripping mythological power and I kept stumbling over all these facets. I gave up hiking all the way to the top after climbing a few tiers and chose, instead to sit on one of the benches alone. With most visitors gone, silence and a few plump stray cats remained at Delphi and the site was completely mine for some time. There was no doubt in my mind that Delphi was a very ‘special’ place. Simply sitting there among the ruins and breathing in the sweet smell of wild flowers and mountain pines felt magical. Though cold and gloomy, the sky cast a fine silvery light and Delphi glowed like columns and walls of gold.

They say, in ancient Greece, that Zeus, the king of Gods, released two eagles, who flew in opposite directions, eastwards and westwards. Both of them met above Delphi and after impaling one another with their beaks, they crashed to the ground. Zeus then threw the Sacred Stone, marking the centre of the earth – the navel of the world and visiting Delphi, was indeed like going on a trip to the centre of the earth; a free fall into history, mythology, human greed and beliefs.

Scattered along the steep slopes

Delphi was an unforgettable experience.

TRAVEL TIPS – Delphi is an UNESCO World Heritage Site near a modern village bearing the same name. It is around 178 kilometres from Athens. It is connected to Athens (3 hours), Thessaloniki (4.5 hours) and Patra (2 hours) daily with KTEL coaches. Daily train services from Athens and Thessaloniki stop at the train station of Amfissa and a local bus connects the station to the site.

Most companies offer day trips from Athens to Delphi and the price varies highly depending on the season and comfort level. You can pay from 80-150 euros for the trip and the one way ride takes about 3 hours. These trips include a guided tour of Delphi museum, the site and transfer. You can also buy a combined tour of Delphi and Meteora which includes transfer, guided visit to both the places and accommodation at Meteora.

Things not to miss at Delphi are the Charioteer and the Sphinx at the museum, the Temple of Apollo, Ancient Stadium, Ancient Theatre and the Athena Pronea Sanctuary. There are quite a few hotels and guesthouses in modern Delphi and the restaurants there offer local cuisine. The prices may seem steep as it is a popular tourist destination. Many like to go for hikes, cycling trips and treks into the mountains from there.

The first sight of Delphi in spring

Took my breath away.

Contained temples of the gods

And was the playground

Of the rich and the powerful.

And covered with flowers

Discovering Delphi on that spring day

Was an experience of a lifetime.