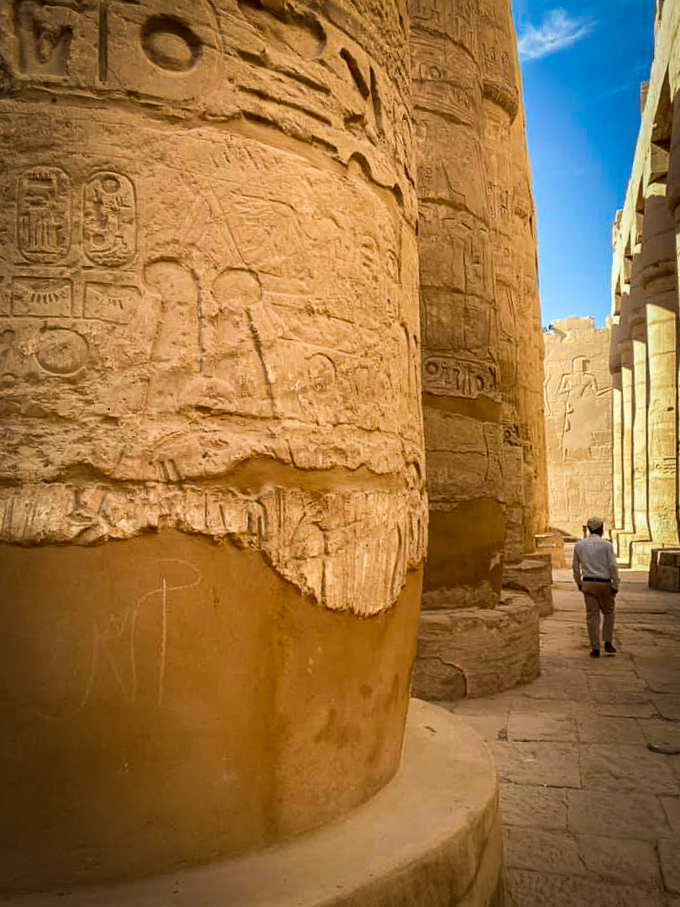 The opulence of Karnak Temple

Walking through Karnak temple in Luxor is like going through the pages of a history book. To understand the importance of Karnak is to know a bit about Luxor. This Nilotic Egyptian city was known as Thebes in the olden times and it was the capital of Upper Egypt during the New Kingdom era (16th century to 11th century BC). Incidentally, the New Kingdom era was the most prosperous time and marked the peak of Egypt’s power. Upper Egypt at that time stretched from the southern portion of Egypt and was composed of the lands on both sides of the Nile that extend downriver between Nubia – until modern Khartoum in central Sudan and Lower Egypt -until modern-day Cairo and Dahshur in the north. Long story short, Luxor was the glorious capital of a very powerful and important kingdom at a time when its power was at its peak. Thebes was so important that it was dedicated to the god Amun-Ra, the most prominent deity of the Egyptian pantheon. And Karnak temple was the crown jewel of Thebes.

To begin with, my nomenclature of the Karnak temple is incorrect. Karnak although most popularly termed as a temple is, in reality, a massive complex of sanctuaries, temples, pylons, and obelisks. It was developed over more than 1,000 years and is the largest and most important religious complex in ancient Egypt. Although the monuments within the complex are mostly dedicated to the Theban triad they also represent the power and importance of their patron pharaohs. Hatshepsut, Tuthmose III, Seti I, and Ramesses II, all contributed significant additions to the complex and the construction continued into the Greco-Roman Period with the Ptolemies, Romans, and early Christians all leaving their mark there. Over the centuries, every pharaoh worth their salt added or amended their constructions to the complex, thus stamping their seal on the kingdom’s most revered religious sanctuary. For Karnak was the house of the gods, and its glories were to be feted by all.

The Pharaonic race to glory

It was like the royal dynastic ‘to do’ thing to build or amend something inside the Karnak temple complex and I believe the choice of locations and grandeur of the structures represented the dynasty’s power. If I think in crude real estate terms, then the more prominent the location, the more money it cost and of course, the monument itself had to be magnificent. Thus, the Karnak temple complex represented a competition in which the pharaohs competed with each other in building the more magnificent complex than his predecessors. Now if I, as a pharaoh invest so much money, time, and effort to create a monument, I would like to cram it with as many details – real – and sycophantic make-belief – about my beliefs, my achievements, and the things I like. Karnak’s patrons did just that and hence it is no wonder that the complex was in constant development and use between the Middle Kingdom (2080–1640 B.C.) and the early Christian period. The immense size of the Karnak temple complex is filled with various architectural, artistic, and linguistic details making it an invaluable historical site and resource for understanding the evolution of ancient Egypt. Because of its long history of construction and functionality, the gods worshipped at the Karnak temple complex range from some of the earliest Egyptian deities to some of the latest, thus offering an impressive presentation of ancient Egyptian religious practices and beliefs.

Karnak Temple is Ipet-Isut “The Most Select of Places”

The site was first developed during the Middle Kingdom (2055–1650 B.C) and was initially modest in scale. However, as the importance of Thebes increased, the Karnak temple complex also expanded. It was known as Ipet-Isut “The Most Select of Places” in ancient times and was not only the location of the cult image of Amun and a place for the god to dwell on earth but also a working estate for the priestly community who lived on site. The main precinct alone had as many as twenty temples and chapels and additional buildings included a sacred lake, kitchens, and workshops for the production of religious accouterments. The main temple of Amun-Ra had two axes—one went towards north/south and the other extended east/westwards. The southern axis went all the way towards the temple of Luxor and was connected by an avenue of ram-headed sphinxes. Karnak temple complex was sacked by the Assyrian and Persian armies and looted and pilfered by early explorers and travelers, who carted off statues and masonry, it still withholds many unique architectural features. For example, the tallest obelisk in Egypt stood at Karnak and it was made of one piece of red granite. Dedicated by the female pharaoh Hatshepsut who ruled Egypt during the New Kingdom, it originally had a matching obelisk that was removed by the Roman emperor Constantine and re-erected in Rome. Another unusual feature was the Festival Temple of Thutmose III, which had columns that represented tent poles, thus showcasing the various war campaigns of this pharaoh.

The three precincts of Karnak Temple

Karnak temple complex is divided into three compounds: the precinct of Amun, the precinct of Mut, and the precinct of Montu. Built on a leviathan scale to house the gods, these three separate enclosures cover nearly three square kilometers. The grandest is the Precinct of Amun and it is a structure large enough to accommodate ten great cathedrals. During those days, it was believed that the god lived there on earth with his wife Mut, and son, Khonsu, who also have temples at the site. The Temple of Amun-Ra is particularly famous for the vast Hypostyle Hall – a spectacular forest of giant papyrus-shaped columns. It was constructed during the reign of Seti I and the hall has 134 massive sandstone columns with the center twelve columns standing at 69 feet. Like most of the temple decoration, the hall was originally brightly painted and some of this paint still exists on the upper portions of the columns and ceiling today. Not every ancient Egyptian had access to this hall, since the further one went into the temple, the more restricted access became.

The up and downward journey of Karnak

While the Pyramids of Giza is the poster child for Egypt, in reality, it is dwarfed by the Karnak temple complex in importance and archaeological details. There is no doubt that Karnak’s magnitude and complexity are due to 1300 years of aggrandizement. At the zenith of its glory, Karnak’s wealth was staggering. A list of its assets during the reign of Ramses III includes 65 villages, 433 gardens, 421,662 head of cattle, 2395 square kilometers of fields, 46 building sites, 83 ships, and 81,322 workers and slaves. Yet only the pharaoh or his representative could enter Ipet-Isut, god Amun’s precinct. After Memphis became the new dynastic capital, Luxor’s temples declined in importance. In later centuries, Ptolemaic rulers and Coptic Christians altered parts of the Karnak complex for their own purposes.

A walk through history pages

A walk through the Karnak temple is seemingly confusing. The great Temple of Amun recedes in an overwhelming succession of pylons, courts, columned halls, obelisks, and colossi, all of which span some thirteen centuries of ancient history. The ruins get denser and more jumbled the further one goes inside the convoluted interiors of the complex. The main thing to remember is that the temple’s main axis is perpendicular to the Nile, with a subsidiary axis running parallel to the river, the two of them forming a T-shape. According to experienced tour guides, the best way to explore the massive Karnak temple complex is to follow the main axis all the way back to the Festival Hall. Make sure to see the Cachette Court of the subsidiary axis. A break for refreshments by the lake is advisable and avoid the sweltering midday heat and mass crowds of day-trippers visiting from the resorts by heading to the temple complex for early morning or the evening. Dawn and dusk provide spectacular lighting around the majestic ancient structures. Keep at least two hours to explore the Karnak complex. Be sure to wear a hat and drink lots of water, as there’s little shade at the site.

Highlights of the Karnak Temple Complex

The Temple of Amun

The Temple of Ramses III and Second Pylon

The Jubilee Temple of Tuthmosis III

At the rear of the Central Court lies the Jubilee Temple of Tuthmosis III, a personal cult shrine of the king. The original entrance is flanked by reliefs and broken statues of Tuthmosis and the Festival Hall, with its unusual tentpole-style columns, have their capitals adorned with blue-and-yellow chevrons. During Christian times the hall was used as a church, hence the haloed saints on some of the pillars. A chamber in the southwest corner contains the replica of the Table of Kings (the original is in the Louvre). It depicts Tuthmosis making offerings to previous rulers although Hatshepsut is strangely omitted. A section of the Jubilee Temple of Tuthmosis III is called the Botanical Garden. It is a roofless enclosure that contains painted reliefs of plants and animals which Tuthmosis encountered on his campaigns in Syria. Across the way is a roofed chamber decorated by Alexander the Great, who appears before Amun and other deities.

Around the Sacred Lake

A short walk from Hatshepsut’s Obelisk or the Cachette Court brings you to Karnak’s Sacred Lake. Its main attraction is a shady and expensive cafe that does roaring business since the complex provides very little relief from the burning Luxor noon sun.