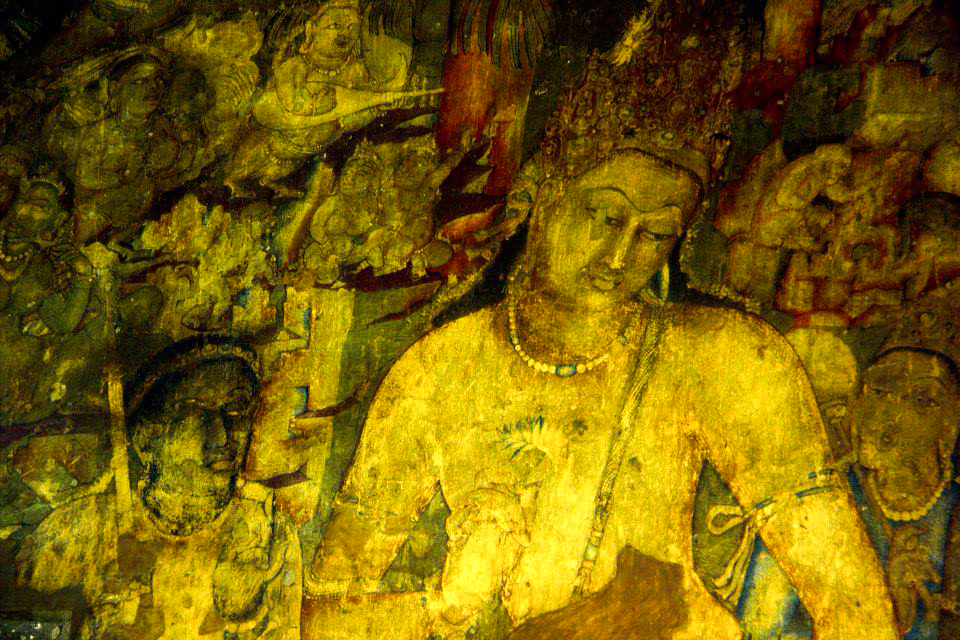 In 1819, when a small group of East India Company troops discovered the Ajanta caves by accident, they brought to light one of the most sensational archaeological finds of that century. The site not only revealed the most extraordinary religious monuments in Asia, but it also showed the world the astonishingly beautiful Ajanta cave paintings. The location of the site is also spectacular. Consisting of 28 colonnaded caves, Ajanta is hewn from the near-vertical sides of a horseshoe-shaped ravine bordering the Waghore river. Five of these caves are chaityas (assembly or prayer halls) while others are viharas (monasteries with attached residential cells). However, not all of them date from one particular period and nearly all of them have different patrons. Caves 8, 9, 10, 12, 13, and part of 15 are early Buddhist caves, while the others date from around the 5th century AD (Mahayana period). In the austere early years of Buddhism, Buddha was symbolically represented by a footprint or wheel of law.

The sleeping Buddha inside Cave 6 at Ajanta

The story of Buddhism in India

What makes Ajanta so spectacular is the fact that such structural beauty has been carved by hand from solid rock. The reason behind this is unknown although historians believe that in the 3rd century BC these caves were already being used as temporary shelters for Buddhist monks who had to take a break in their travels due to heavy monsoon rains. The construction of these shelters was commissioned by wealthy newly converted merchants to whom the casteless new faith offered a respite from the old, discriminatory social order. Initially, these new believers were not large in number, although that changed rapidly when powerful emperors like Ashoka embraced Buddhism. Under the patronage of powerful kings and rulers, in the 2nd century BC, the first large-scale monastery caves were created at Ajanta. These were developed over the years and the construction, embellishment, and architecture of the Ajanta caves depict the blossoming, flourishing, waning, and revival of the Buddhist faith.

The Ajanta Caves were made in two distinct phases. The first set was created during the 2nd century BCE to 1st century CE, and the second series happened several centuries later. In the early days of the new faith, an austere Hinayana school of Buddhism predominated in India. Caves cut in this era were mostly simple chaityas or worship halls with long, rectangular apse chambers and barrel-vaulted roofs. They had two narrow colonnaded aisles that curved gently around the back of a monolithic stupa. These stupas were symbols of the Buddha’s enlightenment and were circumambulated by the monks during their communal rituals.

Inside Cave 19, a Hinayana style chaitya

By the 4th century AD, the more exuberant Mahayana school of Buddhism came into prominence. It included a growing pantheon of bodhisattvas (merciful saints who postponed their accession to nirvana to help mankind towards enlightenment) and there was a tendency to flamboyance. Chaityas were superseded by great viharas or monastery halls, where the monks lived and worshipped. The once-prohibited image of the Buddha in the Hinayana school became far more prominent and colossal icons replaced the circumambulatory recesses. The peak of this opulent Mahayana art marked the end of the Buddhist age. At this time, desperate measures were believed to have been taken to rekindle enthusiasm for the faith.  The exquisite Ajanta cave paintings that depicted stories from ancient scriptures such as the Jatakas (legends relating to the Buddha’s previous incarnations) were a part of this revival movement.

Inside a Mahayana style vihara

Apart from its theological importance, what really makes Ajanta caves so important is its wealth of frescoes. The basic painting techniques used by the artists of Ajanta changed little over the eight centuries the site was in use. The paintings are in “dry fresco” or tempera meaning that they were painted on top of a dry plaster surface rather than into wet plaster. The pigments were all derived from natural water-soluble substances like kaolin chalk for white, lamp soot for black, glauconite for green, ochre for yellow, and imported lapis lazuli for blue. The artists preferred large scenes spreading in all directions from a single figure or group at the center. The ceilings were also painted with sophisticated and elaborate decorative motifs and there are many depictions of the Jataka tales which show the previous lives of the Buddha as a king.

Orientation of the site

It is popularly believed by historians that Ajanta caves were abandoned twice in medieval times before finally coming into prominence in 1819. In 1983 it was designated a Unesco World Heritage Site and since then has been widely visited by travelers from all over the world. These caves are numbered from 1 through 29. The numbered ones belong to the earliest discoveries. The later identified caves have been suffixed with alphabets. The cave numbering is a convention of convenience and does not reflect the chronological order of their construction. During busy times, viewers are allotted 15 minutes within the caves, which have to be entered without shoes. Most of the time caves 3, 8, 22, 28, 29, and 30 either remain closed or are inaccessible. Since the site runs along a steep ravine, there is a fairly uphill walk from the ticket counter to the beginning of the caves. Porters and sedan chairs are available on-site.

On the way to Ajanta caves

By Train: There is no railway station in Ajanta and the nearest railway station is at Jalgaon. It is a major railhead on the Delhi-Mumbai and on Kolkata-Nagpur-Mumbai Railway lines. Plenty of trains are available from all over India to Jalgaon. Another alternative is to reach via Aurangabad Railway Station. Lots of shared auto-rickshaws to Ajanta are available at the government bus station outside the railway station,

By Flight: The nearest Airport is in Aurangabad. It is about 15 km away from the main city of Aurangabad. Taxi services are available at the airport.

From Ajanta Bus Stand to Ajanta Caves: The public buses and private taxis drop you near the parking lot closer to the highway. The caves are around 4 km from there. Just walk towards the market from the taxi stand. You can stock up on food and water from here. There is a bus stand for the shuttle buses right after you cross the market. These buses operate between the market and the caves at frequent intervals. They charge INR 7 for non-AC shuttle buses and INR 15 for AC shuttle buses. It takes around 10 minutes to reach the caves. The shuttle buses drop off their passengers near the ticket counter of the caves.

Carvings inside the Ajanta caves

Entrance Fees and other information

The admission ticket to Ajanta is INR10 for Indian nationals and INR 250 for foreign nationals. Children below the age of 15 are free. Many of the caves at Ajanta do not have proper lighting inside. This is to prevent the degradation of the paintings’ colour. That is why, to see the paintings in Caves 1, 2, 16, and 17, you have to buy a ticket for Rs. 5 as a lighting fee. One ticket is approved for a group of people up to 20 people. It is highly advisable to buy the lighting fee, even if you are alone. Otherwise, you will not be able to see much inside. Although not mandatory, I recommend hiring a good guide for your Ajanta caves trip to make your experience fuller. The video camera charge is INR 25 and it is for outside use only. Still photography is free of charge. Flash photography is prohibited inside the caves. Ajanta Caves are closed on Mondays. The opening hours are 9 am – 5 pm.

Ajanta comprises 30 rock-cut caves. These caves have within them a wealth of the finest works of ancient Indian art. Out of these, the Hinayana-style caves are 9, 10, 12, 13, and 15A. This group belongs to the Hinayana period, the earliest form of Buddhism.

The gorge that contains the Ajanta caves (Dinodia Photos / Alamy)

Carvings inside the cave

The famous facade of Cave 10