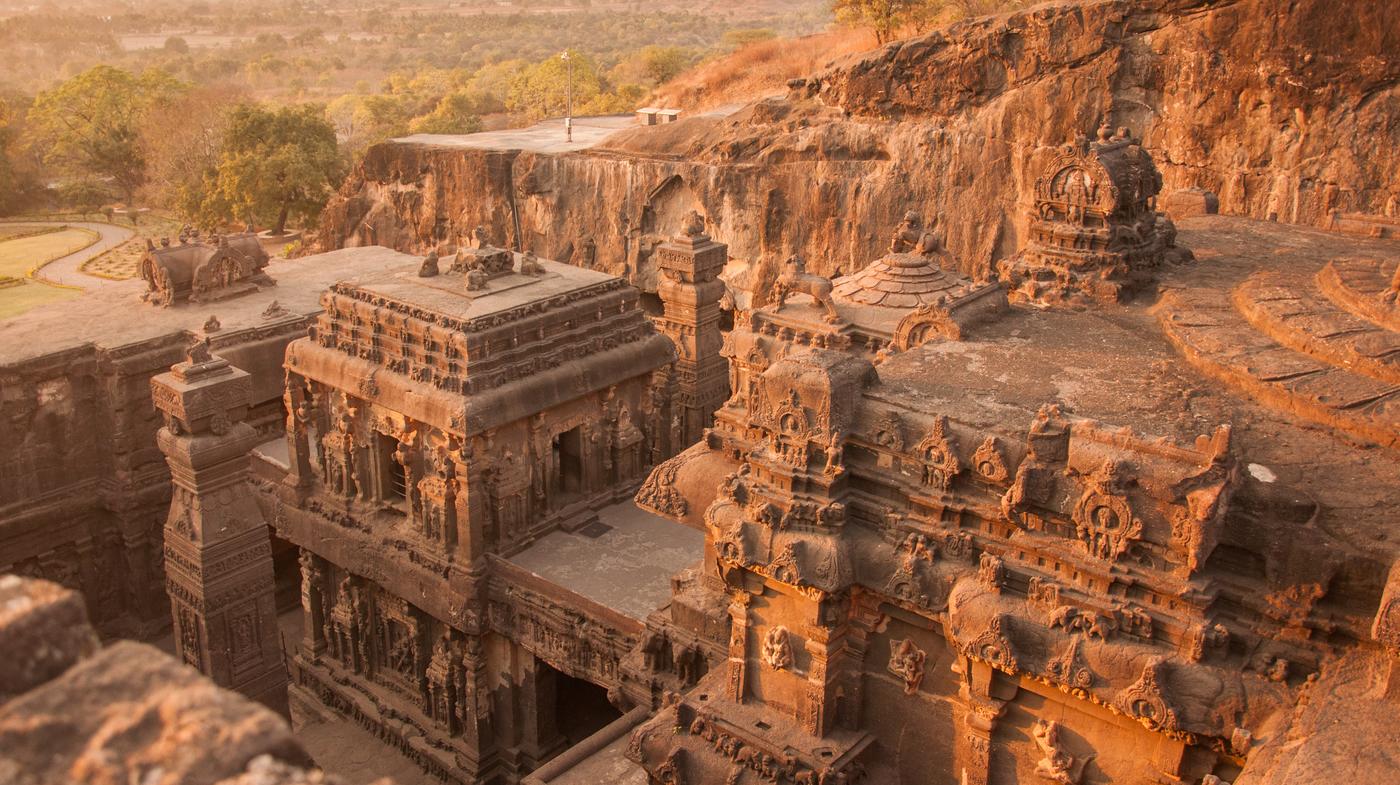 Ajanta Ellora: a photo essay of one of most beautiful places in India

In 2014, I visited the astonishing sites of Ajanta Ellore in India. Though often clubbed together for travel purposes, these are actually two sites and have a distance of around 100 km between them. It is funny, how in retrospect, I completely forgot about this small but major detail and the magnificent beauty of these caves merged in my mind. I remember that it was summer and Aurangabad, the closest city to these sites was scorching hot. The area around these sites was very rural and we had to pass through acres of cotton and fig plantations to reach there. Old fat banyan trees bordered this road and their gnarly aerial roots drooped like curtains. They shaded this road by creating a dim tunnel and it was comfortable, traveling through them. Because of the afternoon heat, there were few other commuters on that road and these were local men going about their business on motorcycles. They were dressed in pristine white with wonderful regional white cloth caps on their heads and these, they had fastened securely with Babushka-style white scarves.

The reality of visiting Ajanta Ellora

Apart from them, huge tourist buses rolled down that road. These were filled with day trippers who were doing Ajanta Ellora caves in one day. The buses carted in people from surrounding Maharashtrian cities and they spoke languages from all over the world. The result was a loud, multilingual crowd at the cave sites with guttural German and Dutch clashing with cacophonic Marathi, harsh Tamil, and sensual French. There was also a hefty sprinkling of Thai, Chinese, Burmese, and other SE Asian languages. It was crowded and their chatter bounced like cricket balls off the stony interiors of the caves. It was a bit unpleasant because these sites are the kinds of places where you quietly contemplate and absorb the beauty. I remember spending entire days at each site just to avoid the crowd and walk around experiencing the magical silence that envelopes these places once the people are fewer.

The magic of the quiet moments

It was at those moments that I truly enjoyed Ajanta Ellora caves; understood their spectacular importance and kind of experienced the wonder of the colonial tiger hunters upon coming across them for the first time. The year 1819 and the month was April, when John Smith, an officer of the 28th Cavalry of the East India Company, spied upon the facade of Cave 10 of Ajanta. It was believed that until then only the local tribespeople knew about this remote spot; the shadowy entrances of the abandoned stone chambers that lay buried deep under a thick blanket of creepers and jungle. The discovery of John Smith, however, changed all that and the astonishing Ajanta and Ellora caves shot into prominence. Immediate in-depth explorations revealed a set of 28 colonnaded caves chiselled out of the chocolate-brown and grey basalt cliffs lining the River Waghora. These caves held beautifully preserved paintings, stunning sculptures, and immaculate paintings within their dark interiors. There were rows of stone Buddhas and other sculptures; a profusion of murals, depicting everything from battlefields to sailing ships, city streets, and teeming animal-filled forests to snow-capped mountains. It was an archaeological treasure trove and even today, Ajanta cave paintings are considered the finest surviving gallery of art from any of the world’s ancient civilizations.

Inside a cave at Ellora. This was during a quiet moment near closing time.

The Ellora caves were different. They were more sedate, less spectacularly located, and served a different purpose than their Ajanta counterparts. Yet, they were Maharashtra’s most visited ancient monument and were famous for their wealth of stunning sculptures. A heritage site, Ellora has 34 Buddhist, Hindu, and Jain caves lining the foot of the 2km-long Chamadiri escarpment as it juts out of the open plains. The site’s most important attraction is the massive Kailash temple, a monolithic complex that has been literally carved out of a basalt hillock. It looks as if someone had started carving the vast lump of solid basalt from the top and worked all the way down, creating a spectacular complex of colonnaded halls, galleries, and shrines in the process. To say that Ellora is magnificent is an understatement and this photo essay is dedicated to the exquisite Ajanta Ellora combo. Only 400km away from Mumbai, Ajanta Ellora caves are one of India’s most beautiful sites.

A stunning fresco at one of the caves in Ajanta

Both the Ajanta Ellora complexes are covered with sculptures and paintings

One of my favourite sculptures at Ajanta Ellora complexes