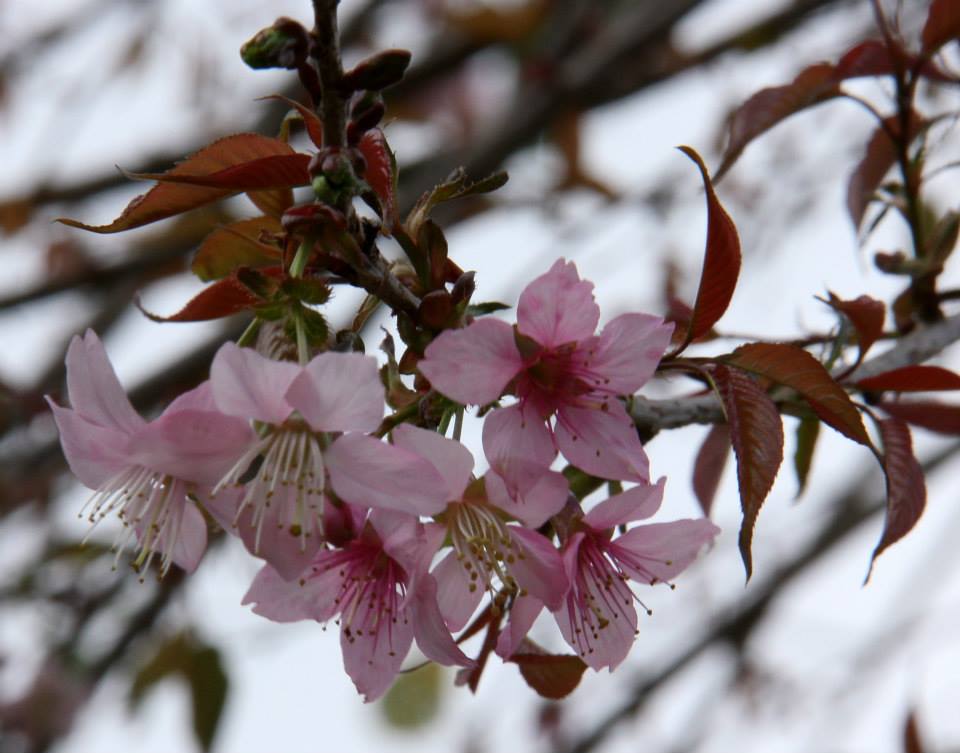 The violet flowers of the blue hills

I had woken early next morning to a lovely hilly scene outside my window. We had been going up the Palani Hills in circles, typical to a mountain road and mists had rolled down from the slopes, like soft, fluffy clouds. Fresh looking wild flowers had sprung forth from grassy niches and on the other side, tree clad hills had stood like friendly sentinels.

A popular honeymoon destination in down south, it had been no wonder that the bus had been filled with coy newly married couples. Kodaikanal had appeared soon in winding phases of hide and seek, as the bus had slowly reached the top. Colourful clapboard cottages, swatches of modern box like hotels and terraced farms had given away its busy town appearance and from our height, the Kodaikanal Lake had looked like a broad stretch of liquid mirror. Still, shimmering and star shaped, dense greenery had ringed its sides and it had lain in the cup like valley like a misty oasis among the mountains.

The last stop had arrived soon and by that time the bus had nearly emptied out. I had gotten out in the cool, crisp morning air and had immediately breathed in lungfuls of ammonia scented air. Sadly for all its prettiness, Kodaikanal, especially near the transport stand, had been quite littered, puddled with urine and reeked of pollution. My guesthouse had been bit of a walk from there and I had not minded the distance from the city center. To me, its lack of close proximity to the center had meant fresh clean mountain air, rare peace and quiet and good hikes. The Pine Borough Inn had delightfully kept up to my expectations and I had fallen in love with it at 1st sight. A series of cottage like rooms, the friendly guest house had cascaded down the slopes in a tumble of colours into neat flower filled gardens, duck pond and a cow pen. Hammocks, toad stool style chairs and lush reading coves had been scattered on the soft, springy grass and flowers had filled its every niche. The friendly owner had welcomed me with a steaming cup of filter coffee and had genuinely been surprised that I had walked all the way to the inn.

It had turned out that sensing my early check in and my solo woman traveler status, he had already sent his driver to pick me up from the bus stand (to stop me from facing any harassment) and the simple gesture had touched me. I had felt immediately at home and had enjoyed my 1st Kodai (as it is commonly called) morning playing with the in house dog Rambo, while relaxing on the open dining area. It had been very pretty and had become lovelier as the sun had slowly risen, melting the mist with its warm fingers. Pine forests had buzzed with excitement as birds and insects had busily prepared for the day and rows of school children, scrubbed clean and sporting crisp uniforms had trudged down the hills squealing merrily. A little church, perched on the opposite slope had tolled sweetly and cherry trees had showered pink petals in sharp gusts of mountain breeze.

The cherry trees had taken me by surprise and I had not expected to find sakura (cherry blossoms) in full bloom splashed all over the Palani Hills. They were the wild Himalayan cherries, tarty in taste and mostly consumed by birds and I had been lucky to have visited Kodai during their flowering time. A popular hill city in the Dindigul district of Tamil Nadu, Kodaikanal is famous for its rich flora, interesting fauna and tribal heritage. Literally meaning, “The Gift of the Forest”, Kodaikanal is a part of the richly bio diverse Western Ghats and home of the endemic shola forests. Sholas are local name for stunted canopy like tropical montane forests and they are photogenically separated from one another by rolling grassy meadows. In fact Kodai had been a lovely mosaic of forests and meadows and it had been as lush as it could get. Pine, eucalyptus, pear, rhododendron, orchids and magnolia, the hills of Kodai had been a fragrant tangle of petals and colours and large dahlias had bloomed like mini suns.

Apart from the fast shrinking shola forests, Kodai’s star attraction are the kurinji flowers and the hill city even had a temple dedicated to it. It must have had been an amazing sight that had met the eyes of the early European settlers when the blooming neelkurinji had turned the meadows into a sea of mauve. Blooming once in every 12 years, its the gregarious flowering of the neelkurinji which had rendered the hills the name, “Nilgiris” or blue mountains and they are found only in high altitude regions of Western Ghats. The indigenous flora of the region had given rise to many interesting fauna too, the most famous being the Nilgiri tahrs (ibex), beautiful lizards, jewel coloured butterflies, birds, martens and an elusive jungle cat called pohayan.

Home of the ancient Palaiyar tribal people, archaeological studies of megalithic dolmens ( ancient portal grave of single-chamber usually consisting of two or more upright stone slabs, supporting a large flat horizontal capstone containing human remains and artefacts), earthen pots etc had revealed that Kodai had been sustaining life from 300 B.C.E. Although modern Kodaikanal had been established by American missionaries in 1845, mentions of Kodaikanal had been found in early Tamil Sangam literature of early Christian era.

In a classic Tamil literary work called “Kuruntokai“, the love poems had been set in the mountainous region of kurinji. It had been the love story of Lord Murugan and his consort, Valli the honey collecting daughter of a mountain dweller of Kurinji hills. The region described had been lush, pristine with forests filled with lakes, waterfalls, teak, bamboo and sandalwood. Millet had grown in abundance and wild bees had filled it with honey. The legacy of the epic Tamil love poem is still maintained at the Kurinji Andavar Temple in Kodaikanal by Arulmighu Dhandayuthapani Swamy Thiru Kovil, Palani and the deity of the temple is Sri Kurinji Eswara, an avatar of Lord Murugan.

Incidentally, it is believed that Kodaikanal had been named after the honey collecting princess of the hills as the Tamil synonym for “kodi” is “Valli” (Lord Murugan’s consort). She had been blessed to the chief of Vedda tribes and his wife when they had prayed to the mountain god for a girl child. Their prayers had got answered when on a hunting expedition, they had stumbled upon a new born girl wrapped in creepers and vines. Owing to her location, she had been named Valli meaning creeper, and she had grown up as a Kurinji princess to become Lord Murugan’s consort.

Bee collection had still remained Kodaikanal’s major home industry and it had only been during my volunteering work at PHCC (Palni Hills Conservation Council) that I had discovered how intrinsically Kodai had still remained rooted to its myths and legends. Life had still moved at its own sweet pace in Kodaikanal and its enchanting beauty had made it the perfect place for love stories and cherry blossoms to bloom. Thus had begun my 1st day at Kodai in a cozy pine log cabin, overlooking the blue green mountains and birds calling out merrily from the thickly flowering cherry trees outside my window. Mists, lake, forests and flowers, it had been no wonder that I had fallen in love with Kodai at 1st sight.

And at times rustic

Kodai had sloped down

In rainbow of colours

I had fallen in love

With its old world charm