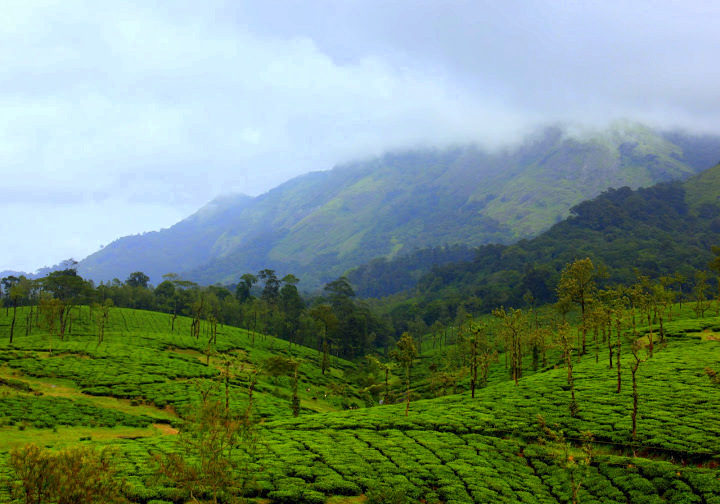 A quaint virgin hill, Nelliyampathy is located in Palghat district of Kerala. It gets its name from Nelli (gooseberry) trees that are found at its foothills and the entire range is abundant with lush green forests filled with wildlife and many important plants. The misty hills are patched with tea gardens, coffee estates, orange plantations, and cardamom gardens scent its air. Wild elephants, giant squirrels, deer, bison, butterflies, and many varieties of birds call the range home and because of its 467 meters above sea level altitude, Nelliyampathy enjoys a misty cool (often rain washed) clime. It is a perfect getaway destination for those looking for a break from Kerala’s typical tropical mugginess and in summers, Nelliyampathy is less crowded than more famous Munnar and Thekkady.

An unforgettable visit to Nelliyampathy

Nelliyampathy Hills were passed from the indigenous community to British planters

Nelliyampathy hills or Nellies originally belonged to  Vengunad Kovilakam of Kollengode, a small principality of Malabar and it was they, who leased the virgin forested tracts to the British. The wild Nellies got domesticated by the planters who started cultivating coffee in the virgin land and earlier only the Malabari indigenous people roamed free there. Eventually, along with coffee, tea gardens started covering the face of the rolling hillocks of Nelliyampathy hills and soon spice gardens and fruit orchards planters also joined the bandwagon. Although, the credit for Nelliyampathy’s plantation history is given to the British, pages from the early planters’ diaries claim that the hills were home to others before their arrival. These early residents cohabited with the wandering tribal communities of the region and according to the early settlers’ journals, coffee was already growing on the slopes before the land was handed to the British. Today, the lovely green land is jointly shared by the Kerala Forest Department and the Poabs India Company. Together, they take care of the heritage plantations and the lush green forests of the hills and it is indeed a beautifully preserved natural site.

Suggested Read: A retreat into Palakkad, the granary of Kerala

A stunning road trip took me to Nelliyampathy

My memories of Nelliyampathy are sadly a bit vague and all I remember now is being beautifully overwhelmed by its lush greenery. I went there on a day trip from Palghat and it was a long, uphill drive. A bad lunch en route made me sick and by the time, the jump-off base town of Nenmara arrived, I was weak from excessive vomiting. The drive, however, was jaw-droppingly beautiful, and twisting ribbons of silvery of the road, red-roofed houses, and tranquil rustic hamlets accompanied me all the way. All possible shades of green seemed to cram themselves in the landscape outside my window and the parrot-hued paddy fields and emerald forests contrasted sharply against the smoky blueness of the Western Ghats. The clouded peaks of the Nelliyampathy hills were visible from Nenmara and from there, it was one nausea-inducing uphill drive. More than 10 hairpin bends weaved in and out of the mist-wreathed hills and I threw up all the way to Pothundy Dam.

Cool, dense green tunnels of rainforest took over the landscape soon and I could get glimpses of the neighbouring state of Tamil Nadu through the wide-jawed Palghat Gap. The weather too turned considerably cooler as we neared the summit and gushing waterfalls sprayed refreshing mist on my passing face. I started feeling better as we neared the top and the hills became more dramatic with each turn. They alternated between being densely tropical, rolling alpine with patches of shola forests to stony, grey, and bare with neon green grassy clumps dangling from their rock face like fluorescent ribs. Flowers too grew abundantly and wild scents filled the air. It was a cool, wet fragrance of green sap, wild things of the forests, and moisture-laden clouds.

The landscape was of endless shades of green

Soon, little tea gardens and orchards appeared in clusters and the lush forests gave way to fruit orchards, organic farms, and flower hothouses. Tea stalls and small shops dotted the road and tea garden workers rested with their wicker baskets of produce. The road got considerably busier at the top and flower sellers holding bunches of butterfly-shaped orchids, baby blue hydrangeas, and ruby anthurium started hawking their wares. Cooler climate vegetables like mountain squash, wild mushrooms, leeks, and strawberries were being sold in heaps and people queued up for the local delicacy of tea chicken. It was a bit crowded at the top and the base village for Maampara was a chaotic traffic mess. Because of little time on my hands, I avoided the much-raved viewpoints and “must-visit spots” and happily drove around the waterfalls and English cottage dotted tea gardens.

Nelliyampathy is a beautiful alternative to Munnar and Wayanad

The slow drive amidst the fragrant plantations was very soothing and it was the perfect way to end my Nelliyampathy day. I left the Nellies soon and a violent thunderstorm chased my car downhill. Blinding rain and hairpin bends are a scary combination and I reached Palghat feeling, exhausted, road-weary and very very sick. Despite the nagging aches and sores, my heart was filled with contentment and my dreams that night were of the blue-green forests, scented plantations, and gorgeous beauty of Nelliyampathy hills.

Road – To reach Nelliyampathy, one has to take the road starting from Nenmara which is the base of the hill on which Nelliampathy sits. The nearest KSRTC bus stand is at Palakkad and the National highway NH7 and NH47 from Bangalore via Hosur, then via the Coimbatore bypass onto Palakkad leads to Nenmara.

Airport – Coimbatore is the nearest airport and it is 101 km from Nelliampathy and 55 km from Palakkad which is connected to all major cities in south India, including Chennai, Bangalore, and Hyderabad.

Train Station – The nearest railhead is at Palakkad and from here one can hire a taxi or jeep to Nelliampathy.

The best time to visit is from September to January and monsoons bring very heavy rainfalls from June to September. Post monsoons and post winters usher in the flowering season in the hills and the waterfalls are their prettiest during the rains.

What to See in Nelliyampathy

From the forested greenery of Palakkad,

To the tea gardens of Nelliyampathy

My Palakkad district trip was one

The drive uphill was trough different shades of green,

And through the historic Palghat Gap.

Tropical and deciduous forests and

All the way to Nelliyampathy.

I drove down with a thunderstorm chasing my car

Back to the watery shades of Palakkad.