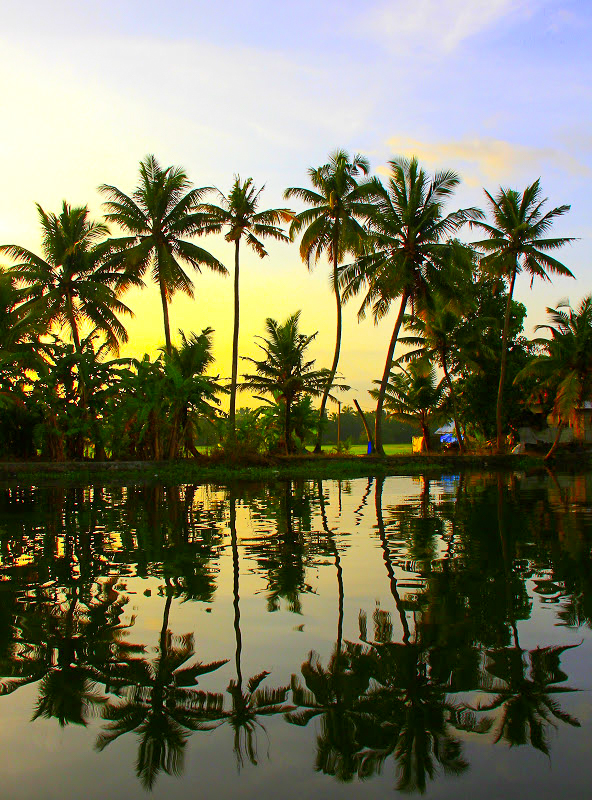 Kollam, memories of toddy shops and a lesser-known side of Kerala

One of my funniest experiences in Kerala is attending Vallam Kali in Kollam. Famously known as the Kerala snake boat race, vallam kali is a much-photographed and popular event. In fact, major Vallam Kali events are the highlights of many travel itineraries, and the Kollam and Allepey districts known to hold the best races. The one I attended was a small event, attended mostly by the locals. They came to cheer, boo, drink, flirt, and in general, be merry. Even though the prize money was insignificant in comparison to the big events, the banks of the rivulet in which the boat race was held were jam-packed. Excited children holding balloons and pinwheels ran along the banks while cheering their village boatmen. Women in rainbow coloured saris and flowers in their hair dipped their feet in the water and slightly inebriated men in mundus loudly clapped at a passing float of a pot-bellied actor dressed as Mahabali.

This was my first experience in Kollam and I absolutely fell in love with the district. Squeezed between the sea and Ashtamudi Lake, Kollam (previously known as Quilon), was for centuries the epicenter of the Malabar’s spice trade. Its port city, which is also known as Kollam, is one of the oldest ports in the Arabian Sea, and in the olden days Romans, Phoenicians, Arab, Chinese, and later Portuguese, Dutch and British traders made the town lively. This was before the rise of Calicut and Cochin ports and the foreign traders flocked to Kollam to hoard the local spices and cashew crops making it an important commercial hub. Today, this old port city is best known among the tourists as the gateway to the southern approach to Kerala’s backwaters and one end of the popular backwater ferry trip to Alleppey. A quiet, tranquil place, Kollam is beautifully fringed with coconut palms, cashew plantations, and traditional villages. The calm waterways of Ashtamudi Lake make it enchanting and though not many travelers stay overnight here, it is a lovely place to explore. The city center is hectic with its daily bazaars and busy traffic heading for the southern backwater region, but a few vestiges of its former prominence can still be seen in its old wooden houses and narrow backstreets lined by coir warehouses, rice stores, and cashew traders.

An unbelievable sight on Kollam street

Kollam in my eyes marks intrepid Kerala and I had some of my best travel experiences there. I first went there in 2014. It was during my flying days. I had two days’ layover in Kochi, where I met a local friend who took me there. We drove out from Kochi in the morning, stopped briefly to meet his friends at a gorgeous heritage house in the countryside before heading off to a toddy shop for lunch. If there is something that tops my huge list of things I love in Kerala, it would be toddy shop food. Locally known as the ‘kallu shaap’, these popular shacks serving both food and alcoholic/nonalcoholic beverages are the Keralite equivalent of countryside taverns. Patronized by day laborers and government employees, local families, and tourists, kallu shaaps are the best places to experience “the true, original taste of Kerala.” These are mostly the domain of the local men. After a day’s work, a kallu shaap is where the local men meet to play cards, stare at an omnipresent tv, or chat. Potbellied clay pots bearing toddy, a sparkling, boozy drink made of the sap of coconut palm trees, sit in front of them as a grungy cook bustles to dish out some of Kerala’s spiciest and most delicious dishes. The hotter the food is the more you need to drink and so toddy shops serve fiery dishes of fish, meat, tapioca, and dry rice dishes laced with chiles and vegetables. These are a foodies’ paradise and I can have one daily meal at a toddy shop without getting bored of it.

A kallu shaap cuisine is completely unique. With spiciness as their highlight, the toddy shop specialties include karimeen pollichathu — spiced freshwater fish that’s wrapped inside plantain leaves, and fried in coconut oil — served with a side of kappa, steamed mashed tapioca. There is also the duck mappas, shredded duck meat slow-cooked in a spiced coconut sauce; kakka or freshwater clams, roasted with spice and coconut shavings; and meen thala curry, made with usually massive fish heads and coconut milk. Pickles of various kinds usually made from tender, tangy baby mangoes are served as accompaniments along with some shaaps providing a salad of sardines tossed with red chiles, turmeric, lime, and freshly grated coconut flesh. Spicy peppery roasted prawns and fiery red fish curries are also served here and you wash them down with slugs of slightly sweet, slightly tart toddy to douse the heat.

The toddy shop in Kollam

The kallu shaap I went to for the first time in Kollam was very very intrepid. Made up of corrugated tin sheets, it had only 3 rooms with its chef and owner cooking in the garden under the coconut trees. Only a small tv stood near the cash counter and the walls were plastered with posters telling the patrons not to bring harmoniums with them. As I later found out, toddy turns alcoholic as the day progresses and by evening, it becomes a potent drink. The tired men after eating platters of spicy food drink umpteen pots of toddy and they tend to get boisterous, often playing on their harmoniums and singing aloud in drunken chorus. The owner of that toddy shop complained that his license got revoked due to such disruptive behaviour and after that, he is especially careful to not let musical instruments enter his premises. The seriousness on the man’s face as he said this was hilarious and he was a good host too. Our table was never empty of delicious dishes and our toddy pots were always refilled. Though many non Keralites do not like toddy due to its smell, I simply love its boozy kick. The aftertaste of fermented coconuts and their nutty smell tantalize me, and it is one of my favourite drinks in the world.

The lush countryside of Kollam

The rustic life in Kollam

I love everything coconut. West Bengal, where I hail from is a state lush and green with swaying coconuts and we are brought up relishing delicious coconut-based goodies. Kerala is another coconut loving state. Coconut palms grow wild here; along highways, alongside airport runways, bending over gracefully to create dim green tunnels over canals. There is at least one in every family yard, and in Kerala, every single part of the tree is used. I saw in Kollam, where sometimes the sky seems green from the coconut palm fronds, how the locals use the bark as firewood while turning the leaves and husks into mats and rope. The coconut meat here is commercially grated to be used in the food and the leftover shells are turned into spoons and cooking utensils. The sweet sap is either used to make palm sugar or left to ferment so that it can be transformed into a special, mildly alcoholic brew called toddy.

It was in Kollam that I actually saw toddy tapping. I stayed at a friend’s heritage house for a night and in the morning, saw a thin, wiry man climb up the skinny trunks of the coconut trees like a deft monkey. The house stood in the middle of a vast coconut plantation and every morning, tappers came to tap toddy from the trees. They bought the sweet sap by liters, each paying for their harvest, and the next morning it was repeated. Toddy sells for a bottle for around ₹90-110 (about £1.20/$1.40) a liter and it supports numerous livelihoods of tappers, farmers leasing out their palms, and kallu shaap owners. Thus, the sight of toddy collectors every morning and every evening, scaling the trees to tap the flowers, under which clay pots are attached to catch the sap is quintessentially coastal Kerala. It is an ancient cultural practice, one which goes back to hundreds of years, and every day, nearly 30,000 toddy tappers across the state clamber up coconut trees. To make their ritual faster, they often walk from treetop to treetop on crude tightropes in search of budding flower stalks. They slice these stalks open and use terracotta pots to catch the milky liquid that oozes out. These palm tappers then cart off the resulting milky liquid to the shops where they are left to lightly ferment to gain potency. Toddy is thus born and this delicious milky natural alcohol must be drunk within 24 hours before the sourness can become unbearable.

When you mix together food, tranquil local life, lush nature, and a laidback lifestyle, you get paradise. Kollam in Kerala seemed to me like that; the perfect destination to relax and unwind, at least in my eyes. With its tranquil waterways minus with the crowds of Alleppey, lush paddy fields, quaint hamlets, rustic life, strings of waddling ducks, swaying coconuts palms, and traditional wooden houses, Kollam is the intrepid face of Kerala.

Kollam is an hour and a half away from the capital city of Thiruvananthapuram. It is connected with most of the parts of the country and Kerala with all three means of transport. A ferry boat station in Kollam connects it to major port cities of India.

Places of Interest in Kollam