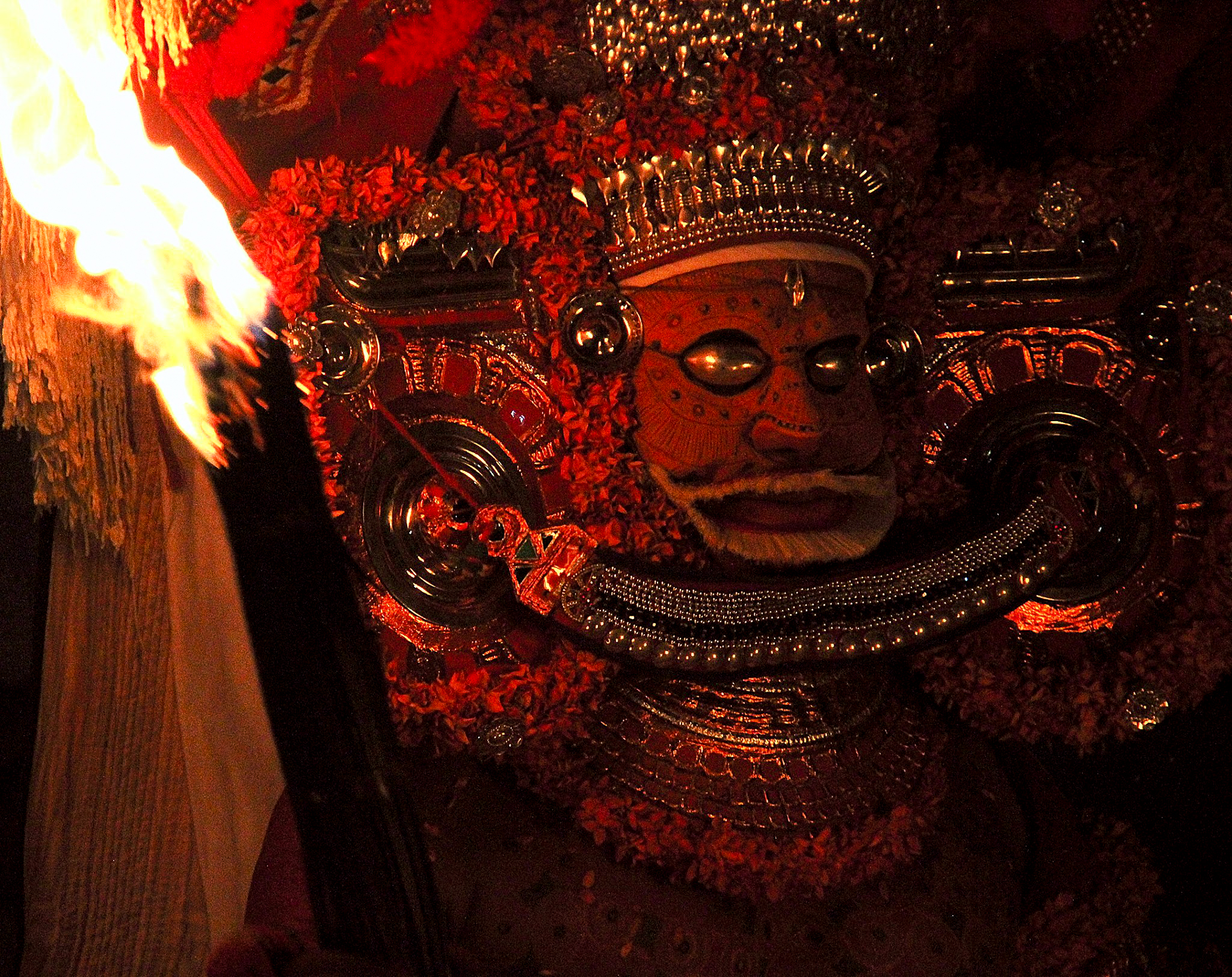 Theyyam, when gods come down to earth

A Theyyam performance, in my eyes, is a larger-than-life experience. Imagine being in an obscure village in Kerala in the middle of the night; shadows engulfing traces of the surrounding human habitat and the rustling of coconut palms creating a hushing muffled sound. Temple priests swishing lighted palm frond torches scattering red embers in the air. There is an omnipresent drum beat. It reminds you of primal ceremonies when human beings were still discovering the difference between the physical and the metaphysical; spirits, souls, and deities reigned the imagination. The main performer of the ritual stands at the center of a mesmerized audience. He stomps around mightily to the drum beats, his bells and bangles clattering in unison. Temple priests hover around to steady or restrain him when all of a sudden, the tempo increases. The theyyam performer starts spinning and the torchlight bouncing off his brilliant costume creates a blinding spectacle. He shimmers, shines, and despite the weight of his elaborate costume, move at an unbelievable speed. His painted orange face takes on an inhuman glow, his eyes glimmer, and the delicate red designs spidering across his face twitch until they are almost invisible. The drumming gets frenzied as the night deepens and onlookers watch with bated breath as the main performer gets possessed by the deity he was placating. All of a sudden, there’s a fever pitch; the performer now possessed by a god, starts walking on burning embers, sparks fly in the smoky air, and loud cries resonate in the night. The entire effect creates goosebumps, is distinctly supernatural, and that is precisely the point.

This is Theyyam, an ancient ritual art form that hails from a time when animism was the form of worship. Till today, trees, plants, and animals are worshipped alongside Hindu gods in theyyam rituals and the performers bring to life, stories of divine beings and heavenly spirits. Often mentioned as the Dance of the Gods, this dance is one of the oldest indigenous art forms of North Kerala. Its roots are believed to predate Hinduism and can be traced back more than 1500 years. An extraordinary spectacle, more than 400 different manifestations of theyyam exist in and around Kannur. Each of them comes with its own distinctive costumes, elaborate jewellery, body paints, face make-up, and gigantic headdresses (mudi). The most important ones are Raktha Chamundi, Kari Chamundi, Muchilottu Bhagavathi, Wayanadu Kulaven, Gulikan, and Pottan. Besides its intriguing, primal history, theyyam is also famous for its fantastic costumes. There are 450 different theyyam costumes, each made up of face paint, bracelets, breastplates, skirts, garlands, and intricately crafted headdresses that are 6m or 7m tall. From an artistic point of view, theyyam encompasses dance, mime, and music. The spectacular ceremonial dance is accompanied by the pulsating music of instruments such as Chenda, Elathalam, Kurumkuzal, and Veekkuchenda.

Theyyam ritual has a supernatural effect.

What happens during a theyyam ritual?

In theyyam, actors impersonate goddesses or gods and they actually become the deity being invoked, thus acquiring their magical powers. This trance-like state allows them to perform superhuman feats, such as rolling in hot ashes or dancing with a crown that rises to the height of a coconut tree. It is locally believed that by experiencing theyyam, the audience absorbs the deity’s powers – to cure illness, conceive a child or get lucky in a business venture.

Where and When are theyyams held?

Theyyam rituals are traditionally staged in small clearings (kaavus) attached to village shrines. These are always performed by members of the lowest castes with the higher caste members in attendance. They do so to venerate the deity – a unique inversion of the normal social hierarchy. Theyyam takes place between November to May all over the north of Kerala (and parts of neighbouring Karnataka). The peak season is between November and December when there are multiple performances a day in kavus/temples all over the region. Kerala Tourism website publishes a Theyyam calendar every year. However, as the dates and locations of these events often change at the last minute, it’s advisable to speak with your hotel/guest house to confirm. I experienced theyyam with the help of my homestay owner.

Details of a theyyam performance

Theyyam is generally performed in three distinct phases: the thottam, where the dancer, wearing a small red headdress, recites a simple devotional song accompanied by the temple musicians. It is followed by the vellattam, in which he runs through a series of more complicated rituals with slower, and more elegant poses. Mukhathezhuttu is the main event. During this phase, he appears in full costume in front of the shrine. From this point on until the end of the performance, which may last all night, the performer dances around the arena in graceful, rhythmic steps that grow quicker and more energetic as the night progresses. At some point, in a trance-like state, he loses his physical identity and speaks, moves, and blesses the devotees as if he were that deity. The main event culminates in a frenzied outburst just before dawn, when often the dancer is seen to be struck by a kind of spasm.

A theyyam performer getting ready

Meet the god men of theyyam

When not performing, the god men of theyyam become mere mortals. Interestingly, they are male members of lower Hindu castes and treated with deep respect throughout the ritual. Theyyam holds such high religious importance, that during the performance, even the higher caste members pay reverence to the performers in order to please the deity. Such social hierarchal reversal is very uncommon among the religious-minded population of India. Theyyam often runs in the family. For most performers, it is a tradition that is handed down through generations, and the dancers start preparing for their divine roles in their early teens. They spend years of rigorous practice learning the skills required for every part of the tradition. Their lessons range from making costumes from coconut husks to the delicate art of face painting. Upon becoming a theyyam performer, the dancer follows a strict routine. In the weeks leading up to a ritual, he practices a life of purity. Consumption of meat and alcohol is prohibited during this time and the dancer should neither lie nor speak badly of others. He has to pray at the temple daily and cleanse himself before the dance. On the day of the ritual, he begins the event by singing and chanting stories in minimal costume. His transformation into a god is gradual and only once, he is painted and dressed in his most elaborate attire, can he fully channel the deity.

A kaavu where theyyam is performed

Theyyam rituals are held from November to April with the peak season being December.

There are theyyam performances in many temples in Kannur and Kasaragod. Karivalloor, Nileswaram, Kurumathoor, Cherukunnu, Ezhom, and Kunnathoorpadi in North Malabar are places where theyyams have performed annually (Kaliyattam) and draw huge crowds. The town of Bekal is also a good hub to see theyyam in Kerala.

Cost of witnessing a theyyam ritual

Seeing Theyyam in Kerala can be cheap. Most travelers who do not have local friends either contact their homestay owners or a local travel agency. The only cost involved is for the transportation to and from the event. However, since theyyam is usually a whole night affair, transportation costs around 2500 Rs. Most pick-ups for theyyam happen around 9 pm and the drop-offs are at 1200 in the afternoon the next day. One may leave earlier if they wish.

Things to Remember before witnessing a theyyam ritual