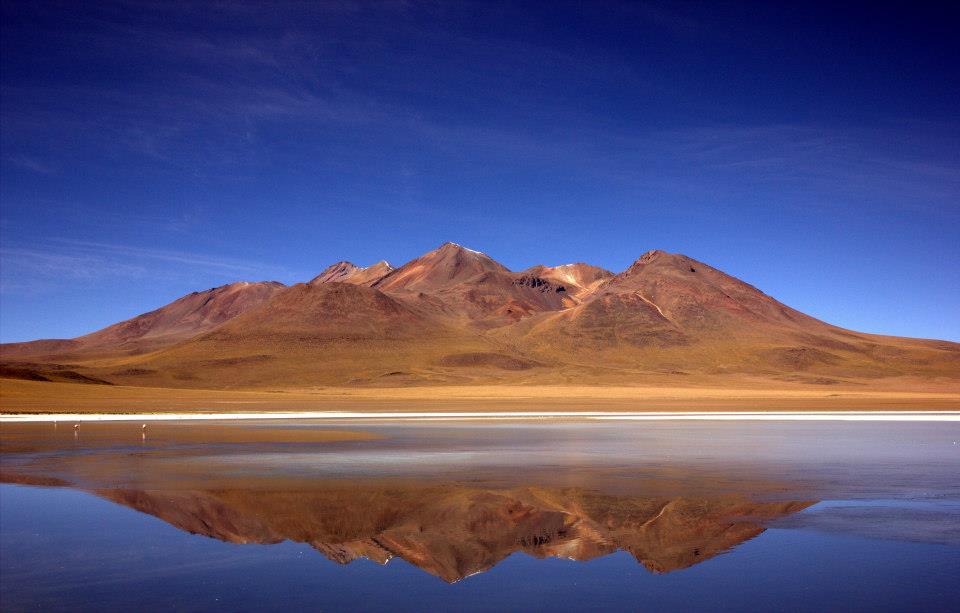 It took 10 hours and a very enjoyable drive to reach Uyuni from Sucre. The bus was comfortable with only a handful of passengers and the road was smoothly paved all the way. The landscape ranged from verdant mountains and rolling meadows where goats skipped and children waved to stark stony hills. Sparkling streams gurgled by clumps of flowering giant cactus and hordes of inquisitive llamas stared at us. Bent old Indian women waved, stopped our bus in the middle of the mighty cordilleras and sold us fat bags of coca leaves.

Sometime around noon, we paused for lunch and it felt good to be in that wild remoteness. The meal was homespun, sold from the kitchen by an Indian housewife whose husband sold fuel and checked our bus. All the passengers trooped out and relaxed on the sunny open courtyard, while our lunch got prepared. Quinoa soup, some kind of meat and rice made up the simple fare and it was served by the smiling big boned Indian hostess. She was very rustic, happily clueless about my country or most of the world for that matter and chose to stare at me as I ate. We finished the languid sunny lunch, paid an unbelievably paltry sum of 3 Bolivianos (26 INR/ few cents) and resumed our drive.

With lunch sitting heavy on our stomachs and a delicious sun warming our faces, slowly all the passengers dozed off. I too got tired of watching from the window and crept in and out of a cozy snooze. We stopped again soon for another break to attend nature’s calls and stretch our legs. It was a very long drive and the breaks were a welcome relief. This time we stopped near a huge herd of llamas, next to flowering cactus clumps for privacy. They provided perfect cover except for the inquisitive llamas who stared at us from too close quarters. We walked up and down the broad highway, took endless photos and it was as desolate as the moon. Not a single vehicle passed us and apart from the llamas, only the cloudless blue sky seemed familiar. Snow lay sprinkled in fresh crunchy patches and in the distance shallow river beds sparkled like diamonds. Soon crowning of tiled roofs ushered the beautiful mining town of Potosi and the air grew uncomfortably thin.

TRAVEL TIP – Located in the department of Potosi, at 4090 meters the legendary mining town is one of the highest cities in the world. It was also the Spanish colonial mint and the Cerro de Potosi, at whose foothills, this town is based was often referred as the “rich/silver” mountain. Historically a part of the great Inca empire, Potosi brought fabulous wealth to the Spaniards and immense pain to the native miners. The wealthy history of Potosí is reflected in its narrow streets, colonial mansions and the many beautiful churches making it a UNESCO World Heritage Site. It is also a great place to unwind, photograph and experience the harsh life of the miners through one of the co-operative mine tours. There are also a few hot springs and trekking options available around Potosi.

Breathing became very strained around Potosi and drowsiness set in like a dangerous predator. I nodded off every now and then, only to wake up with a start and deep gasps for breath. It was my poor heart which stopped beating every few seconds trying to acclimatize with the low oxygen level of that altitude. I remembered all the locals’ warnings about the dangerous effects of sleeping during high altitude travel and tried to stay awake, but it was hard not to nod off. I tried concentrating on the upcoming Salar trip instead to stay awake and found it effective. I was extremely excited about my 3 days trip to Uyuni with Oasis Tours and although overpriced it was one of biggest dreams coming true.

TRAVEL TIP – Out of excitement I had bought the tour at Sucre for 800 Bolivianos and it included stay at a salt hotel, transportation, food and trips to Salt Flats, Inkawasi, San Juan, Lake Colorada, Lake Verde and  the hot springs near Chile border. However later I found out that the same was available at Uyuni for 500-600 Bolivianos.

Uyuni arrived like an ugly mirage and remained like a bad dream. It was a dusty dirty town strewn with litter and where due to its remoteness everything cost twice than normal. Weather wise, Uyuni was an unpleasant place too as the days were hot and brilliantly sunny and nights were always freezing cold. I stayed at the bed factory called the Hostal Avenida near the train station and it was cold, musty and expensive. The hot shower did not work and neither did most of lights in the room. Since it was cold, I gladly gave the shower amiss and hoped for better bathroom facilities at the salt hotel included in the tour.

The limited options of accommodations in Uyuni made the available ones either bad or overpriced and most of the times both. On the other hand there were lots of restaurants near the main square (locally called the gringo plaza) offering all kinds of global cuisine including Italian, Bolivian, Japanese, Continental and even Indian. While all the hotels in Uyuni lacked everything nice, the Gringo Plaza made up for it. It had a nice global vibe, free wifi and in the evenings became a great meeting place for travelers.

TRAVEL TIP – Uyuni has flight connectivity from La Paz. These flights are operated by both TAM and Amazonas and are quite expensive. There are plenty of buses which run to and from from La Paz via Oruro, Tupiza and Sucre. Two trains – expreso del Sur (better class) trains leave from Oruro on Tuesdays and Fridays to Uyuni and there is a choice between executive and 2nd class. In Uyuni tickets can be and preferably should be bought in advance, since this is the most comfortable and viable option and quickly gets sold out. The other Train Wara Wara leaves Oruro on Sundays and Wed at 7pm and arrive in Uyuni at 2:30 am. This train is unfortunately very much avoidable.

Altitude sickness is the major threat which a traveler faces in Uyuni and this should not be taken lightly. Coca tea, coca leaves and soroche pills do help and it is important to get acclimatized before venturing out into the desert.

Uyuni is extremely walkable and one day before and half a day after Salt Flat tour are all that most travelers like to spend there. Apart from a tiny menagerie of assorted animals and a colourful local market, there is nothing much to do there. Hotels are available in both Uyuni and farther away near Colchan. Although the Colchan salt block hotels are nicer, transportation to and from Uyuni is not easy to get and the only available/dependable hotel transfers are very expensive.

Uyuni is the only place to load up on snacks, batteries, last minute woolen shopping and memory cards before heading into the desert, but expect atrociously high rates. Uyuni has recently got an ATM machine which runs out of money fast and quite a few tediously slow internet cafes. If possible it is advisable to load up on cash, extra memory cards, camera batteries etc before coming to Uyuni.

Because of its temperature fluctuations between days and nights and harsh sunshine, sunscreen, sun glasses and woolens are mandatory while visiting Uyuni. It is possible to cross over to Chile instead of returning to Uyuni and transportation is available for San Pedro Atacama. Exit fee needs to be paid at the Bolivian border in cash and Chile immigration is tediously long.

In spite of the horrible town, I looked forward to the trip to Salar de Uyuni the next day. I desperately wanted to experience its much photographed and legendary beauty firsthand and get out of the hell hole too. It was my first evening in the dark dank matrimonial (double) room in the horrid Hostal Avenida and while I could easily travel across the globe for Uyuni, I could not have lasted another night in that hell hole for anything in the world.

And its colonial charm soon

Towards one of world’s most photographed places

It was a long drive through the cordilleras or Bolivian highlands

Those coca sellers came out of nowhere

Materializing out of stark landscape

As the high altitude