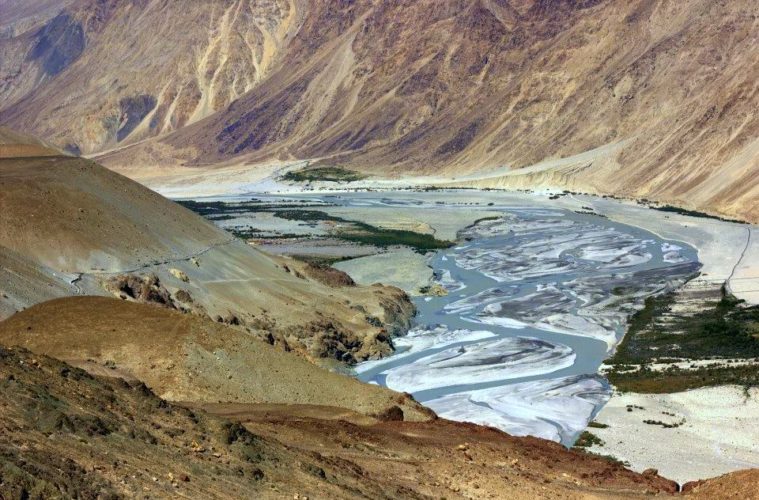 The white desert of Nubra Valley

Nubra Valley is situated in a remote northeast corner of Ladakh. It is a spectacular place, famous for a pristine white desert. A growing hub of organic farms and wellness getaways, Nubra shot into the tourist circuit because of the local double-humped Bactrian camels. Being a high altitude desert, its stunning white sand stretches are popular among trekkers and culture lovers explore the nearby villages of local indigenous communities. It is also a gateway to the last frontier village of Turtuk and the supposedly “Aryan” Dard people live nearby.

I overheard all this and more at the Gizmo Bakery in Leh. An awe-struck English couple who had just returned from Nubra Valley described it in details and their vivid trip piqued my interest. That evening, I signed up for a small group tour and we left Leh the next morning. The route to Nubra Valley was not a bed of roses and it turned to be tougher than the one which took me to Pangong Tso. Until 1994, the region lying north of Leh were off-limits to tourists and were cut off from the outsiders since the 19th century. Before that, Nubra Valley was an active old Silk Route pit stop and merchants and their caravans used to traverse through this area. It was midway between the route from South to Central Asia and traders from Ladakh and Kashmir went through Nubra Valley to travel to Central Asian places like Baltistan and Yarkand.

Those were days of extreme hardship through a stark inhospitable terrain and temperatures drop to -40 degrees Celsius during winters. Nowadays, however, the breathtaking Nubra Valley can be easily accessed via the world’s highest mountain pass and a picturesque terrain unfolds beyond one of the world’s highest stretches of driveable motorway. One has to cross the Khardung La pass (5359 m) to go to this lovely valley and it is exactly where I fell sick. Altitude sickness hit me hard on that drive and the route to Nubra was precipitous. It felt horribly high with the snow clads peaks closing in and being early morning, the valleys were shrouded in mists. After the brief stop (made shorter by my altitude sickness) at Khardung La for instant Maggi ramen noodles and Kashmiri tea, we drove towards the enigmatic Nubra Valley.

The descent into Nubra Valley seems like time travel

The descent into the valley was sudden and we passed through numerous picturesque villages, army posts, and solitary gompas. The road became wider and smoother, the sun shone brightly and old ladies in traditional Ladakhi clothes carried bundles of firewood. Rosy-cheeked children waved merrily and jet black furry donkeys trooped by. Huge Himalayan crows with bright yellow beaks circled noisily and I felt transported to some lost world. Locked between the Ladakh and the craggy Karakoram ranges, Nubra Valley has some of the most breathtaking scenery in the region.

The timeless land of gompas and relics

A patchwork high-altitude desert of sand dunes, rivers, and mountains

The photogenic confluence of the Nubra and Shyok rivers, allows crops to grow in the watered soil of the valley and being at slightly lower altitude than Leh, ample sunshine during summer allows two yearly harvests. This results in a checkered landscape of lush greenery surrounded by the stark cold desert, that is quintessentially most of Ladakh. The fertile patches in the deep-cut Shayok and Nubra River Valleys make it look like a sort of oasis in the middle of a stark white desert and the contrast with the surrounding steep scree slopes, boulder fields, and harsh arid mountains is absolutely mesmerizing.

The beauty of the natural elements of water, earth, and sky

En route to Hunder, our destination in Nubra Valley, we crossed numerous spectacularly picturesque meadows until the road went uphill again. It was not very high and the beautiful vista of Nubra valley unfolded below. The landscape was arid, pebbly and sandy with occasional patches of greenery from shrubs, trees, and cultivated fields. The Shyok River traveled along in a network of channels and the soft glistening white sand dunes appeared. They came in small bits first between Shyok River channels until the scenery became a fine tapestry of rolling sand dunes surrounded by huge stark mountains.

The white sand dunes of Hunder

The Nubra sky was cloudless and impossibly blue but for the first time in my Ladakh trip, the wide expanse seemed dwarfed by the beauty of the mountain-ringed white desert. It was only in Nubra Valley, that the sky seemed to have got trapped within the mountains and the effect of the barren heights, white sand dunes, and the blue sky was simply dramatic. At Hunder, we checked into the excellent Nubra Organic Retreat. Set amidst verdant vegetable garden and fruit orchards, it was a serene and peaceful place. Mountains peaks surrounded the retreat and the only audible noise was of a small tinkling stream which passed through the property. I checked into my spacious tent, luxuriated in a nice hot bath, and spent a wonderful afternoon relaxing in the sun.

At Nubra Valley, you cut off from the pressures of the modern world

The late autumn flowers were busy with bees and ripe fruits sprinkled the cold air with sweetness. Lunch was a simple organic vegetarian spread served under sun washed flowering vines and everything on our plates were sourced from the garden. Nubra Valley being delightfully cut off from the rest of the world even in terms of telecommunication, it felt nice to once again reconnect with nature. There were no calls to attend, no social network notification to check and I could feel myself unwinding without any pressures of the modern world.

The Bactrian Camels and the disappointing safari

In the evening I went over to the famed sand dunes of Nubra Valley with the rest of the traveling group and came back with mixed feelings. The white desert with sand dunes lies around Diskit and Hunder and is inhabited with packs of domesticated double-humped Bactrian camels. These camels are famous for their tolerance to cold, drought, and high altitudes. Thus, they were much in demand with the Silk Route traders. Since Nubra Valley lies in the Old Silk Route, the contemporary local Bactrian camels are believed to be the descendants of the ones left behind by the traders.

The stark signs of irresponsible traveling in Nubra Valley

I did not enjoy the bumpy Bactrian camel safari and found the cold desert to be terribly littered. Trash lay scattered all over the powdery soft sand dunes and fluttered in the wind when caught in the thorny tangle of seabuckthorn bushes. I walked back to the retreat and sat in the garden until a huge white moon rose in the sky. The moonlight illuminated the valley in a bright whiteness and we enjoyed dinner by a roaring bonfire. It got cold at night and as I snuggled underneath my warm blankets taking lungfuls of wild rose fragrance, I wished I had more than one night to unwind at the enchanting Nubra Valley.

All non-locals need an Inner Line Permit (available at DC office in Leh) to visit Nubra Valley and onward. Presently this is a military area and both Pakistan and China borders touch this region. Although pretty pleasant during summers and early autumns, temperatures drop below -40 degrees Celsius in winters. Even in summers, light woolens and jackets are required in the evenings. There are plenty of excellent camps and homestay facilities available at Nubra Valley. Since it is a popular destination, prior booking is advisable in summer.

The Pashmina and a lost Greek tribe of Baigdandu

The Balti region below Hunder village has been open to foreign tourists in 2010 and is still relatively untouched by commercial tourism. The beautiful village of Baigdandu lies in this area. According to local myths, the residents of this village are believed to be descendants of a Greek tribe who came in search of Jesus Christ’s tomb in Ladakh and eventually settled here. Baigdandu is also known for the Changthangi goats from which Pashmina shawl wool is sourced.

Turtuk and Shaksey are the ultimate northern villages of India

Turtuk is on the edge of Shyok River valley and is the penultimate village open to tourists before Pakistan. It is also possible to visit Shaksey village, a few kilometers further away but it is highly recommended to check the ongoing political scenario before venturing to those areas. Day trips to these villages are possible from Nubra Valley and a few homestays and guesthouse options are available for those wishing to stay overnight.

How to reach Nubra Valley

Due to remoteness and difficult terrain, using public transport to Nubra Valley is a bit unrealistic and it is best to go there either with your own vehicle or a part of a group. Jeeps and motorcycles for Nubra and other parts of Ladakh can be rented at Leh and there are always small group departures leaving from various Leh based tour agencies. Joining one such group saves money and the adventure of navigating the harsh terrain on your own. These tours can be modified either as an all-inclusive package or simply for drop and pick up facilities.

After many pleasant Leh evenings,

I was on the road once again,

Headed towards the white desert of Nubra Valley.

We drove through a timeless land,

Retracing the steps of

To go deeper into this remote valley.

It was a magical land

Landlocked in a claustrophobic way,

Nubra Valley is one of

Most beautiful places I have ever been.

I am in love with Nubra Valley for life.