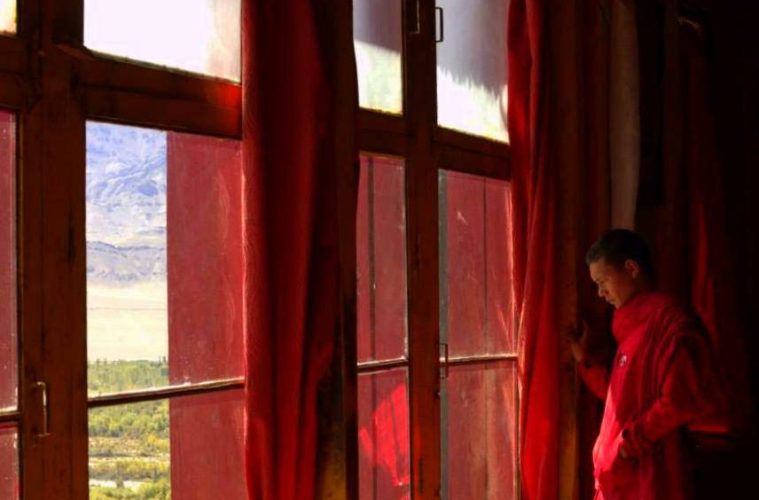 Mountains and Monasteries and Mountains

Leh was again a welcome break but before I fell into my lazy routine, I pushed myself to do a bit of monastery hopping. Ladakh, being a predominantly Tibetan Buddhist Himalayan region, has some spectacularly beautiful and fascinating monasteries. Many of these monasteries were established after the 1959 decision of Indian government to allow Tibetan Buddhist exiles to settle in India. I, unfortunately, made a bad decision of giving Lamayuru monastery amiss, while driving down towards Leh from Srinagar and so did not want to miss out on the others. While some of the Ladakh monasteries are very beautiful and intriguing in their own right, the masked dances or annual festivals have popular travel itineraries based around them. Needless to say, these are much-awaited events and are absolutely fascinating to watch.

Of all the Ladakh Monasteries, Lamayuru is the most mystical

Lamayuru or Yuru Gompa (monastery in Tibetan) is in Kargil district of Jammu and Kashmir and it lies at a height of 3510 m. It is one of the oldest and most mysterious gompas in Ladakh, with a population of around 150 permanent resident monks. Situated about 110 kilometers from Leh, on a big rock overlooking the Indus River, this monastery was founded in the 10th century. According to the legends, Lamayuru used to be a lake and after being blessed by a Lama, its water receded up to the mountains leaving space for the monastery to be built. It is believed that one of the great Tibetan teachers, Naropa, meditated there for several years.

With the Moonland as a backdrop, Lamayuru is also the most beautiful of Ladakh monasteries

The monastery complex, thought to be the oldest in the region, was founded in the 11th century and was partly destroyed in the 19th century. Some of the murals, however, which are a combination of Indian and Tibetan styles have been preserved and the main hall of the monastery houses numerous impressive Thangkas (paintings) which makes it absolutely worth a visit. Lamayuru hosts two annual masked dance festivals when all the monks from the surrounding gompas gather together to pray. Having the eerily beautiful Moonland as its backdrop Lamayuru is one of the most hauntingly beautiful Ladakh monasteries.

I visited Diskit monastery on my way back from Nubra Valley and made a quick photo stop near the beautiful big Buddha. The 32 meters statue of Maitreya Buddha near Diskit Monastery faces the Shyok River towards Pakistan. Maitreya means friendship and I felt the huge serene Buddha, with an enigmatic halo of natural light trying to pass a message on harmony. Sure enough, this statue which was consecrated by H.H. the Dalai Lama in 2010, was built mainly for 3 reasons- protection of Diskit Village, prevention of further war with Pakistan and to promote world peace. Apart from propagating this wonderful message this monastery administration also runs a school known as the “Tibet Support Group”, which has computer facilities and teaches science subjects, in English, to Tibetan children of the region. A popular festival known as Dosmoche or the “Festival of the Scapegoat” is held in the precincts of the monastery in February. It is attended largely by people from villages of Nubra Valley since in winter, Leh and other Ladakh monasteries remain inaccessible to them.

Hemis hosts the most beautiful festival among all the Ladakh monasteries

The very famous Hemis monastery was unfortunately partially closed at the time of my visit, but I fell in love with its beautiful surroundings and friendly little novice monks. Situated around 45 kilometers south of Leh, on the western bank of Indus River, the Hemis monastery is the biggest and perhaps most richly endowed of all the Ladakh monasteries. Surrounded by beautiful green mountains, cultivated fields, and tiny hamlets, it is most famous for its annual festival which enlivens its courtyard. Held for two days in June-July, its incredible festival of dances is a dazzling display of grotesque masks, raucous music, and celebration of the triumph of good over evil. Apart from the colourful pageant, Hemis Monastery hosts the annual ‘bazaar’ where Ladakhis from remote areas come to buy and sell their wares. Built in 1630, Hemis Monastery has an important library of Tibetan styles books and a very impressive and valuable collection of Thangkas, gold statues, and Stupas embedded with precious stones. It also has a little garden restaurant at its foothill, which serves delicious momos and is a very popular haunt of cheeky young monks.

You may also like: Fifty shades of Pangong Tso blue

But I could have stayed at Thiksey Monastery forever

My favourite among the Ladakh monasteries was the Thiksey monastery and I spent an entire morning there. Situated 19 kilometers away from Leh, it is a large monastery situated atop a hill. Its buildings are arranged in an ascending order of importance starting from the foot of the hill to the top, with the potang (official residence) of the chief lama at its peak. The architecture of the monastery strongly resembles the Potala Palace in Lhasa, Tibet. Thus, Thiksey Monastery is often referred to as the ‘Mini Potala’. Apart from its two-storeys tall Maitreya Buddha, it has a beautiful assembly hall, exquisite wall murals, a host of guardian deities, another lovely Buddha in its inner sanctum, the throne of Dalai Lama, and head Lama, a temple of Tara Devi (Goddess) and a nunnery for female religious practitioners. It also has host f modern facilities like medical clinic, hotel & restaurant, souvenir shops, and school. Thiksey Monastery holds an annual function but its main spiritual draw is its morning prayer.

The morning prayers at Thiksey Monastery are held every day from 7 am and it is truly a soul touching experience. Synchronized chanting of the Buddhist sutras echoing through the snow-clad peaks and empty pre-dawn valley are both powerful and life-changing. Make sure to coordinate with the lamas at Thiksey or get information from their office about this prayer schedule. The previous day entry ticket is acceptable for attending the morning prayers so make sure to retain it.

My last evening in Leh was spent exploring Ladakh monasteries

My time flew at Thiksey Monastery by simply basking in its sublime peace. Quiet, serene, and enchanting, it was my own slice of heaven. I sat near its inner sanctum listening to my own breathing and watching the colourful peace flags flutter in the crisp Himalayan air. Without even trying, a deep meditative peace came over me with and only the deities from old wall murals and a silent monk gave me company. A cotton wool silence prevailed except for the prayer wheels which swirled diligently. Even the omnipresent noisy Himalayan jackdaws were silent. Brightly coloured flowers grew all along the hill slope tumbling into the stark valley and Ladakhi materialistic life seemed small from my spiritual heights. I sat there till the shadows turned purple and shy rosy-cheeked Ladakhi school children skipped back home. It was my last evening in Leh, and so I decided to spend it in the heart of one of the most spiritual Ladakh monasteries. My trip could not have ended better.