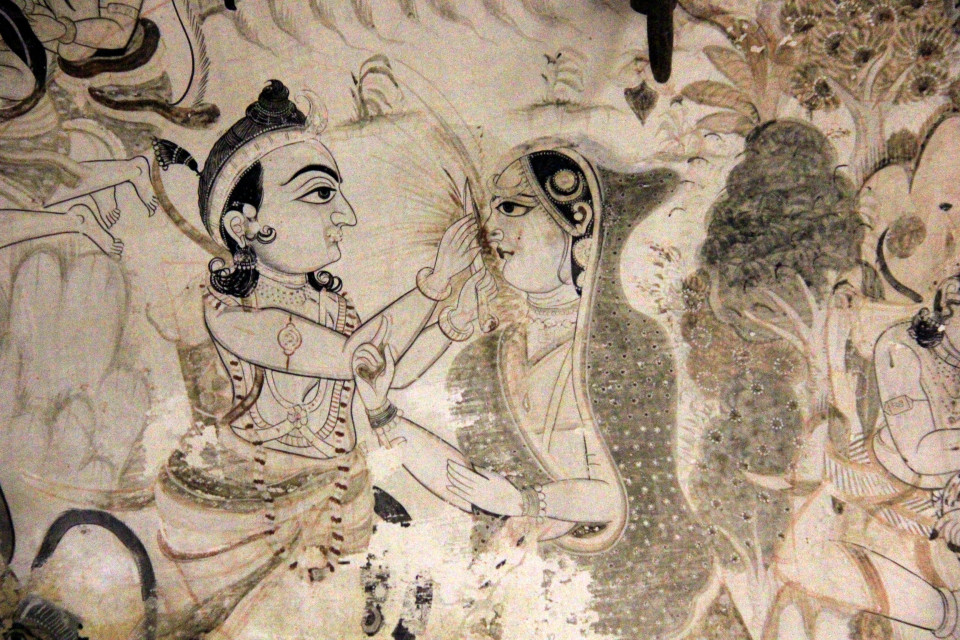 The queen of hearts and her lover of Orcha

The next day I woke up early, had a quick rustic breakfast at the Grace of India restaurant and went back to the Orcha fort complex. It was around 8 in the morning and the area around delicately carved Chaturbhuj temple hummed with activity. Bells tolled, worshippers queued up neatly with their offerings and beggars crawled all over the place. It was a carnival of hope and faith in the midst of grunge and grime. Flower sellers, incense and vermillion peddlers, shops selling fly riddled sweets, cheap fake jewelry, sandalwood slices and colorful images and statuettes of various Hindu deities lined the narrow corridors around the temple. The garishly simple Ram Raja temple glowed a lovely ochre in the dusty morning light. The Ram Raja Temple is perhaps the most important though unusual of all the temples in Orchha. This is the only temple in the country where Lord Rama (an important mythological figure of high religious importance) is worshiped as a king and resides in a palace.

According to legends, once Lord Rama appeared in a dream to king Madhukar Shah and directed him to build a temple for him. The king followed the instructions given by Rama and brought his idol from his birthplace Ayodhya. Since, the construction of the temple could not completed before the arrival of the idol it was kept in the palace till the temple got ready. However, the king remembered that Lord Rama in his dream had specifically mentioned that his idol should not be removed from the place where it had been originally placed. So the king left the construction of the temple midway and the palace where the idol was kept got converted into a temple. It was a pretty strange sight to see a plain looking garishly coloured important temple in the middle of such glorious ruins. It was primped and too well maintained to blend in with the rest of Orcha and somehow in my eyes lost in individuality. I gave it a amiss, walked all over the massive Chaturbhuj temple instead.

Chaturbhuj temple was specially constructed to enshrine the idol of Rama that remained in the next door Ram Raja temple. Built upon a massive stone platform and reached by a steep flight of steps, it was a massive intricately carved monument which shot high into the sky and provided amazing views of Orcha. Lotus emblems and other symbols of religious significance cover the delicate exterior ornamentation and gorgeous emerald coloured parrots with bright red beaks fill its every crevice. The sanctum however was modest and chaste, fitful for the humble Lord Ram and had high, vaulted walls emphasizing its deep sanctity. It provided a deep womb like feeling and I sat there watching the parrots for a long time. Although “the” thing to do in that temple is to scramble all over the place and discover exciting hidden rooms, the plain honest sanctity of the temple left me sated enough to just feel the peace the womb provided.

It was my last day in Orcha, so I hurried back to the fort complex to finish my walking tour. As usual gaudy holy men, clawing beggars and over eager guides accosted me but I kept to my off beat dirt trail and kept walking. Rai Parveen Mahal stood on my left and I walked into the beautiful poetess’s bower. Rai Parveen was an accomplished poetess and a very talented musician, who was also the beautiful paramour of Raja Indrajit Singh (1672- 76). The Mughal emperor Akbar (Jahangir’s father) was so captivated by her that he ordered her to be sent to Delhi.Indrajit Singh was too weak kneed to defy the emperor’s orders and so Rai Parveen went to the Mughal Court in 1602 to save Orcha and its ruler from the imperial wrath.She appeared before the emperor and recited the famous Rai Parveen – Akbar couplet (penned by he during her heart breaking journey). The verses goes as follows-

Meaning, 0′ good and intelligent! Please listen to the prayer of Rai Praveen. Only bari (a low caste among Hindus), barber eat from a plate, food from which
has been partaken by someone else.

Akbar,immediately got the hint and after rewarding her for her purity of love for Raja Indrajit, returned her to Orcha with full dignity and honour. She was on my mind,when I entered her palace and she was everywhere there too. A low, two-storeyed brick structure the simple exquisitely charming structure embodied this amazing lady in love with a weakling. Designed to match the height of the trees in the surrounding, beautifully landscaped gardens of Anand Mahal, with its octagonal flower beds and elaborate water supply system it’s skillfully carved niches allowed hushed light into the Mahal and made it exquisitely romantic. It had a main hall with couple of smaller chambers and the the second floor was resplendent with scenes of poses and postures of the sensuous classical Indian dance.

Thankfully I was the only one at Rai Parveen Palace and was left alone with her. She moved me like no other and I wondered how this exceptionally talented and capable woman felt at being bartered off by her own lover. It felt demeaning for a lady of her class (for any class for that matter) and I felt her anklets, doe eyes and deep sighs mingled with the intense beauty of her abode. I left her soon before she overpowered my mind and walked around directionless to settle my thoughts.

Raj Mahal palace appeared as I aimlessly ambled past the remnannts of elephant stable and high domed neat camel shelters. A soft breeze and silence accompanied me inside the solid square structure, whose rather plain exterior belied its exquisite interior beauty. The palace was built by the king Bir Singh Deo on a hillock and has two wings of five storeys and four storeys each. The King’s chamber faced the sanctum of the Chatturbhuj temple and provided a private view of the idol enshrined within it.

The highlight of this rather impersonal looking structure was its magnificent murals. Delicate Bundela paintings covered the ceilings and parts of the walls, depicting scenes from the epic Ramayana and the the pomp and glory of the Bundela court. Natural light fell through the angled shafts and illuminated the rooms in a dreamy ambiance. The king’s quarter interestingly had interconnecting rooms and his royal harem’s exquisite stone grilles and delicate mirror works revealed a well concealed intimate side of this rather religiously stern building.

I paid the Phoolbagh (Flower Garden) cursory visit before heading out towards the banks of the Betwa River. Laid out as a formal garden, Phoolbagh complex portrayed the refined aesthetic tastes of the Bundelas. A central row of fountains opened into an eight pillared palace-pavilion and a subterranean structure below worked as the cool summer retreat of the Orchha kings. An ingenious system of water ventilation connected the underground palace with Chandan Katora, a bowl-like structure from whose fountains droplets of water filtered through to the roof, simulating rainfall.

Lunch happened again at the gorgeous Amar Mahal, where I relaxed till the sun was ready to set. A friendly local gave me a lift on his motor cycle and we rode by the gurgling Betwa to the cenotaphs or chatris. Fifteen cenotaphs of the Bundela rulers and members of their family stood proudly and even the sun seemed diminutive in their looming presence. The chhatris were on a square platform and housed the sanctum of similar shape. The sanctum held the ashes of the cremated princes and princesses and a marble statue of Madhukar Shah and his wife flanked the entrance. Although imposing and larger than life it was very eerie and gave me a strange feeling of being watched by unseeing eyes. The sun was too mellow and not a single human soul apart from me was there. Flocks of vultures circled as I walked around the home of the dead Bundela clan.

The chatris are supposed to be climbed for fantastic views of the “hidden” city(Orcha means hidden in Bundela language) but the flocking vultures and my imagination running wild gave me goosebumps. I left hurriedly and ran down the road till I reached the Betwa River bank.Immediately humanity swallowed me up and a beautiful sunset softened the harsh cenotaph silhouettes. It had been an amazing trip, moving, extremely touching and absolutely magical. Orcha had touched the core of my heart with its poignant history, forgotten treasures and stunning time frozen quality. Larger than life and unreal, it was indeed hidden, doing justice to its name and defeated the crush of time, like its proud Bundela rulers.

Leaving the living Orcha behind

I went down the memory lane

To the simple Rai Parveen Mahal

Where her presence seeped out from its every nook and cranny

The camel shelter let in some freshness

And I left behind

For the staid Raj Mahal

A palace fit for an understated king

It was an exquisite artist’s studio

It had a sensuous side too

In the king’s chambers

With its stunning stone grille work

From amidst the frozen flowers

Strangely Orcha in my eyes

Did not exist in them

But in its beautiful long gone residents