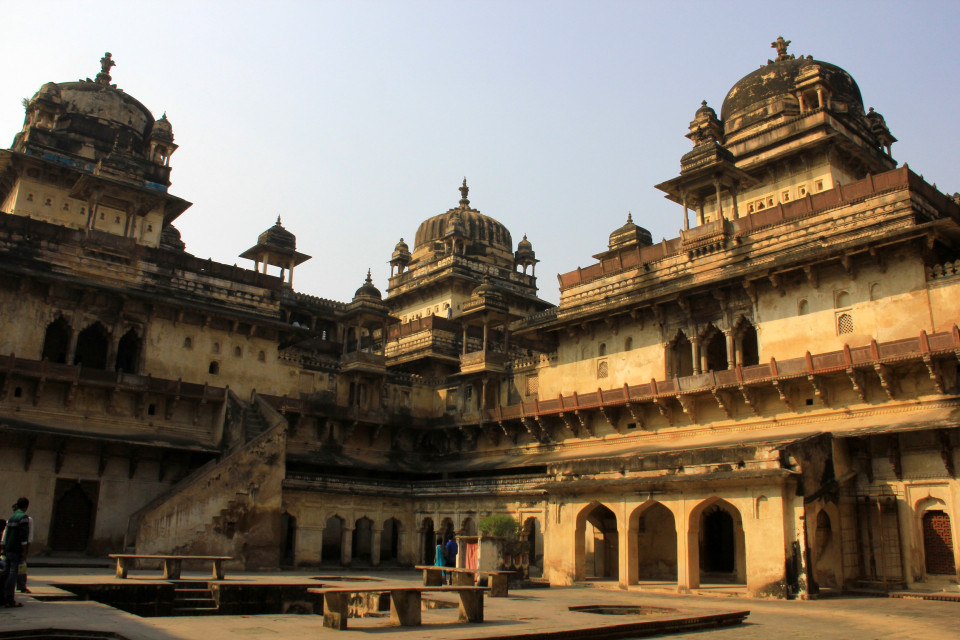 All’s fair in love and war in Orcha

Jahangir Mahal (Palace) is one of the most admired and impressionable palaces of India. Built in 17th century by King Vir Singh Deo for the Mughal Prince Jahangir, this magnificent building is an epitome of beauty and friendship. Prince Salim was known for his love affairs which riled his father the great Emperor Akbar to no bounds and Abu Fazl, one of Akbar’s nine gems (courtiers) thrived on this rift. It was Prince Salim’s most iconic love affair with the beautiful courtesan Anarkali which ultimately lead to the birth of the Bundela Rajput state of Orcha.

Abu Fazl advised Emperor Akbar to disinherit Prince Salim from the Mughal throne, after his affair with Anarkali became public. Prince Salim, upon knowing this revolted against his own father and Abu Fazl was sent to quell the rebellion by the emperor. Abu Fazl marched to meet the rebellious army, but he had to cross Badoni, Vir Singh Deo’s territory en route. Vir Singh Deo helped his friend, Prince Salim by vanquishing the emperor’s army and presented the severed head of Abu Fazl to his friend. After Akbar’s death when Prince Salim inherited the Mughal throne as emperor Jahangir, he repaid his old friend’s favour and gave away the whole Bundelkhand region to Vir Singh Deo. So while the beautiful Anarkali was sentenced to death for falling in love with wrong person, the famous Mughal father – son falling apart turned Vir Singh Deo from a local chieftain of a fiefdom to the king of the entire region of Bundelkhand.

In fact Emperor Jahangir himself came to attend Vir Singh Deo’s coronation and the magnificent Jahangir Mahal was built in his honour. Situated inside the Orcha fort complex it is an excellent example of Indo Islamic style of architecture. The Orchha fort itself is surrounded by a thick battlement wall and is approached by a causeway over a fine bridge. It is kissed by River Betwa and the entrance of the complex is nothing short of walking back in time. Hermits, beggars and street dogs dot the stone bridge and make the walk hassle prone, but once inside the complex, a completely different era emerges. The littered Betwa river, flows silently underneath the stone bridge and only occasional river rafters give away the prevailing time and age.

Heavy nail studded doors lead inside the complex and the imposing Jahangir Mahal immediately bears down upon its visitors. After entering the complex, I walked along the dirt trail past Rai Parveen’s Palace, elephant and camel stable till the gorgeous facade of Jehangir Mahal stood in front of me. The entrance facing the east was elaborate and richly carved. The traditional gateway and the walls were lined with exquisite turquoise tiles and two stone elephants with hanging bells guarded both sides of the doorway. In earlier times the elephant flanked gateway was used exclusively by the King and the arrival of the monarch was announced by ringing the bells.

I walked inside the rich cool interiors of the Jahangir Mahal and was immediately transported to another time and age. A stunning multi storied structure it had 100 rooms, numerous courtyards, hanging balconies, porches and fantastic domed cupolas. A lovely sunny courtyard opened up inside, which had a shallow tank in the middle, flanked by stone benches. The courtyard was surrounded by living quarters that were built for Jehangir and his entourage. It was ringed with many grand stairways and intricately carved trellis worked balcony laced around it. Lovely hanging porches overlooked the bustling courtyard and while walking around the balcony from one porch to another, it was impossible not to imagine tinkling toe bells and soft hushed giggles of ladies of bygone era.

These porches (called jharokha=peep in Hindi) provided those regal ladies and womenfolk views of the bustling royal court, while at the same time guarded them from the crassness of unknown male stares. These jharokhas used to be shielded with woven grass/bamboo curtains, called chiks which were scented with natural oils and sprayed with water to allow the ladies fun peeps and cool fragrant air. It provided the lovelies their daily dose of eavesdropping from their fragrant naturally air conditioned opulent interiors. The other side of the palace faced the timeless Bundelkhand region and as far as eyes could see emerald greenery, royal tombs and ambitious history stretched.

I walked around, played hide and seek along the interconnecting rooms and took in the faded glory. The palace still held impressive traces of stunning tile work in delicate floral and paisley pattern. Sun proved to be friendly that day and stayed high on the sky for too long. I roamed along its magnificent interiors till my poor feet gave up and finally took a break at the beautiful Amar Mahal Hotel restaurant. A part of the Orcha fort, Amar Mahal is a heritage MP government run hotel. For a government run concern, the staff were incredibly friendly, the restaurant well maintained and the food was fantastic. I rested there in its old world royal charm, enjoyed my very “proper” high tea and wandered back to my hotel at sunset. I had plenty of days on my hand and did not wish to rush through the gentle pace of Orcha. After all it was a love story and was best enjoyed with time and languor.

And its spiritual opulence behind

I made my way

Fit only for an emperor

Opened into its sunny courtyard

Where I rested there for a while

It was a symbol of loyalty,friendship

And a love affair