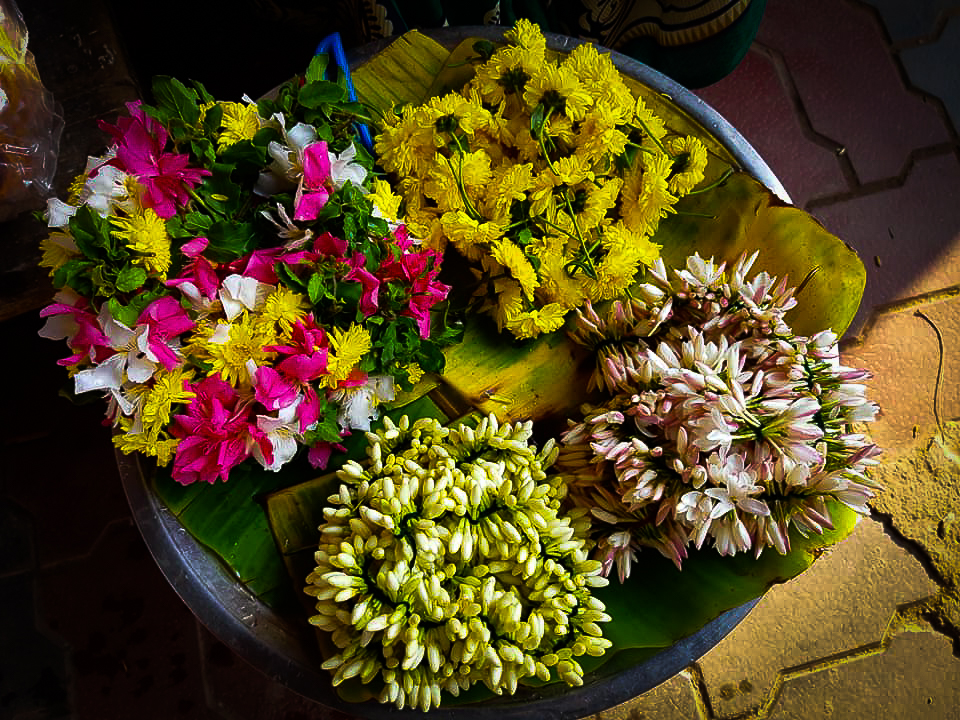 In German, there’s a saying, ‘Das klingt mir gut/nicht gut’. Loosely translated, it means, ‘something suits me/doesn’t suit me’. Madurai doesn’t suit me. This ancient Dravidian city is my pet peeve and both of us have always rubbed each other off the wrong way. I have been there twice during my adult years and there have been numerous childhood trips. Unfortunately, all of them have left unpleasant memories. What remains of my childhood trips are memories of a dusty, sun-baked city, a dry river bed that is littered with trash, and the obnoxious self-important rudeness of the priests at the Meenakshi Amman temple. My later visits did not add any captivating experience to my Madurai trips and I left the city with a relieved sense of escape. It is a pity because Madurai has a lot to offer. From a cultural point of view, Madurai is a treasure trove of Dravidian heritage and the city is a smorgasbord of gastronomical delights.

A gate of the Meenakshi Amman temple complex in Madurai

A whole lot of unpleasantness

I guess I can blame my distaste on my own faults and those I have plenty of. For example, I find organized religion to be tyrannical and have an abhorrence for anyone associated with it. That only suggests my narrow-mindedness because not everybody who participates in the machinery of religion is a pompous, ignorant bigot. I am yet to learn to separate the good from the bad in most situations and the steely commercialism practised at the Meenakshi Amman temple has always left a bad taste in my mouth. The fact that Meenakshi Temple customers – (pardon my caustic tongue) – the devotees, especially the feeble, old, and the poor, who pay the fees and give offerings are often scolded, shoved, and shouted at by the service providers a.k.a the minion priests, have left me disgusted. I could never understand the superiority complex of the ‘priests’ over the devotees – ones who are paying their wages indirectly and the fact that it stems from organized thuggery called religion repel me towards them. That these minions actually believe in their glorious nonsensical bluff of being responsible for people’s spiritual welfare leaves me speechless and it is sad because some of these men are highly educated beings. Understandably, humility, compassion, or belief in ‘kindliness is next to godliness’ evidently is a foreign concept to these so-called ‘divine executives’ and I have seen too many of these priests at Meenakshi Amman temple to really enjoy the architectural magnificence of the complex. My disgust was obviously a thorn in their flesh and twice (the only times I have been there), I have been kicked out of the Meenakshi Amman temple for speaking out against their misbehaviour.

A beautiful stone sculpture in a Madurai temple

I also intensely dislike the division of humanity owing to the caste system and have witnessed one or two shocking discriminatory instances in that city. The sheer amount of cacophony, trash, and dusty heat of Madurai always left me with a sense of feeling trapped, and here, I must apologize for my hypocritical attitude. I am from Calcutta and have been born and bred in an equally messy, dirty, and noisy city. To claim to dislike Madurai for these attributes is like the pot calling the kettle black. However, it is the overpowering combination of all these along with the fact that I don’t understand a word of Tamil except for ‘sappra-food’ or ‘tanni-water’, that makes me not like Madurai at all.

Dear residents of this ancient Dravidian city, please feel free to meet my critical comments about your hometown with brickbats and accept them to be coming from a biased travel blogger who hasn’t had the good opportunity of discovering the soul of Madurai. The next time I am there, perhaps I will fare better but until then let me take you through a photo essay of my journey in Madurai.

I love the intricate details of a south Indian temple gopuram

A flower seller outside the Meenakshi Amman temple

Ironically the last time I saw my father alive

Perhaps that is called karma.