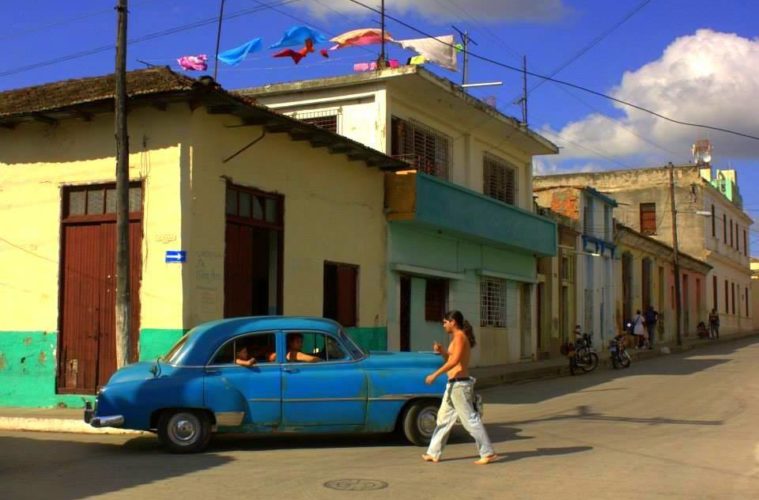 I stayed in Santa Clara for two days with a sedate elderly couple who had a huge orange cat. They also had limited fluency in English and both being hard of hearing, neither of us initiated many conversations. Their huge striped cat strangely took a strong territorial dislike for me and always hissed and spat whenever I approached my hosts. While it gave me lots of space and “me time”,  Santa Clara evenings without the familiar local touch, became extremely boring. On my first day at the student city, I fell asleep immediately after arriving at the casa and by the time I woke up, the Cuban sun was mellow in the sky. I took some time to sit in the casa’s sunny courtyard, and enjoy the experience of being in another city in Cuba. It was also quite relaxing there as the courtyard had a lush garden in which blue-green salamanders slithered across old stucco walls.  As a fresh breeze caressed my face, I contemplated on my evening plan to walk around the cobbled lanes of Santa Clara.

This is Santa Clara.

A laid-back historical town, Santa Clara was very different from bold, busy Havana. It was a friendly student town, which got famous for hosting Cuba’s raunchiest drag queen parades and liveliest street parties. These got it into the tourist circuit as well and many travelers visited this as a short trip from Havana. Santa Clara’s brazen transsexual and gay communities took me by surprise since I was under the impression that Cuba seriously frowned on such matters. And so it was that on a Saturday night by sheer coincidence I found myself in Cuba’s most happening party town. Santa Clara’s street parties were of legendary repute and given its saucy tastes, it was befitting the young free-spirited town. Incidentally, Santa Clara is a pilgrimage site for Che believers, since his liberation of the city in December 1958 marked the end of the Batista regime.

It is considered to be Cuba’s most revolutionary city.

Santa Clara town square was already humming with activity in the early hours of the evening and the lined up food stalls churned cheap delicious quick eats. The burger men and pina colada vendors sold their homemade goodies next to the ice cream and coconut peddlers and refrescos and jugos de natural were consumed in gallons. I was especially fond of the sweet tarty tamarind juice and it was the perfect antidote for that still sultry Caribbean evening. As the sun started setting, stringed street lights began lighting up and music poured from every corner of the town. It was an eclectic mix of reggae, salsa, and other Latin beats and local bands jammed from warehouses, shop fronts and sidewalks. All around us people swayed slowly to the groovy beats and a vibrant happy energy went through the crowd. Sweepers in snazzy attires and quintessential Cuban cigars flirted with sprightly old ladies in heels and brilliant Gulmohar petals blew in the air. It was a magical sight and I stared in amazement as workmen, vegetable sellers and horse cart drivers jammed, danced and drank ron (rum) straight from the bottles.

It is a laidback student town.

In Santa Clara, you just got to dance the weekend night away

The Cubans were very generous with their ron and they had a huge knack for dancing. Predictably, the music and dancing picked up speed as the evening progressed and after a few potent ron cocktails in coconut shells, I wandered inside Santa Clara’s racy Club Mejunje. Set in the tastefully restored roofless ruined building, Club Mejunje was a national institution of Cuba’s fiercely proud transvestites and homosexual movement. It turned out to be the highlight of my Santa Clara evening and I loved it proud, positive attitude. Being a solo woman traveler gave me no unwanted attention and I could finally let my hair down and dance way past midnight. The club night ended with a spectacular drag queen show and I returned to the square, where a massive street party was in full swing. The otherwise quiet tree-shaded square was filled with a sea of shimmying, swaying bodies at that time of the night and entire Santa Clara along with the neighboring areas seemed to be dancing there. A huge flat TV screen strung in a corner belted out groovy music and the crowd danced in unison. Elderly couples twisted and turned, mothers with babies on their hips swayed provocatively and even the injured with plastered limbs shimmied from their wheelchairs. Children in itsy bitsy adult clothes danced like never before and even the toddlers moved to the intoxicating beats in perfect rhythm.

Leaving Santa Clara was not easy, but Trinidad was calling

Thankfully my casa had no curfew time and by the time I managed to stumble back to my room, the Sunday sun lit the eastern sky with pale lavender and pink. The angry orange guard cat hissed at my late arrival and by the time I crashed on my bed with a furiously spinning head, she had scratched arms and legs into ribbons. Blame it on the dancing or the intoxicating night, but it took some efforts to make my head be still and I slept for a few hours before rushing for my Viazul bus to Trinidad.

You may also like: A slice of the Cuban life

Santa Clara was a naughty one.

It was bold, and quite an eye-opener.

A world apart from busy Havana,

It had a quintessential

Also loaded with lots of character,

Santa Clara was quite a headstrong rebel.

and the quaint lanes

Of Santa Clara were filled

With bold US bashing graffiti

And much to my surprise,