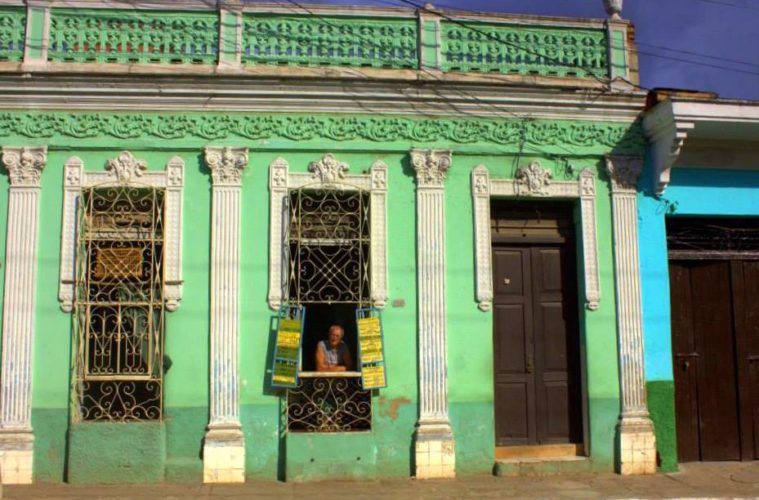 A slice of the Cuban life

It rained heavily the next morning and the Cuban bus company Viazul cancelled all its services. According to Mercedez, cancelling without prior notification was predictably Viazul and with no internet, TV, phone connectivity, boredom settled in fast. The rain also turned out to be relentless, creating an unpleasant stickiness and the salty suffocating humidity, which enveloped Havana like a thick blanket made the big fat flies swarm in hordes. They buzzed around in the most annoying way and stuck on every surface like ugly magnets. Long story short, it was a very disappointing morning and I stayed holed up in my casa, praying feverishly for the sun to come out. The rain stopped sometime around mid-day and Viazul thankfully resumed its services. My bus to Santa Clara, however, was scheduled for the next morning and to pass time, I accompanied Mercedez to the supermarket in Miramar. While in most countries across the world, going to the supermarket may be the most mundane chore, in a Cuban life, it was nothing short of a celebration. To me, the experience was a major shock and a reality check which felt like a punch in the stomach.

Like the strange duality which existed in all aspects of the Cuban life, their shopping too consisted of two systems. All Cubans had a government-issued ration card, which entitled them to some basic necessities per month (like twelve eggs, some sugar, rice, cooking oil, salt etc) and for the rest/extra, they depended on the outrageously expensive supermarkets, where most products were imported. The Miramar supermarket, like the rest of them in Cuba, was a dismal place filled with really bad products which were being sold at phenomenal prices. Tacky, nylon clothes, sad racks of processed meat, a dismal array of toiletries etc stared back at me and I pounced on the nearest box of milk. In the casa, Mercedez always ignored my request for milk with my tea and I found it puzzling, given her warm, generous nature. The mystery got revealed at the Miramar supermarket like a heavy load as I discovered, milk in Cuba to be one of the rarest and most expensive commodities.

Life in Havana is full of the Caribbean sunshine.

Milk is a precious commodity in a Cuban life, but the organic veggies are nearly free

Only the pregnant, ailing, and babies, were entitled to receive milk and suddenly the serpentine queues at Coppelia Ice-Cream parlour demystified by itself.  Regular items from our everyday life like Pringles, cookies, chocolates, fruit juices etc were sold at mini ransoms and this aspect of the Cuban life shocked me speechless. On our way back, we stopped by at the neighbourhood farmers’ market (another Cuban life residential locality feature), which was aimed at catering to the locals.  In 2014, in Cuba, every urban street/village had a government-approved vegetable shop/agricultural market where locally grown bananas, potatoes, tomatoes, peppers, mangoes etc were sold at government regulated prices. We returned to the casa after bags full of vegetables and I retired to my room with a book.

In Cuba population census is counted according to skin colour.

A blessed Cuban life during the times of the Tainos

Cuba piqued my interest and Havana’s paradoxical impoverished grandeur made me intrigued. Founded in the 16th century by the Spanish, Havana was named after a local Taino chief called Habaguanex. Descendants of the Caribbean indigenous Arawak people, Tainos were the principal inhabitants of Cuba until the European contact in the late 15th century. Although many believe that Habana was derived from a Dutch word, “havenne”, meaning harbour, the island’s Taino roots cannot be denied. In fact, Cuba, which was the largest island of the Antilles, was named after a Taino word “cubao” meaning “where the fertile land is abundant” or “great place”. The island was indeed been a great place and the Cuban life of that era was prosperous until the European conquerors started looting, killing and enslaving the indigenous natives before turning it into their colony. The Tainos eventually perished, either by force or by European infectious diseases to which they had no immunity and their captive women gave birth to a new generation of islanders, who until 1981 official race census were called as mulattoes.

You may also like: My first days in Havana

Cuba was consecutively ruled by the foreign rulers.

And then came the Spanish, English and the Americans

The Spanish conquerors made Havana as their jumping off base for the South American conquests and its strategic location was the stopping point for their riches laden ships, ferrying between the New and the Old Worlds. Due to frequent attacks from the pirates, Havana’s historic district was fortified by its Spanish conquerors and they built some of the most beautiful buildings in the city. Along with the expansion of the Spanish might, Havana’s importance also grew along with bringing along a string of other foreign rulers like the British and the Americans. The 20th century brought the American occupation of Cuba and the city witnessed a splurge of development. Apartment buildings, mansions, theaters etc mushroomed at a breakneck speed and Havana turned into an exotic capital of appeal. Numerous activities ranging from marinas, grand Prix car racing, musical shows, and parks etc raged throughout the city and mafia muscling became a part of the Cuban life.

Cuban life post-1959 revolution and the regime of Fidel Castro

The 1959 revolution and the regime of Fidel Castro ushered in a strict communist model and post Soviet Union collapse, Havana nearly died out. When the Soviet-backed subsidies dried out leaving Cuba severely cash-crunched, the valiant Habaneros soldiered on. After going through so many financial and eventful roller coasters, the Cubans became champions in surviving and that was what kept their fiery island afloat. Havana’s wealth started with a flourishing slave trade, which gave way to the to the sugar industry. Sugar was Cuba’s most traditional industry with maximum factories being centered around Havana and cigars, rum, shipbuilding also being prominent. Nowadays tourism is Cuba’s biggest revenue earner, followed by biotechnology and education. Post-revolution, Cuba’s traditional capitalist free-enterprise structure was replaced by a heavily socialized economic system and in Havana, Cuban and U.S.-owned businesses got nationalized. Despite Raul Castro’s opening up of free enterprise in 2011, even today most of the businesses in a Cuban life are solely under state control, with the average monthly salary of locals being 20 USD per month.

In a Cuban life, you earn 20 USD a month in your skilled job

Thus it was no wonder that every window, living room, bicycle, and carts in Havana in 2014 were peddling flowers, fruits, posters, food, clothes, and even pirated toothpaste. Strange, yet eventful, Havana’s history is crammed with ground shaking incidents, each giving the prevalent Cuban life its own layer of uniqueness. This showed directly on Havana’s demography, which was officially based on skin colour (not race) and it included whites, blacks, mulattoes, and Asians (the 19th and 20th century Chinese brought in by the Spanish settlers). The city’s history turned out to be as mentally draining and overwhelming as its appeal and I looked forward to sublime Santa Clara, the next day.

In a Cuban life, economic reality is a joke.

The Caribbean queen can sure make its visitors curious.

Havana with all its tough history and grandeur was draining

And I looked forward to the lovely student town of Santa Clara.