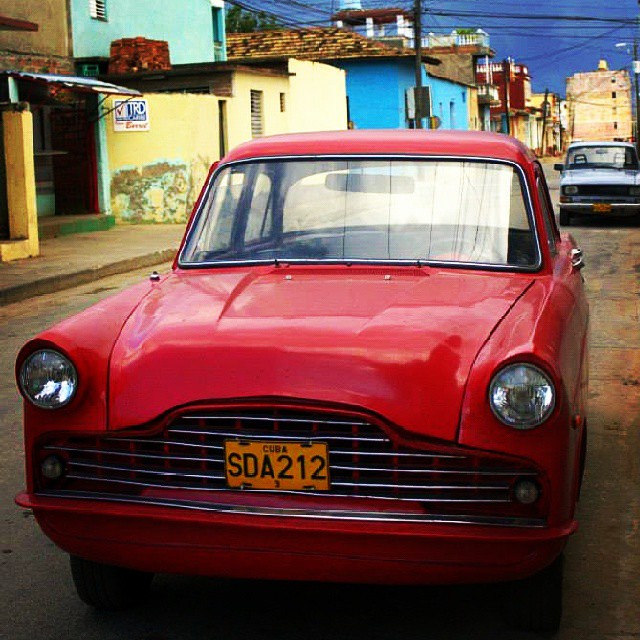 36 photos that may tempt you to visit Cuba

Visiting Cuba was my trip of a lifetime. Incidentally, I travelled there in 2014, during the Obama Presidential tenure and the country was in news for easing its travel restrictions for the USA neighbours. There was a sudden rush of everybody going to Cuba and the flights and cruise ships were heavily booked. This sudden influx of tourists, especially the Americans was bringing about many changes and at the time of my visit, the tiny island nation was slowly starting to shed its centuries-old aura. Winds of change were palpable and though, Cuba’s timeless charm on the brink of extinction, it was exciting to see it metamorphose into something closer to the real world. It was like watching a caterpillar turn into a butterfly. The process was slow, yet it is undeniable that Cuba was poised for change.

Despite all the exciting changes, Cuba was still relatively naive in its travel infrastructure and lots of travel hiccups continued to be there. My month long trip too was quite exhausting and due to its slow, circuitous nature, my travel energy and finances hit the rock bottom. It brought me to the brink of dipping into my savings to sustain for the following months and there was no denying that Cuba was a very expensive destination. Today, I consider myself lucky to have explored Cuba at a time when beauty, innocence, and phantasmagoria dripped throughout the island and I have a treasure trove of priceless memories in photos. Presenting a photo essay and travel excerpts of Cuba through my eyes. These images are guaranteed to send you packing your bags.

Some writer described Cuba as a prince in a poor man’s coat and I cannot agree more. Innocently fated to confound and bedazzle at the same time, Cuba is beyond the descriptive power of words and it is one of the most fascinating destinations in the world. The grand hotbed of revolutionary heroism, platinum blonde beaches, vintage cars gliding past faded colonial buildings and amazingly upbeat people who dance on an endless ribbon of salsa, rumba, and rum is hard to resist; But beneath the magnificent gold dusted facade, the real Cuba throbs with innumerable untold secrets.

You may also like: My travel memories of Bolivia

For the best Cuban experiences, scratch beneath the surface

She is the real grand dame

My cross Cuba trip of thirty days covered many cities and villages and from dazzling Havana, magnificent Trinidad, flower-filled La Boca to the mysterious Baracoa near Guantanamo, it was an exhilarating roller coaster ride. In the upcoming posts, I will share my detailed trip and a travel guide to Cuba, a country which is nothing short of a classic.

Havana is truly the crown jewel.

Havana is a glittering, hard jewel

My Havana memories are varied. While placid Miramar, where I stayed, charmed me speechless, the gritty, yet drop dead gorgeous Habana Vieja and Centro shook my travel safety net. The preserved and photogenic old quarters with their neoclassical mansions, romantic Malecon and pulsating were a traveler’s delight and I found the Santeria filled back streets to be slightly unnerving. The reason was the city hustlers who peddled everything from contraband Cuban cigars to underage prostitutes and being a solo woman traveler in Havana was sometimes a harrowing affair.

Looking for offbeat destinations: Check out the Iran travel series

With its vintage glamour

And stylish urban life, the capital city is hard to resist.

Santa Clara was my second Cuban destination and it turned out to be the perfect antidote for bold, overwhelming Havana. A lovely student town, famous for excellent medical colleges and an important historical site of the Cuban revolution, Che smiled from nearly every wall graffiti of Santa Clara. It was the first Cuban town, where I saw beautiful Pakistani, Bangladeshi senoritas strolling in the square in salwar kameez and parasols, while cheerful local ladies sampled cocktails sold by the street vendors. Being the home of the best street party in Cuba, Santa Clara also nearly killed me from the vilest hangover and I loved its elaborate wrought iron window grills.

The student town of Santa Clara

Was the perfect combination of colonial and young.

Journeying down the highways of Cuba is never-ending fun

Some of my happiest travel memories are of the Cuban roadways. I spent a considerable amount of time on the carnival-like lively national highways on Viazul buses and deeply fell in love with their laidback attitude. The Viazul buses start whenever the driver feels like and he is mostly a good-humoured, Mr. Funny Bones who loves to interact with his passengers and keep them entertained with his wisecracks. Everybody is happy on a Viazul journey and though usually never on time, passengers and the staff indulge in the luxury of shopping, gossiping, making innumerable breaks and quick kisses. The Cuban roads carry all kinds of modes of transportation known to mankind and from vintage cars, tourist coaches, cleverly innovative public transport to horse and mule carts, they make a trip an experience of a lifetime.

Recommended Read: Yemen through my eyes

And small roads are ever delightful.

Just how beautiful is Trinidad

Of all the places that I visited in Cuba, Trinidad was the most beautiful and least liked. A perfectly preserved, one of a kind Spanish colonial settlement where time genuinely froze, Trinidad was founded on sugar and slave trade wealth amassed during the early 19th century. The town’s fortunate past was clearly evident in Trinidad’s stunning colonial-style mansions which were decorated with Italian frescoes, Wedgewood china, and French chandeliers. Blessed with the nearby spotless white beach of Playa Ancon, Trinidad witnessed the maximum number of tourists after Havana, yet the town retained a quiet old world charm. Complete with winding cobbled streets, snorting donkeys carts, excellent home stays, paladares (restaurants) and dance/music lessons, Trinidad was also very expensive, un tourist friendly, and full of aggressive hustlers touting nearly everything under the sun.

Lent it a wealthy enchanting aura.

I never wanted to go to Gibara, a small ghost town near the industrial city of Holguin when a stormy night and a beer drinking donkey took me just there. Pancho, the beer-guzzling star was the reason why I traveled to Holguin and the lovely landscape of pincushion hills, rolling meadows, pine groves and orchids kept me hooked for a few days. Rain, however, played the spoilsport and Pancho was on vacation when I reached Holguin. The industrial city had not much attraction other than a day trip to Gibara and it was a very scenic drive through the wild Cuban countryside.

Heading to Gibara, when the donkey stood me up

I fell in love with Gibara at first sight and although it had no special contemporary reputation to boast of, my heart simply flipped for it. Gibara, in my eyes, was like my grandmother’s handbag; stuffed with things of vintage nature, lovely and of no use in the modern day world. The Cuban town hosts a premier Festival Internacional de Cine Pobre (International Low-Budget Film Festival) every year in April and it was a friendly, eye-catching little ghost town. Gibara exuded intimacy and gorgeous pastel beauty and the rain made it lovelier. A thunderstorm preceded me to Gibara and by the time I reached there, the freshly washed blue skies welcomed me with gorgeous views. The result was an incredible wet coloured town, where pinks, peaches, and yellows got softened by the rain and Gibara’s beautiful but dilapidated architecture cast a bewitching spell.

It is the most beautiful ghost town

I have ever seen.

Travelling by road to Baracoa from Holguin was being crazy

Baracoa was my craziest Cuban adventure, one which I would perhaps not repeat again. While, the destination is closest to my heart and I would return there in a heartbeat, opting for the road trip from Holguin to Baracoa via Moa was being seriously mad. Being cramped in a local Cuban public transport for hours with more people than the contraption can hold was extremely uncomfortable and the drive, although wildly scenic was a wretched one. Baracoa, however, was worth all the trouble and I spent my happiest days of Cuba there. Famous for microclimates and wild landscape, the municipality of Baracoa had everything packed into its natural space and the people were the most welcoming, friendly and warm in entire Cuba.

Baracoa is the most isolated spot of Cuba

Bounded by the Atlantic in the north and by rivers, mountains and forests in all other directions, Baracoa was Cuba’s oldest and most isolated town. The destination’s stunning natural diversity, distinctive table-topped landmark mountain of El Yunque and vibrant cultural scene, such as the annual street festival of April made it one of Cuba’sbest-keptt secrets. Home to many unique musical traditions, changüí music echoed from nearby villages Virginia and Yateras and Baracoa was the home of the Tumba Francesa, a Creole dance inspired by the French minuet. I traveled to Baracoa only because of food and the town is famous for its many unique dishes.

It is located in the

Discovering the food of Cuba in Baracoa

Thankfully, my casa hostess was a warm, welcoming person who loved to cook and she pampered me with some of Baracoa’s exquisite traditional Cuban Creole food. Thus huge plates of fried chicken, rice, beans, breadfruit, sweet plantains, fish stuffed with plantains, garlic-rubbed shrimp and lobster smothered in butter appeared on my table and every meal was generously topped off with huge goblets of local chocolate ice cream or bricks of its famous white chocolate, which are sold in round, flat cakes encased in palm bark.

Cuba only gets better

Baracoa is famous for its rich cocoa production and the region’s natural lushness do not end there. Its rainforests hold thousands of species of endangered flora and fauna and the landscape is wildly diverse. From semi-arid cacti strewn meadows to mangrove clumps, cloud forests, plantations and tropical beaches, Baracoa was one action-packed place and I made some of my most memorable excursions there. While one was an enjoyable picnic in the countryside with my host family, others were arduous hikes to the UNESCO biosphere reserve Cuchillas del Toa (which had contained Alejandro de Humboldt National Park) and the stunning 17-meter high Saltadero Waterfall. Those were very beautiful days and Baracoa was the hardest place in Cuba to leave. Even the small, colonial town with its blowy beauty held a magic charm over me and I loved its slightly rough, raw appeal. There was less panache than the rest of Cuba’s colonial towns and Baracoa’s cobblestone streets were lined with squat buildings whose wide verandas, peeling, carnival coloured paint jobs and weathered tiled roofs held their biggest charm.

Do I need more reasons to always be in love with Cuba?

I left Cuba immediately after returning from Baracoa and my last memories of the time-warped country were the sweetest. They were of mouthfuls of cucurucho, a local Baracoa product of honey, coconut, nuts and fresh seasonal fruit served in cones of palm bark, which I discovered in my handbag by happy accident. I munched on them, as my plane slowly flew away from the timeless emerald island of Cuba. With an island so magical and memories so sweet, it is quite evident that I heart Cuba.

The charm of Cuba

Is impossible to resist

And the sassy star

Is an unforgettable experience

Cuba is one technicolor surreal dream