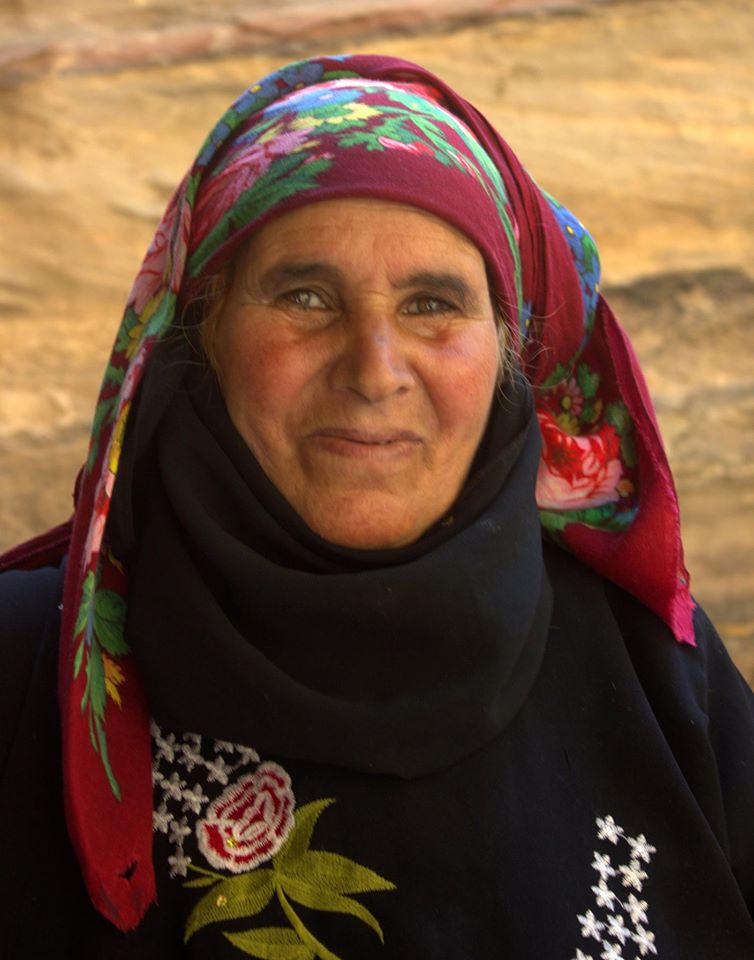 Petra’s most impressive monument was the most difficult to reach. Ad-Deir or the Monastery perched high on the Judean mountains and as we walked to the Nymphaeum, Petra became more and more intriguing. Originally a Roman fountain, it used to be the primary source of water supply to the ancient Nabataean city,  but at present nothing of it remains. A scraggly tree stood at its spot and the grand old place looked sadly desolate. Cardo Maximus or the Colonnaded Street stretched ahead and ruins of columns and arches threw long shadows on the cobbled Nabataean streets. This was the commercial center of ancient Petra and it was hard to believe that both sides used to bustle with shops and stores. A recent archaeological excavation unearthed a large decorative pool surrounded by benches and columns. An island with a building on it, stood in the middle of the pool and it was perhaps a public park for visitors weary after a hard days of bargaining at the Nabataean markets.

Arid slopes on both sides held Byzantine treasures like the Petra church, the Blue Church, the Ridge Church and the Temple of the Winged Lions. These churches shot into fame because of stunning mosaics and discovery of Petra scrolls. Archaeologists discovered spectacular Nabataean treasures like stone idols, painter’s studio (complete with paints, pigments and ceramic pots), marble cutter’s workshops and a supposed to be royal palace with a bridge over the wadi. Carvings of heads of Indian elephants on the next door Great Temple proved how cosmopolitan and well connected the Nabataean traders were and the Garden Terrace laid out in late 1st century BC, had been recently identified as Petra’s “golden age” ornamental garden. The lost city of Petra came alive with our every step and we got more and more involved with the spectacular pre Christian era beauty of the Nabataean capital.

The Monastery was our final destination and we slogged in the afternoon sun for more than an hour. It was nearly a 800 stairs climb and at most parts, it was a lung bursting effort in the open desert sun. Qasr al Bint or the House of the Daughter of Pharaoh got left behind as we crossed the Colonnaded Street and started climbing. It was beautiful and we happily gave the donkey rides amiss.

TRAVEL TIP – Climbing up to the Monastery takes a lot of effort and is best to be tackled in the afternoon when most of the walk is in shadows. Donkeys are available in plenty but archaeologists discourage visitors from using them since their hooves are corroding the Nabataean stone steps. Moreover  these animals are very horribly treated by their owners and most of them are underfed and badly beaten.

We left the Petra basin behind and retraced the well trodden Nabataean steps. Lion Triclinium (a small shrine), the Hermitage (set of caves with crosses) and Bedouin ladies beckoned us. We ignored them all and kept climbing till the giant facade of the Monastery stood in front of us like an optical illusion. It was as breathtaking as the Treasury but less dramatic and ornate. In fact it was powerful because of its looming plain exterior and although its purpose is yet to be identified, most believe that it was a temple. We rested at a cave cafe opposite the rock cut monument and took in its sheer size. A local Bedouin scrambled up on top of its facade and leaped from urn to urn. It was a dangerous trick, obviously popular with tourists and drew everyone’s attention.

We climbed inside inside its single chamber, felt its cool stony womb before walking further to the isolated High Place. The surrounding cliffs were punctuated with Nabataean tombs, caves and cisterns and the ghost city enveloped us from all sides. We sat down at the isolated High Place, took in the god like views of the Wadi Araba, 1000 meters below and talked about our abruptly ended past connection. We had disconnected on a bad note and suddenly it no longer mattered. We were back after so many years and so many life upheavals, together and friends again. Amman had helped us rediscover each other and Petra connected us again. Love they say is the most ancient human emotion and what can be a better place to fall in love again than in the lost Biblical city. Two weary souls, we fell in love with life and traveling again in the grand Nabataean capital of Petra.

We walked past the Colonnaded Street

As we kept climbing

Into the dizzying heights

To the power of the incredible Monastery