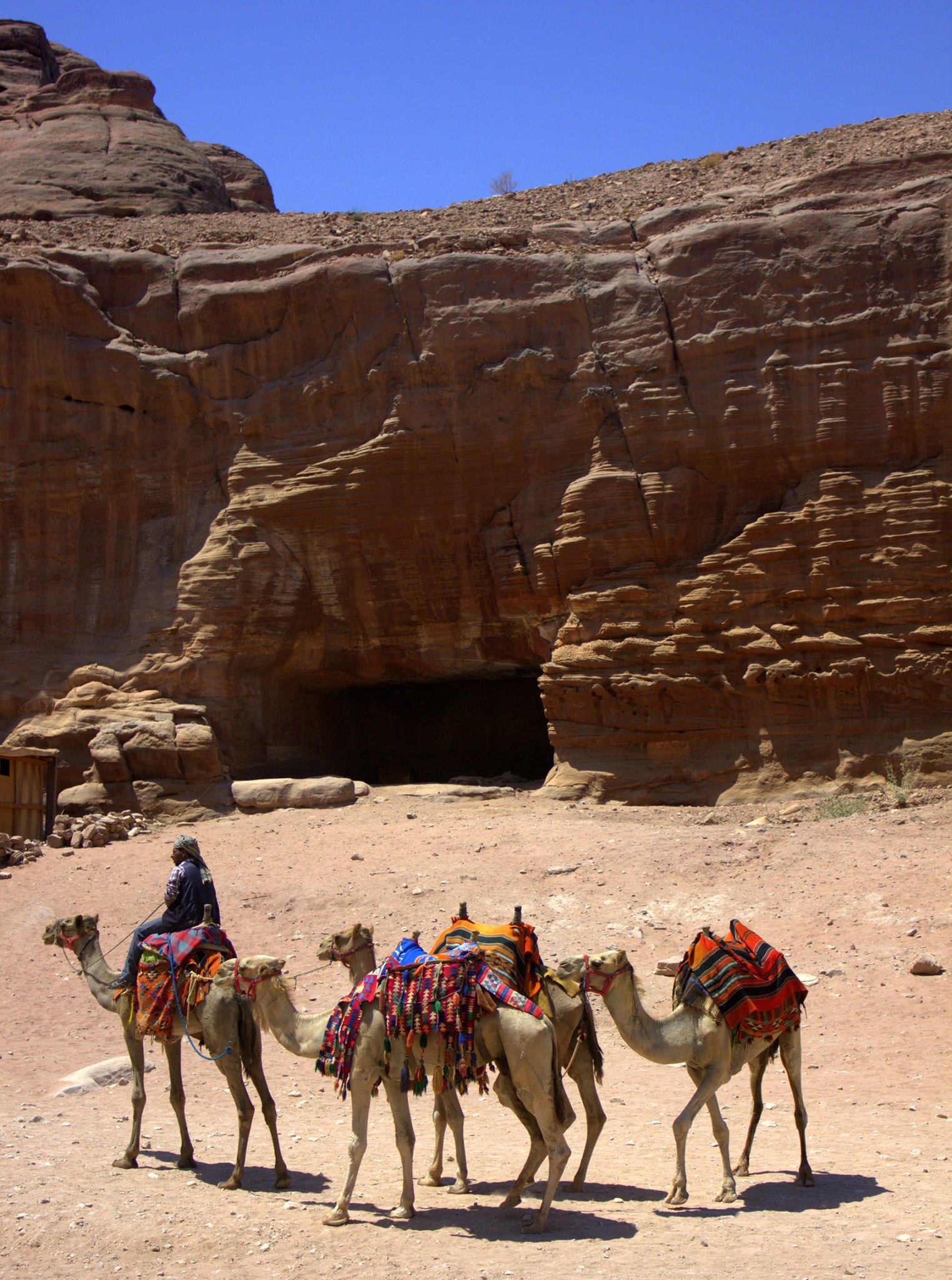 Discovery of Treasury and being really high

Al Khazneh el Faroun or the Treasury of the Pharaoh unfolded at the mouth of the Siq in a most dramatic way. The Siq narrowed at a final turn and suddenly the Treasury loomed like a giant. The effect was absolutely breathtaking and like everybody else rooted us to our spots. It is Petra’s most iconic sight and is an impressive Greek influenced structure carved out of sandstone rock face. It stands 40 meters tall, with 2 floors and an intricately decorated exterior. The lower floor houses a portico with 6 columns topped with floral wreaths and fronton and the topmost half has the famously deceptive “Urn”. Behind the exquisite facade lies a simple, large room carved out of the rock and is actually a tomb (and not a treasury as it’s name suggests).

A little pocket of world existed outside the Treasury and camel drivers, excited tourists, stray cats and Bedouin peddlers filled the space with noise. Sun streamed down directly from overhead and after the dark red cool silence of the Siq, we got hurtled back into a bustling, noisy reality. We stopped for some refreshments at the Bedouin store opposite the monument and stared at the Treasury from the rough hewn benches. It glowed in the sun and the “Urn” proudly displayed its bullet marks. Built in the beginning of 1st century AD as a mausoleum, there have been various legends which gave rise to its local Arabic name Al Khazneh or the Treasury. According to one legend, the structure used to serve as the Treasury of a Pharaoh during the time of Moses and others believed that a band of bandits hid their loot in the controversial bullet riddled second floor urn. Bedouins have been blamed for the urn’s pockmarked facade because they supposedly had tried to break it open with the hope of spilling out its treasures. The urn however turned out to be of solid sandstone and recent excavations unearthed a graveyard beneath the Treasury.

The Siq broadened after we left the Treasury and soon we were walking down the Outer Siq area of the Biblical archaeological ruins of the city of Petra. We were on the Street of Facades and both sides of beautiful rose patterned mountains were riddled with Nabataean graves. With a desert sun high in the sky, the walk became more and more laborious with each passing hour. Petra colours swirled around and we took breaks in the cool dark rock cut graves. No Petra visit is complete without climbing up to the High Place of Sacrifice, so walked up the famous Nabataean stone steps. Because of logistical difficulty of hauling sacrificial animals up to the high spot, many believe that human sacrifices were rampant during that time, although no evidences of it had ever been found. With the sun high on our heads and desert breeze burning our skin, the 45 minutes climb was steep, difficult and lung bursting but the view was absolutely worth it.

We descended on the other side of the mountain and came out in Wadi Farasa. The Garden Tomb and Lion Fountain, the Roman Soldier’s Tomb and Garden Triclinium passed by and we walked straight till we reached the Street of Facades again. The Roman Soldier’s Tomb was supposedly one of Petra’s most important buildings and although nobody knows who lies buried there, discovery of a statue wearing a Roman armament inside the tomb, renders the monument its name. Recent excavations have lead to discovery of a villa with a huge cistern on the cliff above the tomb and this villa controlled a large part of water supply of Petra. It belonged to a very important dignitary, probably the High Priest and slowly the Biblical city of Petra came back to life.

We were in the heart of the Nabataean capital and the 7000 seater weather worn Roman theater sprawled in front of us. Originally built by the Nabataeans to hold religious ceremonies it faced the tomb riddled rock face. After the Roman occupation of the city, the new conquerors extended it further by cutting into the Nabataean tombs. Stone steps leading to the beautifully carved Royal tombs lay on one side of the amphitheater and beckoned us to another of city’s high places. I stayed back at a tea stall, nursed a cold glass of orange juice and rested with sand coloured cats. Trinket sellers, donkey ride peddlers and Bedouin guides hounded me for some time, but I finally had quiet and peace to myself. It was afternoon and most of Petra was empty. Locals rested inside the marbleized rosy tombs and the surrounding sandstone changed colours. It glowed a soft peachy yellow, deepened into deep ochre before darkening into blood red shadows.

Lou came back after nearly 2 hours of exploration of the Royal Tombs and we resumed our Petra walk soon.

TRAVEL TIP – The Royal Tombs have some of Petra’s most beautiful carvings and include the Urn Tomb (Byzantines converted it into a church), Silk Tomb, Corinthian Tomb (Small scale reproduction of Al Khazneh), Palace Tomb (a 2 storied structure built of stone, instead of being carved out of rock face like most of Petra), Tomb of Sextus Florentinus (Roman governor of Province of Arabia) and Carmine Tomb (remarkable for its beautiful band of colours). A guided walk to the Royal Tombs require at least 2 hours and a viewpoint just behind the Palace Tomb provides an amazing aerial view of the Treasury.

Cardo Maximus or Petra’s famous Colonnaded Street stretched ahead of us and mountains ringed us from all sides. The flat topped Umm al Biyara looked desolate in the afternoon sun, but it was not difficult to imagine the urban sprawl of Petra spreading into valleys beyond. From the bustling Outer Siq area, it suddenly became very wild and rocky, but in Petra hey days all those round hills were covered with houses, temples and market places. Most archaeologists believe that the best of Petra is still yet to be unearthed and it was a thrilling sensation to walk over the Biblical dust of Jordan. Petra’s most awe inspiring and difficult to reach sight, the Monastery and holiest of the holy, Jebel Haroun, the burial place of Prophet Aaron or Haroun was still an arduous hike away. Steeped in religious importance, historical importance and stunning natural beauty, Petra was turning out to be quite an adventure and unfolded its magnificent secrets slowly at every step.

Stunned us with its sheer scale

But with limited time on our hands

We moved on towards downtown Petra

On both sides of the ancient red city

Mingled with the Petra locals

And explored high places of the city

After a bit of rest

We continued towards the holy high spot-