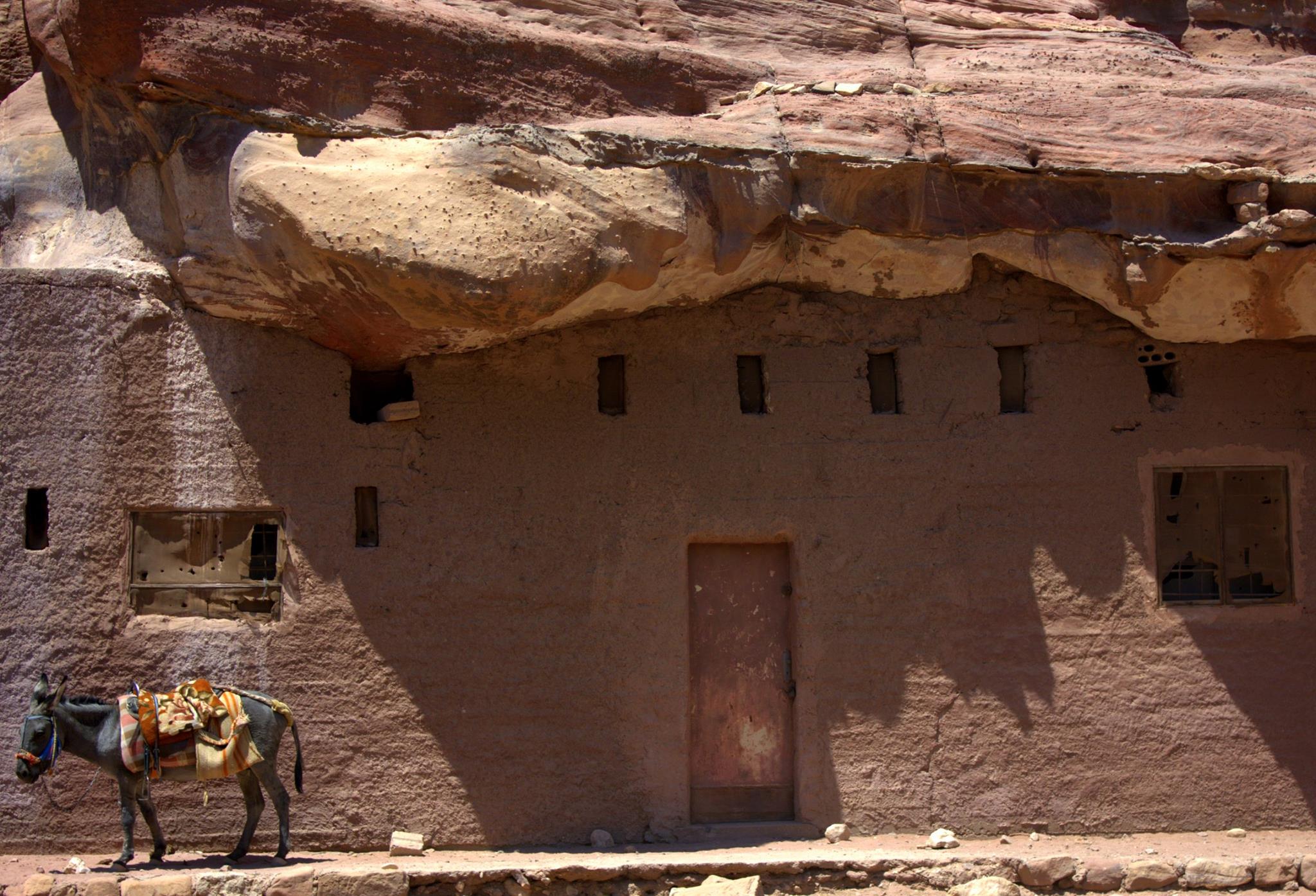 Petra is a historical and archaeological park located in southern Jordan. It can be accessed either by the scenic King’s Highway, where the journey is as interesting as the destination or by the faster, insipid Desert Highway. Built by the Nabataeans in 312 BC, it cascades down the slope of Jabal al-Madhbah and runs along a basin among the mountains. It remained hidden to the world until in 1812 the Swiss explorer Johann Ludwig Burckhardt discovered it and introduced “a rose-red city half as old as time”. An ancient Semitic group of people, Nabataeans made Petra their capital and the center of their caravan trade route. They were an ally of the Roman empire, were heavily into widespread trading and Petra used to be a bustling, cosmopolitan market place.

Based out of Petra, Nabataeans used to command trade routes from Damascus to Arabia and the rose red alleys of this ancient city used to see caravans of spice, silk and slave traders pass through, stop over, meet and rest under a starry desert sky. Nabataeans flourished since they were paid heavily in form of taxes and protection money by these merchants and they excelled in iron production, copper refining and stone carving. The entire city was carved out of sandstone and archaeological studies prove that Nabataeans were expert in controlling flash floods which riddle the area and by building an extensive network of dams, cisterns and water conduits, they created an artificial oasis which sustained their desert city during periods of drought.

Our much scammed horse ride, although hard on the pocket was very easy on the eyes. We rode along the Bab as-Siq or Outer Siq, which was a modern graveled walkway running along the Wadi Musa. In contrast to the rest of the rose red Petra, Bab as-Siq was beautifully golden. There was ample scattering of famous Nabataean carvings along the entire Outer Siq, and the first 3 god-blocks gave a pretty good idea of what awaited us in the later part of our trip. Carved out of rocky outcrops, they were probably shrines dedicated to gods who guarded Petra’s water supply although the locals used to call them djinn blocks. They believed that desert spirits or djinns lived in those blocks and to make it more goose bumpy right opposite the djinns resident, there was a cave containing a relief of an obelisk, which represent the soul of the deceased. We paused in front of Outer Siq’s most famous spot, the Obelisk Tomb and Bab as-Siq Triclinium and took in the Nabataean’s smart architectural sense.

Although often referred as one monument, these are actually 2 different structures stacked on top of each other giving them a towering, powerful aura. The upper Obelisk Tomb contain rock cut burial chambers which are guarded by 4 great obelisks with a central figure. The lower Bab as-Siq Triclinium was actually a dining area, where feasts in honour of the dead were held. It used to be an ancient Roman tradition and the Triclinium housed a single, austere room with rock hewn benches on 3 sides. Across the road an inscription in Greek and Nabataean, declared that “This is the burial place chosen by ‘Abdmank, son of ‘Akayus, son of Shullay, son of ‘Utaih, for the construction of a tomb for himself, for his heirs and the heirs of his (heirs), for eternity and beyond: (he has made it) in his lifetime, in year…of Malichus’. It was an amazing peep into the real estate and advertising scene of the pre Christianity Nabataean era and the entire wadi beyond the djinn blocks, are filled with niches, tombs, water channels and shrines. A sort of an invisible but very much present phantasmagoria of a thriving city rose like mirage in the Jordanian Biblical desert.

TRAVEL TIP- For those looking for an Indiana Jones sort of adventure, try exploring the small side valleys, the area of domes known as Ramleh, Snake Tomb and the less known Petran suburb of Madras (behind the Obelisk Tomb). It is extremely remote, with an unmarked trail of Nabataean age rock cut stairs. A guide would be necessary if you wish to explore the niche, cave and shrine filled wadis, scramble across the hill tops for breathtaking views and enjoying Petra in complete isolation. It is possible to trek all the way to the high, narrow Danqur al-Khazneh to the Treasury, thus avoiding the crowded Siq and watching the famous urn of the treasure house from close quarters.

We got dropped off at the mouth of the Siq, strolled through the towering red gorge in awe and fell in love with Jordan all over again. It was one of the most beautiful walks ever. Although, it looked like a gorgeous red canyon, the narrow Siq was actually a rock mass, torn apart by tectonic forces. The Siq was used as a grand entrance into Petra and both the walls of the canyon displayed remnants of terracotta water pipes, stone cut niches containing baetyli (sacred stones of worship), block like grooves which housed statues and underground chambers, which archaeologists believed were housing quarters of security guards. It was of utmost religious, civic and financial importance to the Nabataeans and I could almost picture trails of weary merchants and their goods burdened animals walking down the Siq expectantly, looking forward to fresh food, water and rest. The entrance of the Siq originally was marked by an ornamental arch, but it collapsed in 1896, leaving now a spectacular 1.2 kilometers of stacks of reddish hued rock masses.

Lou and I walked through the heart of the mountain, which narrowed down at places so much, that it formed natural cool, dark, blushing red boudoir. Benches were scattered ththroughout the walk and we rested on them for awhile to cool our toes and take in the surreal beauty. It was absolutely silent and not even a bird could be heard. Streaks of different shades of curving red formed an imaginative rocky underwater experience and even the bright blue sky was hardly visible. An occasional horse cart sped by and added more drama to the already spectacular place.We had both trawled through the net endlessly, pored over hundreds of Treasury photos but the emergence of Petra’s most iconic building at the mouth of the canyon, took our breath away. One of the most photographed sights in the world Treasury or the Al-Khazneh was simply mind blowing. And it was just the beginning.

We started from the Djinn Blocks

Past the Obelisk Tombs

And trotted along Wadi Musa

Before venturing into the grand Siq

Remnants of past glory

Along the spectacular walk

Thankfully we had rested a bit

Before the unreal beauty of the Treasury blew us away