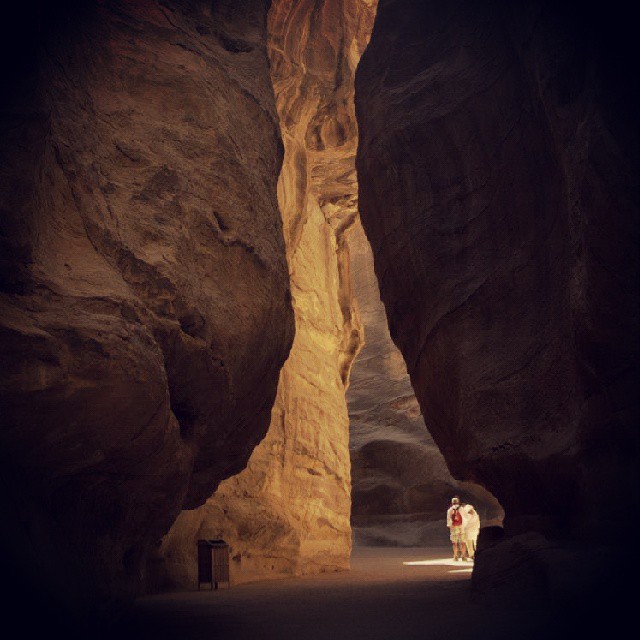 Petra happened the next day and we left a sleepy Amman at 4 in the morning. Lou dozed off immediately in the taxi and I watched a beautiful soft sun rise over the Jordanian countryside. The land lay undulating, broken by hills, little hamlets and strange uninhabited stretches. A deep red sun rose high through different layers of blue and even the high tension power lines which stretched across the desert, looked animated. The smooth broad highway was nearly deserted, with only a few trucks passing us occasionally.

Jordan is a small country with small population and huge spaces of emptiness. It seemed very new to me, someone hailing from a vast country that people sometimes cover entire Jordan in 1 day. I tried imagining Jordan in ancient times when caravans of merchants would pass through this emptiness and suddenly it did not seem so deserted any more. Gas stations blazed garishly and stood out as eyesore in the soft desertscape. Shiny expensive cars lined up at the 24 hours convenient stores and bustling mechanics’ garages hummed with activity, next to small makeshift eateries.

We stopped for refreshments at a small highway restaurant and stepped out of the car to stretch our legs. The morning air was cool and very soft, and it felt good to be out of air conditioning. Yousef, our driver and Lou beatifically sipped herbal tea while the coffee lover me struggled with my cuppa. The coffee was horrible-thick, silty and definitely one of the worst beverages I had ever tasted. I dumped it soon and we continued our journey towards Petra. Due to time constraint, we were on the Desert Highway and while we would reach Petra in 4 hours, it was featureless in most parts. The road became hilly, winding and forested as we neared Petra and fir forests lined the highway. Petra appeared soon and blazed boldly in the cold morning sun. We reached the little historic town and being a Friday (holiday), Petra still slept leisurely. Breakfast hunt turned out to be troublesome and we finally had to settle for a lame omelette, hummus, fried vegetable balls and falafel. I skipped the coffee this time and we hurried towards Petra complex entrance.

We entered Petra and found to our dismay that we missed out the night viewing days by a few hours.

TRAVEL TIP – “Petra By Night” is an after-dark guided excursion into the ancient city that adds an entirely new dimension to your experience of the place; the candlelit walk, leaving the lights of Wadi Musa behind to enter the pitch-dark valley in silence (talking and mobile phones are banned), is magical. “Petra By Night” runs every Monday, Wednesday and Thursday, departing at 08.30 pm from the Visitor Center (arrive 15 minutes early to register), and delivers you back to the Visitor Center around 10.30 pm. Tickets cost JD 12 in addition to your Petra admission ticket. You must book in advance – even just a couple of hours ahead is fine – either through your hotel or directly with a local tour company, such as Petra Moon.The walk has become so popular that it’s not uncommon to have 150 or 200 people setting out together. The best advice in these circumstances is to linger at the very back of the crowd: that way, you avoid most of the chatter on the way down and will be walking through the Siq more or less in lonesome silence, under the moon and stars. Reference- Rough Guide

Nothing had prepared me for the incredible beauty of Petra and I would not have believed it existed until I saw it myself. We got duped by the usual “free horse” scamsters at the Siq and it turned out later that they were neither free nor cheap.

TRAVEL TIP – There is a strong scam which riddles Petra and is usually operated by some bedouin residents of the wadi. You will be offered “free” horses, camel and horse buggy rides and they charge exorbitantly for the guiding in form of an aggressive demand of baksheesh. There is a small hike up to the Siq and it is best to start early to avoid the open desert sun.

We reached the Siq and immediately got lost in an incredible tunnel of red. The rose red sandstone canyon of Petra is called the Siq and was simply stunning. An UNESCO World Heritage Site, the fabled “rose red city, half as old as time”, Petra is a well known ancient Nabataean city and is deemed as “one of the places to see before you die”. And Lou and I were in rose red Petra, reliving time together.

Took us to Petra

It started on a bad note

Until we reached the Siq