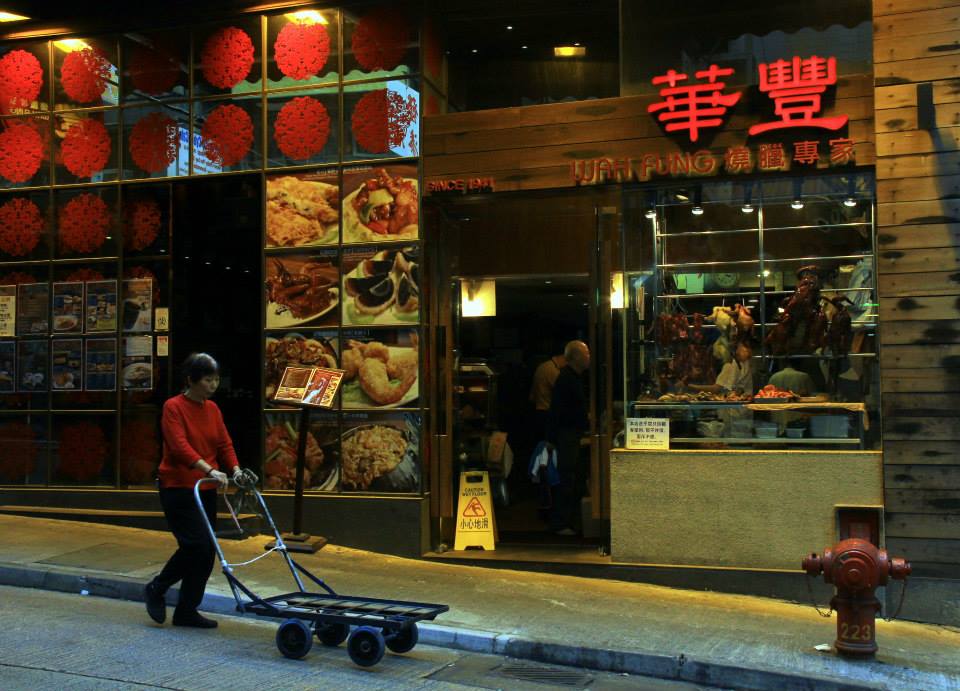 I took a tram from the front of my hotel to visit the famous Central District of HK. Central District is the political, administrative and financial hub of HK and has some fantastic skyscrapers and Victoria Peak.Central is located on the north shore of HongKong Island, across Victoria Harbour and the area of Chong Wan was officially named Central in English in early 1980.It  was one of the districts in Victoria City(often said to be the capital of HongKong) and was one of the first urban settlements post British colonization in 1842.

The tram trundled down Des Voeux Road Central and immediately I got transported to worldly HK. There were tramlines snaking along the entire stretch and from my quaint seat,I watched HK glitter by.Highrises held banks,money changers,jewelers,boutiques,swanky restaurants and everything which smelled of money. Constructed as part of an early 1800s land reclamation project,Des Voeux Road itself is as artificial as it gets. HK sashayed down at an incredible speed there and its global fashionable residents danced to its materialistic tunes in a frenzy.I thanked God for my initial days of vintage HK,before getting swallowed by her lofty glamour.It was hard to believe that on the parallel Des Voeux Roast West life existed in a totally different plane.The tram trundled to a stop in front of the Statue Square and I tumbled out in the breezy sunshine.

TRAVEL TIP-Although spring(March-May) and Autumn(September-November) are the best time to visit HongKong,winter is not too bad either.Its mostly sunny and cool except for a few patches of occasional cold fronts.It does tend to get a bit cold as temperature often drops below 10 degrees Celsius,so packing a few smart woolens make sense.

The Statue Square once held a statue of Queen Victoria, which has long been moved to the Victoria Park in Causeway Bay. The biggest draw of Statue Square happens on weekends when hundreds of Filipino housemaids, nannies, and waitresses(who work in the SAR to send money back home) descend there to meet friends,relax on blankets on pavements,share news,letters,photos,gossip and food.On their day off they bring life and vitality to the serious business district with their laughter and chatter.Homesick,overworked and often mistreated,they infuse a beautiful human touch to a place where time and people can be bought with money.

The only statue remaining in Statue Square today is of Sir Thomas Jackson,the former manager of the Hongkong and Shanghai Bank (HSBC). The legendary banker stands there happily,feeling at home right in the middle of the money machine of HK. The historic Legislative Council Building was bang opposite and there HK Central seemed to have fallen into a time pocket.Against the skyline of glittering new HK,its late Victorian colonial architecture brought nostalgic memories of another era. Constructed from pink and gray granite it is a delightful mix of Greek pillars with a Chinese roof. A stone statue representing goddess of justice holding scales decorates the main portico and the building hosts two flags-one with the red star emblem of China and the other with the bauhinia flower of Hong Kong.

I crossed the street and went over to the legendary HSBC building.Situated at 1 Queen’s Road,Central,the former Hongkong and Shanghai Banking Corporation is the epitome of HK’s wealth and power in the financial world.It is Hong Kong’s largest bank,maintaining several offices around the world.The bank has been at this spot since 1865, and issued the colony’s first bank notes in 1881 from there.Designed in the mid-1980s by renowned British architect Sir Norman Foster it was reputedly one of the most expensive buildings in the world at that time (almost US$1 billion) and is a cornucopia of grand open ground plaza,web of escalators and dark scowling suits.Made of aluminum,glass and lots of light it was a dazzling display of wealth and power.In spite of being surrounded by this beauty and power the two bronze lions which have been “guarding” the bank since 1935 and the expensively attired employees seemed to be frozen in constant serious scowl.

Chain smoking,rushing and hooked on to their device they reminded me of the popular song”Price Tag” by Jessie J.I crossed over and walked up the tree shaded Battery Path.It was cool,peaceful and again a strange contrast right next to the busy financial whirl.I watched HK from my vantage point and it felt great to be a visitor there(not a resident).Traffic,tourists,bankers choked the narrow street and mingled with frenzied shoppers downtown.The skyscrapers filled the sky and even the horizon glittered with them.The Bank of China tower rose proudly and sparkled in its beautiful crisscross pattern reminiscent of bamboo.

I paused for a break in front of the yolk yellow St John’s Cathedral.Inaugurated in 1849 it is the oldest ecclesiastical building in Hong Kong and was used for Japanese social functions during the Japanese occupation. Although extensively renovated after World War II, it was still the most quaint place I visited in the heart of busy HK. The shady ground provided a quiet break and the ceiling fans whirring slowly inside the diminutive church reminisced of forgotten tropical love stories.Since Christmas was around the corner,it was decorated like a bride and hummed with activity.

Hunger made its presence felt in embarrassingly loud ways and I scampered down in search of lunch.I paused briefly by the Court of Final Appeal,which looked delightfully quaint and empty and hunted for an authentic hot pot restaurant.Hot pot and HongKong go hand in hand and if in HK,it is a sin for food lovers to give it a miss.

While the Chinese hot pot history spans for more than 1,000 years,it probably originated in Mongolia where the main ingredient was meat, usually beef, mutton or horse. It then spread to southern China and and in time, regional variations developed with different ingredients such as seafood. A good hotpot is made from a variety of ingredients such as beef, lamb, pork, chicken, and other meats, vegetables and/or seafood.

A stock or soup is brought to the boil on a suitable pot and then prepared raw ingredients are added to it. The hot pot is allowed to simmer until the meat or fish and vegetables are thoroughly cooked before adding vegetables,tofu and noodles in it. The soup of the hot pot renders it unique taste and thus a variety of choices are available. The Sichuan hot pot is the most spiciest and most popular in China,the Japanese version shabu shabu is quite bland..

Hotpot is an ideal winter food, as it is deliciously heartwarming and Hong Kong has quite a few good hot pot restaurants.It was Christmas time and I was in HongKong.So a hotpot was called for and I had mine at Hei Yuet Hotpot Seafood Restaurant.As the steam of the hot pot rose and the aroma of cooked soup filled my HongKong experience deliciously.I sat back and enjoyed the steamy side of delicious HongKong.

Central was the glittering side of HongKong

Home of the rich and powerful

And its guardian a break

And court of Final Appeal behind

For the quaint charm

It was a perfect place to escape the dazzle

And I happily gave into a HK hotpot