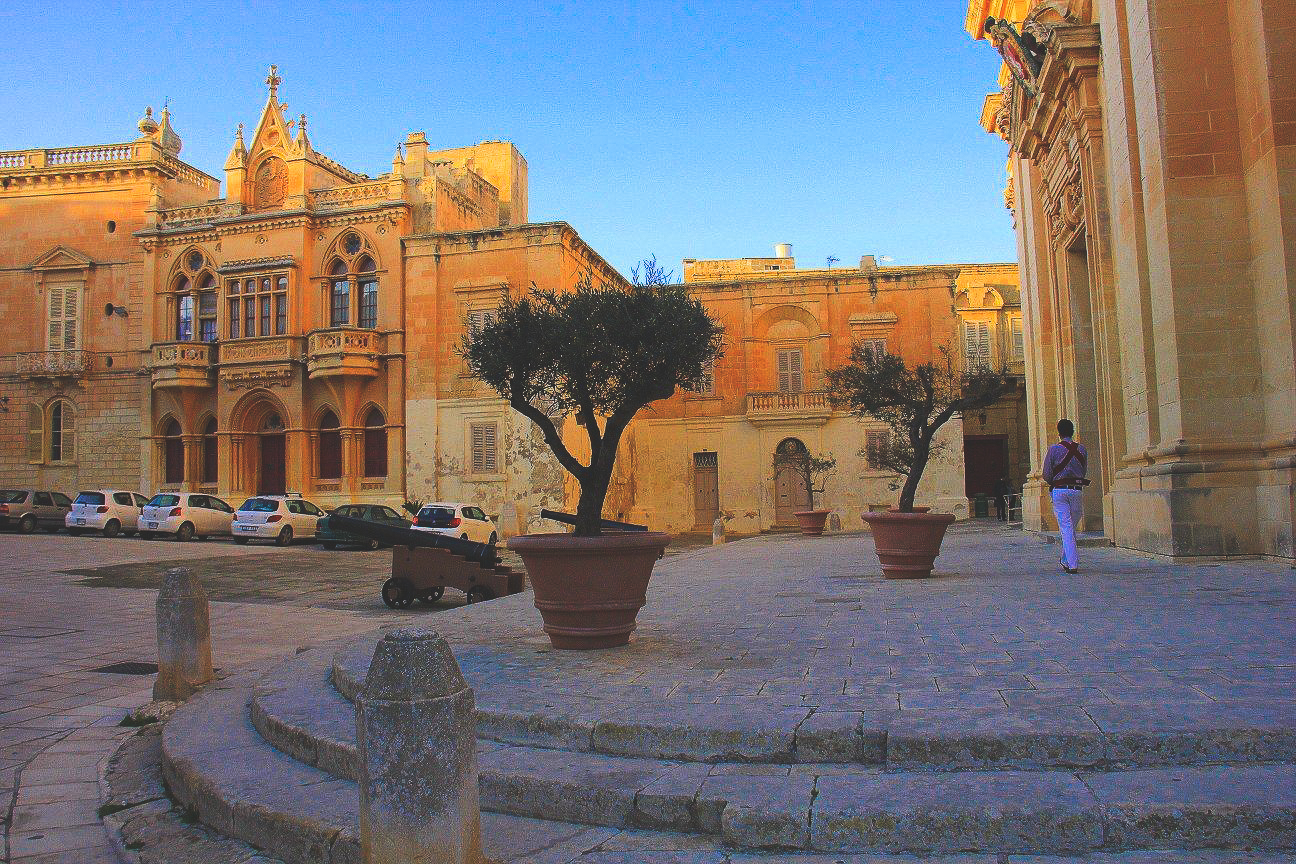 The Silent City of Mdina

Mdina in Malta was astonishingly beautiful. We were there just before sunset when a beautiful golden light bathed the medieval fortified city. Tarek calls it the golden hour and it is our favourite photography time of the day. Unfortunately, the golden hour created a checkerboard of shadows in Mdina, making us difficult to take pictures and we were mostly content with drinking in the resplendent beauty of the city with our hungry eyes. Mdina’s signature narrow cobbled streets seemed to be shrouded in mystery and a gorgeous array of baroque and medieval architecture lined its winding lanes. Magnificent palaces pierced the golden sunset sky, as wonderfully preserved churches turned the fortified city into an outdoor museum.

It was an extremely majestic city, one which seemed to be built to impress and humble its visitors. Needless to say, Mdina was Malta’s old capital before Valletta took over the title and it was known by various names under different rulers over a period of 4,000 years of its existence. It was originally called Malet meaning ‘place of shelter’ by the Phoenicians, and the Romans, who built a large town here, named it Melita. The city’s present name is of Arabic origin, with medina meaning “a walled town”. Incidentally, it was the Arabs who fortified Mdina (pronounced im-dee-na) and built a deep moat around the city and its suburban Rabat. During the medieval times, such were the grandeur and importance of Mdina, that it came to be called the Cittá Notabile or the Noble City. The Maltese aristocracy favoured the beautiful city and it was the seat of the universitá (governing council). The sea-based force Knights of St John of Malta, however, preferred the proximity of the Grand Harbour, and Valletta became their center of activity.

A fortified medieval city of Malta

With Valletta taking over the helm of Malta, Mdina gradually retreated into being a holiday destination for the rich and till today, has proudly preserved its medieval aristocratic ambiance to the hilt. The beauty of Mdina starts with the arching city gate and the moat (albeit now dry) immediately transports you to a place in history when the ancient Maltese knights galloped by in a determined file. The first thing that struck us about Mdina was its lovely limestone architecture. The golden hour deepened the saffron hues of the buildings and it felt like getting dipped into a jar of clear warm honey. The high walls sheltered old cobbled stone lanes along which grand building doorways, colourful wooden window shutters, and delicate Maltese balconies stood in photogenic rows. Shadows played hide and seek with the patches of sunshine and vivid-hued bougainvillea flowers grew in splashes of bold clusters. The whole effect was entrancing, to say the least, and it became magical when the sun dipped below the horizon. A deep blush spread colouring Mdina in rose gold and church bells announced the time of prayer.

The colour of Mdina at sunset is rose gold

Slowly, the street lights lit up in a row making Mdina seem more mysterious and strangely sacred. Pools of golden light dimly lit up the winding lanes, which according to the local legends were built that way so that the attacking archers could not shoot straight at their targets. It was right then, that the unique feature of Mdina, struck us with a force, for the city was uncannily silent. While the prohibition of vehicular traffic of the outsiders within the city, made the silence seem reasonable, in reality, Mdina was actually pin drop silent. The only sounds during our walk came from our own footsteps and sometimes hushed whispers or the faint laughter of some other visitor floated in through the air. The disembodied voices made the whole experience of Mdina after dark, even more fantastic, and we fell headlong in love with The Silent City of Mdina.

And Mdina is indeed uncannily silent

Incidentally, Mdina is referred to as the Silent City and anyone who has explored it after dark will vouch by the appropriate nickname. There is a quiet timeless aura about Mdina, which makes the city seem beautifully frozen in time. The chiseled yellow architecture is so grand that it is borderline pure in form and at night Mdina is truly like a time machine. Perhaps it is Mdina’s 3000 years + of history or the fact that the city is intrinsically connected with Maltese Christianity, which makes the city seem palpably sacred. It is believed that the apostle St. Paul had stayed at Mdina after being shipwrecked on the island. Though he had lived inside a grotto known as  Fuori le Mura (outside the city walls) now known as St. Paul’s Grotto in Rabat, he had rubbed off some of his mystical aura on Mdina.

Mdina is called The Silent City

Tarek and I loved Mdina, which is on the UNESCO World Heritage Site (tentative) list. We stayed there long past sunset, sitting on the city bastions and watching Mdina and the surrounding countryside get draped in darkness. The views of the Maltese countryside from there were outstanding and after dark, the city lights twinkled like solitary ships. The quietness of The Silent City was cotton wool comfortable and, we both agreed that Mdina was one of the most fascinating places we have ever visited. Perched on top of a plateau, this fortified medieval oozed luxury and nobility, by staying frozen in a time of elegance and timeless beauty. Whether brilliantly honey-hued during daytime or lamp-lit by night, the Silent City of Mdina is a fantastic destination in Malta.

Mdina entrance is one of the ‘Game of Thrones” location

How to get there

The main attractions of Mdina

The best time to take photos of Mdina is either in the early morning or late afternoon when the sunlight is not too harsh against the limestone walls. Visit the bastion look-out post at sunset for excellent views of Rabat, Id-Dwejra, and Mosta. And don’t forget to walk through the Silent City at night.

Located on a hilly perch,

The fortified city of Mdina

Is truly a City of the Nobles.

Settled by the earliest Phoenicians,

Mdina passed through many rulers,

And was the center of learning,

This fortified city has also been a hotbed

Until the Knights of Malta

Ever since Mdina has slipped into

Obscurity and lives through tourism,

As The Silent City of Malta.