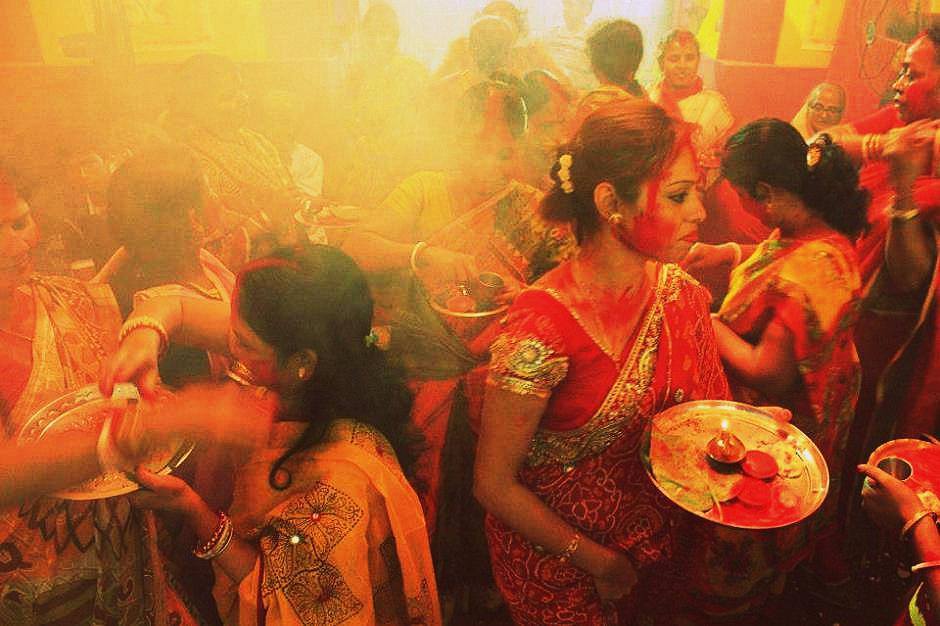 Top fun things to do in Kolkata

My posts on Calcutta are definitely not comprehensive enough as a guide, but are fondest memories of a place called home. However to present Calcutta’s unique specialties and quirks as a guide, I have listed down a few fun things to do in the city.

1. Celebrate the Durga Puja – No Calcutta topic can be complete without a mention of its grand Durga Puja festival, its mouth watering deserts and its endearingly sweet words like “dada” (brother), “didi” (sister), “adda” (gossip) etc. Held every year in autumn (Oct/Nov), Durga Puja is equivalent to the Navratri festival, which is celebrated throughout the rest of India at that time. The entire city and state deck up with lights, larger than life temporary pandals (decorative tents) and idols of the 10 armed Goddess Durga and her entourage fill nearly every lane. The festival goes on for approximately 5 days, the last day culminating in the photogenic sindoor khela (playing with bridal vermilion), Dhunuchi naach (dance with pots of fragrant smoking coconut husks accompanied with rhythmic drum beats of dhaak) and immersion of the idol. Pandal hopping is one of the must do things in Calcutta during Durga Puja and the dazzle and magnitude of the celebrations are jaw dropping.

2. Indulge in some delicious food – Since Calcutta and good food are synonymous, I have tried listing down some of Calcutta’s unmissable cheap culinary experiences. Although the street food is for the strong gutted, phucka, rolls, momos, cutlets, kobirajis, fish/chicken fingers, jhal muri and telebhaja are not to be missed by any foodie. Calcutta streets especially around Dalhousie toss up some mean noodles (both vegetarian and non vegetarian) and although not most hygienically made, they are super delicious and pocket friendly. Shingara (samosa/ deep fried rectangular pockets stuffed with spiced vegetables), luchi alur dom or cholar dal (fried corn bread served with spiced baby potatoes or bengal gram dal with chunks of coconut), kachoris (traditional asafoetida flavoured north Indian deep fried spiced snacks) etc are some of Kolkata’s wholesome snacks and these are easily found at nearly every sweet sellers shop in the city. Calcutta’s sweet shops double up as snacks centers and they serve only vegetarian finger food. Apart from the street food galore, there are countless Bengali restaurants in the city and the super delicious daab chingri (prawns cooked inside tender coconut), Chingri Macher Malaikari (prawns cooked in creamy coconut sauce), different fish preparations and interesting vegetarian dishes make them worthwhile trials.

3. You can never go wrong with Kolkata’s food fixtures – Calcutta is a huge hodgepodge of too many people, cultures and communities and each have left their mark on the city’s foodscape. The Muslim culinary influence can be keenly felt in the biriyanis served by the city eateries, the most famous ones being Shiraz, Arsalan, Zeeshan etc. Fragrant and light Calcutta biryanis are very different from the ones served anywhere else in the country and they come with the signature boiled egg and baked potato. Mughlai cuisine can be enjoyed at nearly every restaurant of Kolkata, but the best ones can be found at small shops in and around New Market. The huge sprawling market and its adjoining lanes like Sudder Street and Freeschool Street have some excellent Bangladeshi restaurants too which have been serving big platters of authentic pocket friendly Bangal food (and great fried chicken) for ages.

The north, east and central Calcutta too have their own share of awesome grub and the legendary Indian Chinese at Tangra, especially the pink tipped prawn chips are to die for. The quasi authentic Chinese breakfast at Tiretti Bazaar, super succulent momos at Rabindra sadan Tibetan eateries, pork dishes at Sikikim House near Camac Street and kosha mangsho (dry spiced mutton) of Golbari, Shyambazar (and now near Freeschool Street) are just a few of the city’s delicious culinary stars. Dhabas or originally simple truck drivers pit stops are also famous food fixtures of Kolkata and Balwant Singh Dhaba serves awesome North Indian dishes.

4. Try out some of India’s most famous sweets – Sweets of Calcutta are legendary and the most famous ones are rossogolla (spongy, syrupy, sweet cheese balls), mishti doi (delicious, creamy sweet flavoured yogurt) and sandesh (drier cottage cheese based sweets). While rossogolla is reputedly hijacked from neighbouring Odisha, sandesh, mishti doi etc are absolutely authentically Bengali. A few sweets bear interesting British legacies, the most famous of them being Lady Kenny.

5. Liven up evenings at Park Street – The lively Park Street deserves a separate mention and its food and entertainment history is legendary. Cabaret performances and exciting night life have made their presence felt in the lively taverns of Park Street since the 40s, 50s and 60s and Calcutta is a city which loves to party. It is always game for good music, food and parties and Someplace Else, at the Park Hotel sees awesome live music performances on every Saturday evening. Mocambo (deviled crabs), Oly Pub (steaks and cheap beer), Peter Cat (liver fries, Chelo Kebab and liveried waiting staff) and Trincas are legendary for their food and entertainment and many renowned musicians of India have started off as performers at these iconic places. Dance bars are an unfortunate part of Calcutta’s entertainment scene as well and these seedy cubby holes are scattered all around Esplanade and New Market area.

6. Experience one of India’s liveliest Christmas celebrations – Christmas in Calcutta is celebrated with much fervour and gaiety and the city gears up beautifully with hundreds of lights. Yuletide logs, rum and fruit cakes, turkey specialties etc take the city by storm and serpentine queues wait patiently at the oh so proper Flurys tea room for their share of Christmas goodies. Though many parts of Kolkata glitter on Christmas until New Year, it is the quaint residential pocket of Bow Barracks which is the city’s prime festive location. Inhabited by a friendly cluster of Anglo Indian families, Bow Barracks beams up with thousands of smiles, carnival like spirit and lights for Christmas. A very photogenic experience, Santa arrives at the Christmas party there on a rickshaw and hands out goodies to the lesser privileged children of the area.

7. Relax at India’s legendary tea room – Flurys with its unique shocking pink signage is legendary and it is perhaps the oldest, still surviving tea room in India. Its scones, cucumber sandwiches and afternoon tea are absolutely like a walk down the British era and Flurys attracts leisure seekers, who love to enjoy its old school charm, in hordes. Founded in 1927 by Mr and Mrs J Flurys, this tea room at Park Street represent fine European traditional confections and Calcuttans have been flocking there through generations for its authentic Swiss and International delicacies. Reputed for serving the prosperous Britisher and the affluent Indian alike, Flurys became famous for its exotic cakes, creamy pastries, rich puddings and perhaps the best Swiss chocolates outside the European continent.

8. Watch a cricket match at Eden Gardens – The beautiful cricket ground of Eden Garden is a legend in its own right and it is acknowledged as “one of the most iconic cricket stadiums in the world”. Watching an exciting game of cricket at Eden Garden is an unforgettable experience for the lovers of the game and a  cricket crazy Aussie friend of mine had actually traveled to India all the way from Melbourne to enjoy a crackling India-Pakistan match there. However not many are aware of the lovely, nearly hidden park which is tucked away behind the colossal ground and is the original Eden Garden.

9. Take in some iconic Calcutta sights and experiences – Apart from taking in the sights and sounds of a time warped metropolis through various walks organized in the city, the National Museum, St Paul’s Cathedral, Victoria Memorial and the adjoining Race Course, controversial Mother House etc are a few places which provide different aspects and shades of Calcutta. A tram ride through leafy Maidan, especially around Fort William area is very romantic and so is an evening boat ride down the Hooghly. A pretty promenade now borders the river and many ghats line the area. It specially comes alive at sunsets with families, lovers, street food sellers and youngsters flocking the area for some fresh air. Although the loveliest, it is not the only refreshing spot of Calcutta and the city now has a few spruced up parks and gardens dotting its landscape. The Citizen park, Millenium Park and one of world’s most historically important herbariums, the Indian Botanical Garden (famous for the widest 250 years old banyan tree) make lovely places to catch a breather and the evening buggy ride in and around Victoria Memorial is pretty interesting too.

Photography lovers can choose between idol making at Kumartoli or the Mallickbazar flowe market. Take a break from book hunting at College Street with adda (gossip), bad coffee and lazing away time at Indian Coffee House and scond books are also sold at Gariahat. Opt for one of the organized city walks to discover Kolkata’s history, heritage, traditional or bonedi Bengali homes etc. For those seeking religious salvation, the horrendously crowded Kalighat and the lovely Dakshineshwar temples make perfect day trips and while Kalighat can be really trying on the nerves, an evening at Dakshineshwar is quite pleasant. Come winter the city hosts some very interesting festivals and the Calcutta Book Fair, Sufi music festival in the park, Handicrafts Mela, flower shows, dog shows etc are some of the biggest crowd pullers.

10. Shop till you drop – Kolkata is a great place for cool bargains and street vendors, local designers and beautiful hand loom culture make it a shopper’s paradise. While New Market is the most popular one stop destination for most shopping needs, the best buys are usually found at Dakshinapan Shopping Complex, Gariahat and small local designer outlets. Jamdani, taant, kantha stitch, Darjeeling tea etc are the city’s pride and New Market has some nice silver jewelery stores. Souvenir hunters may like the Bankura terracotta horses, shola pith decorative idols, Chau masks etc. Numerous seasonal fairs held in Kolkata are also great place for shopping and the city surprises its visitors with its gorgeous array of handicrafts.

A lot of people complain about Calcutta’s lack of things to do and while it is a difficult city to love at first sight, the erstwhile British capital is equally hard to leave. People make this city thrive and as long as its free bohemian spirit remains alive, Calcutta will never have a problem in garnering admirers. This is a love story, a wistful longing, an ode to home, a beautiful, unfortunate city called Calcutta.

Circled me one afternoon

And brought back memories

In a maddening rush

Calcutta is all about

And its signature nuances

Modern at the same time

Let me take you