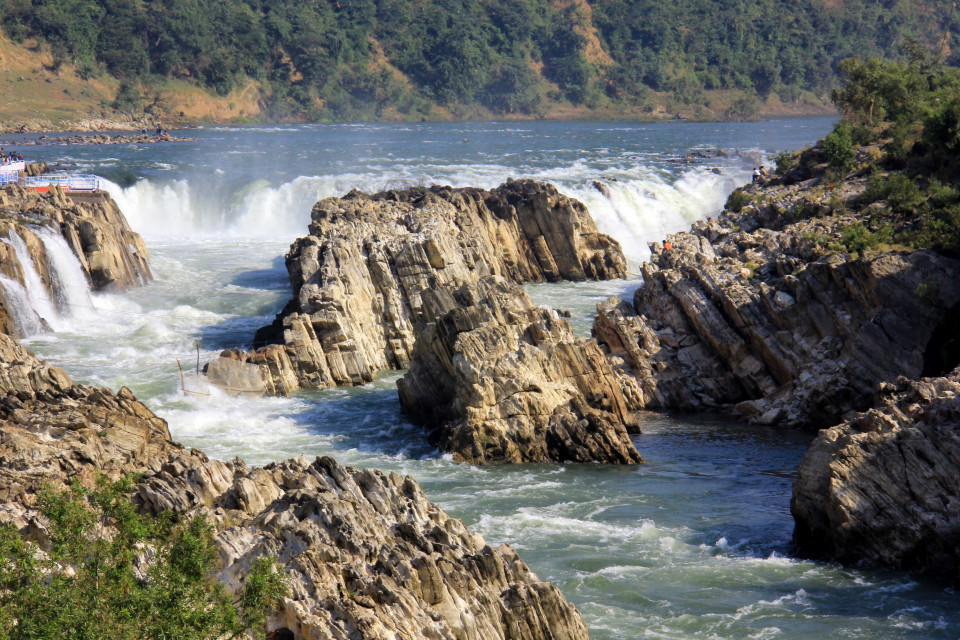 The beating heart of India, Madhya Pradesh or MP is my favourite state. Strewn with gorgeous ruins, deep jungles, thundering waterfalls and really intrepid villages, it is quintessentially incredible India. Archaeologically the rich land of MP is many centuries old and its Bimbetka caves have vivid remnants of prehistoric paintings. Many religions have left their marks on its culturescape and nature has blessed it with abundance. I have always thought that some of the nicest spots of India have been crammed into MP and luckily I have managed to visit the state thrice. My first MP visit had been as a toddler and later, 2 trips as a solo woman traveler have helped me enjoy its beauty.

Bhedaghat had been awesome

My 2nd visit had been pretty extensive and I had rambled around Khajuraho and it’s gorgeous periphery. The neighbouring state of Uttar Pradesh too had been dabbled with on that trip and I had both the luxuries of time and money on my hand. Thus,  Khajuraho, Orcha, Panna, Gwalior, Mandu, Chanderi, Panchmarhi and Jhansi had been on my list and I had had a very good time. While Khajuraho’s famous sex temples have bamboozled me, Orcha had been soothing and Pann’a golden forests have revealed the true beauty of the state. The intrepid Ken Sanctuary had been a beautiful find and missing out on tiger spotting on that one, had called for a 3rd trip soon.

It had been designed to focus only on Bandhavgarh National Park and time constraint had allowed me only 3 meager days. Incidentally, 1 out of the 3 days had been required to be based in the launchpad city of Jabbalpore and it had been the only productive day of that entire visit. I had cracked my ankle hideously on the very same night and had returned home with the promise to come back to my beloved Madhya Pradesh soon. Although, my return is still awaited, beautiful memories of that day had whetted my lust for this unique central state forever.

Narmada had been dramatic

And her smoky beauty

Had left me dumbfounded

Madhya Pradesh promises surprises like no other place and this large hearted state of mellifluous soft spoken Bundelkhandi people, hides her intrepid varied charms well. Thus, though not, completely neglected, travelers do not often trickle beyond MP’s well trodden spots and many of its best sites continue to remain offbeat. While this does not always mean quiet, solitude or hard to access places, MP’s offbeat destinations are somehow not much talked or written about. Bhedaghat and Marble Rocks have been 2 such places which had featured on my last trip and I had never heard of them before. They have been discovered on a long train ride from Kolkata to Jabbalpore on a discarded MP state tourism brochure and glowing words describing both the places had piqued my interest. However, by the time Jabbalpore had arrived, Bandhavgarh’s feline anticipation had banished them from my thoughts.

The city of Jabbalpore had been difficult to love and I had not liked it’s provincial lack of character. The Hotel Rupali, where I had stayed, despite being one of the best in the city, had sent me on an OCD overdrive and my “super deluxe” room’s garish bedstead, sickly pink curtains and strange light fixtures had made me imagine a hundred hidden cameras. The room, despite being comfortable and ambitiously luxurious had resembled a set of some sleazy movie and rest had been impossible to achieve there. So, after a quick lunch of its famous Bengali fish curry, I escaped clutching the brochure in my hand.

It had attracted interesting characters

And a mini bazaar had made

Outside, belching toxic smoke and cacophony of vehicles had made me hail the first autorickshaw available and it had been the best decision of the day. The young driver had been a soft spoken mild mannered college kid who knew a smattering of English and after the customary bargaining, had taken me around Jabbalpore’s famous spots at a nominal price. Thus, Bhedaghat and Marble Rocks had popped up on my itinerary like a “Jack in the Box” toy and it had been an experience which we Indians conclude best as, “meant to be” or “Hona hi Tha”. I don’t remember much of the drive except that guavas had been fruiting at that time and the broken road had been dotted with baskets spilling over with luscious green globes.

Plenty of heavy trucks had thundered past us and we had scuttled between them like a hapless beetle over massive crater like potholes. Somewhere on the way, I had sampled Jabbalpore’s famous Khoye ki Jalebi and had found it to be too sweet to be delectable. Bhedaghat had arrived without much fanfare and it had been a good day trip from Jabbalpore. Located around 25 kilometers from the city, Bhedaghat consisted of a neat little triangle of interesting spots such as Dhuandhar Falls, Marble Rocks canyon and Chausanth Yogini temple and had the reputation to be crowded on weekends.

I had heard the Dhuandhar Falls even before the cascading sheets had arrived and its thundering roar had seemed like a loud murmur. The sound had overpowered the surrounding traffic noises and the waterfalls had been a stunning sight to behold. The name Dhuandhar literally means “Flow of Smoke” and the milky cascades had resembled exactly that. It had been caused by the Narmada River turbulently plunging down a narrow gorge and the effect had been dramatic. Narmada, which is considered to be a holy river in India is usually placid and she had flown with a glassy quietness, until nature had made her unleash fury in form of Dhuandhar Falls. I had watched its spectacle from behind the safety of the guard rails and a precarious rope way had dangled over the mighty falls.

It had been quintessential

It had been a hot day, with a blazing sun baking the Bundelkhandi red earth and Dhuandhar’s refreshing mists had sprayed on my face nicely. Rebounding splash had risen like fine veils of mists from the bottom of the milky white plunge pool and black outcrops of rocks had glistened haplessly in midst of the whirling waters. The sight had been truly breathtaking and being quite popular with local tourists, a mini bazaar had sprung at the spot. It had been quite festive and college students, day trippers’ families, rural folks on breaks had lent the small bazaar a carnival like charm. A curious mix of interesting characters had flowed in and out of the crowd and they had come from all walks of life and ages. Occasionally, a few out of state tourist too had featured among them and their different languages had stood apart from the sweet Bundelkhandi lilt.

Saffron plastered holy men, rural Bundelkhandi ladies with proud corpulent faces, young blushing college lovers, stray dogs, coconut and trinket sellers had bustled around colourfully and beautifully carved soapstone artifacts had stood out from among the cheap glitzy souvenirs. MP is blessed with numerous mines and many variety of stones form its contours. Narmada’s soapstone had nurtured the centuries old tradition of carvers and it had been one art which had thankfully still boomed. I had loved being there, standing out like a sore thumb in my metro garbs and designer sunglasses, but they had been a bunch of non intrusive folks who had been too busy having a good time. It had felt great to see their happiness, hear their squeals of laughter and nature’ beauty had taken care of the rest of the enjoyment.

Had charmed me less

Having no immediate intention of returning to my horrid hotel, I had relaxed by the banks of angry Narmada and time had slipped by unnoticed. Mounds of freshly plucked spiced, tarty berries had attracted my attention and I had bought a handful, while shopping for soapstone figures. It had been a lazy day and Madhya Pradesh had charmed me with her laidback ways. After leaving Dhuandhar Falls, I had given the Chausanth Yogini temple amiss and had headed straight upriver to experience the famous beauty of the Marble Rocks. Known to be particularly alluring on moonlit nights, glittering magnesium limestone cliffs had created a curvaceous gorge on the holy Narmada and the rocks had supposedly change colour with light. The sheer rugged cliffs which had dazzled golden white during the day, had sometimes donned softer shades of pink at sunsets and dim nights had made them glitter hard black. I had found the Marble Rocks to be less endearing than the Dhuandhar Falls and after a short boat ride from the Panchavati Ghats, had been ready to leave.

The gorge was beautiful

The liveliness of Dhuandhar Falls

The boat ride had been shared with a loud brash family on vacation, whose endless chatter had marred much of the fun. Moreover, young boys plunging into the river from both sides of the cliffs for money had made matters worse. They had clung to the sides of the boats until the revelers had been forced to shell out pennies and somewhere in the midst of all the commotion, Marble Rocks had slipped away quietly. The sight however, had been undeniably impressive and the once again placid Narmada had been beautiful. Lying like a sheet of molten silver, she had impressively mirrored the towering cliffs on both sides and I had fallen in love with lovely river all over again. It had been a very good day, something that my first impression of Jabbalpore had belied and I had lingered by the river until dusk. The ride back to the city in the dark had been a foolhardy decision, one which had ended up with a road accident and broken ankle.

While, I had felt awfully cheated by fate that day, remembering those Narmada moments now only bring back beautiful memories. Life is a mixed bag and it had been a bittersweet day, one which had gifted me both breathtaking moments and a scarred ankle.

For those who are intrigued by Madhya Pradesh, can check out the amazing explorations of the travel blogger who writes at Beyondlust. The blog’s MP series is one of the best I have come across and I am a huge fan of Hinglajgarh post and others. Himangshu of Everything Candid has also published a fantastic post on Bhedaghat and for travel details and awesome photos click here. It is a feast for the eyes.