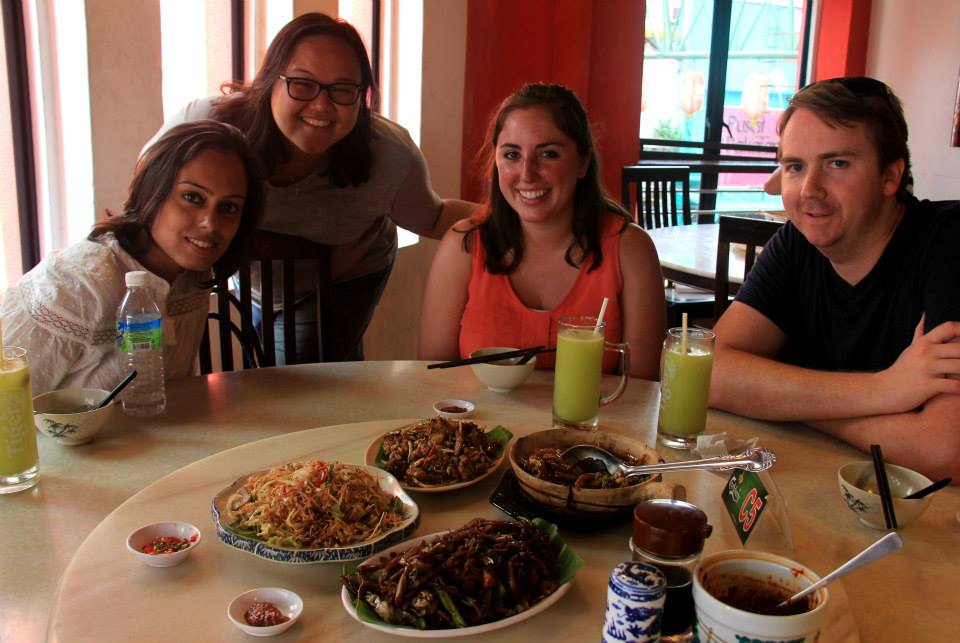 2015 has been all about food for me. I have eaten my way through all the places that I have visited and the cuisine has been most diverse. So presenting, a very mouthwatering 2015, the fantastic year on my plate.

1. Khmer pepper crab –  The highlight of this dish are the famous Kampot pepper. Their sweet, sharp taste made the dish come alive and the secret had been in the precious green pearls which burst with flavour. A newly reinvented spice, Kampot pepper is the hottest trend in the culinary world.

Khmer pepper crabs are a must try in Cambodia.

2. Sliced baby octopus with fiery salsa sauce – My ultimate favourite had been this farm to table initiative. We had prepared this at an impromptu cooking class on our Rhine Valley picnic day and it had been the perfect exotic soul food.

This blue dished darling had been a farm to table initiative, the first one of 2015.

3. Num Pang – This delicious cheapie is known Num Pang, which is the Cambodian name for “sandwich.” Similar to the Vietnamese sandwich bahn mi, it is meat, pickled vegetables, and cilantro packed in a freshly baked French baguette. Add some slices of exotic fresh fruits on the side and you have one of Cambodia’s favourite snack.

I have eaten Num Pang for every breakfast during my entire stay in Cambodia.

4. Noodle Soup – The light, mild flavoured rice noodle soup with meat is my breakfast staple. With some lemon slice, chopped chilies and crushed peanuts, this light homey soup is soul food and my favourite too. Variants of this noodle soup is consumed in every South East Asian country throughout the day, especially breakfast.

This light noodle soup breakfast is best combined with Vietnamese coffee and streets of Hanoi.

This delicious desert had come with a killer name.

6. Currywurst – Spicy, strange and sinfully unhealthy Currywurst is the newest food fad in Europe. Topped with spicy curry powder, generous splash of ketchup, sliced German sausages and side order of fries, they are served best at Currywurst and Pommes.

These have been my secret everyday snacks.

7. Lahpet Thoke – Lahpet, stands for “green tea”, and thoke, means “salad”. Lahpet Thoke is a curious combination of soft, pickled tea leaves, crisp, roasted peanuts and other crunchy beans, toasted sesame seeds, fried garlic and dried shrimp and chopped tomato are optional. Served neatly in a platter with all ingredients in separate piles, guests toss up the mix according to their preference. I had literally lived on them along with Shan Noodle only to later find out that excess of Lahpet Thoke makes your stomach run.

This irresistible one had nearly ruined my Myanmer visit.

8. Chicken Liver Adobo – Philippines is an Adobo country and I am crazy about this dish. Although the dish is of Spanish origin, Philippino Adobo has an indigenous cooking method. Even before the Spanish colonization of Philippines, Filipinos cooked their food by their steaming, roasting or boiling. With time, the Chinese traders had introduced soya sauce to them and when the Spanish had colonized Philippines in the late 16th century, they had found a cooking style which had involved stewing the meat with vinegar or Adobo, which eventually gave birth to the most famous dish (or method) of Philippines.

Filipinos can make adobos out of everything and with a result as good as that, I am not complaining.

9. Stir fries and Seafood of Thailand

And fresh seafood are Thailand must haves.

10. Noodle Doodles – This year has been South East Asia heavy and I must have eaten a lifetime of noodles. My favourites have been Mee Goreng and Pad Thai and I can never go wrong with them.  While Mee Goreng is a spicy fried noodle dish, made with thin yellow noodles, fried meat or seafood, Chinese cabbage shreds etc, Pad Thai is more runny, fresh and lightly cooked. Mee Goreng has made my dinners in Singapore, Indonesia, Malaysia etc and the soaked dried rice noodle dish of Thailand had consisted of my soul eats.

You can never go wrong with Mee Goreng

11. Vada – This year I have spent a substantial amount of time in India and my breakfasts at home never vary from a plate of twin vadas. Crunchy, deepfried and savoury, I love vadas when they are medu and served with creamy thick coconut chutney.

These golden delights are my perennial breakfast staple in India.

12. Mughlai Paratha and other Kolkata delights – Kolkata has surprised me this year and I have enjoyed its quirky mix and match kind of cuisine to the fullest. My favourite had been the Mughlai Paratha, a very popular city street food. Served in the evenings as snacks, these soft fried bread wraps are filled with stuffing of spicy minced meat, egg, onions and pepper. Gol Bari’s Kosha Mangsho had made me run all the way to the other side of the city and it had been a dish worth the hassle.

13. Jaanbai’s cocktails – Most of Cambodia’s tipples are inspired by their local fruits and Jaanbai excels in creating wonders with them. I have lingered longer in Battambang just for Jaanbai’s cocktails and they have been worth the stay. Their star creation, the dragonfruit caipirinha looks as good as it tastes. The freshness of the fruit brings a local exotic twist to the Brazilian concoction and its subtle flavour is enhanced by the tangy lime and vodka. Jaanbai being a social enterprise, had managed to make me feel less guilty about my piling kilos and decreasing wallet and then Battambang, too had been too hard to leave. Being good has never been so much fun.

The star had been Jaanbai’s dragonfruit celebration of vodka.