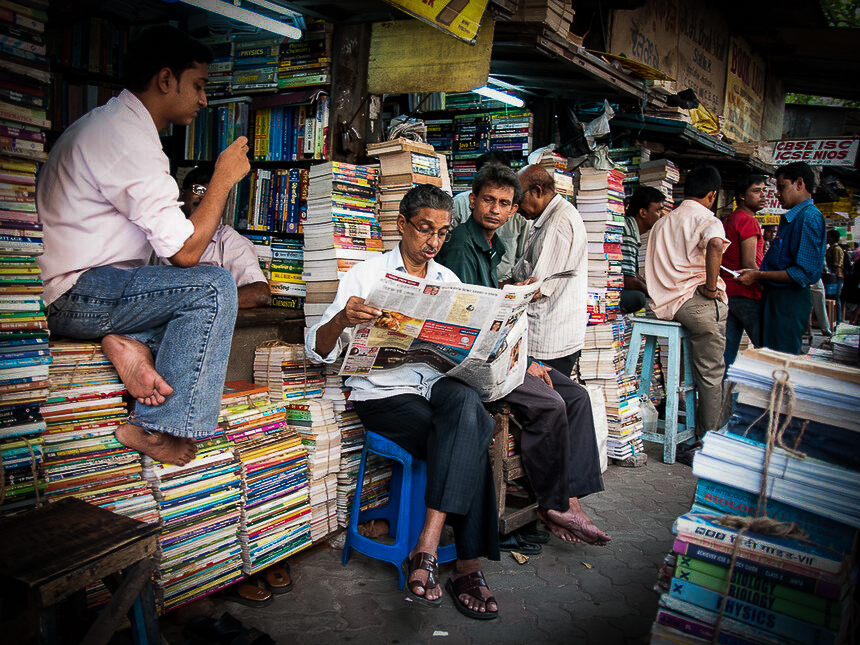 Calcutta or Kolkata as it is known now is perhaps India’s most literary city. Calcutta loves to read and every year, the city hosts the wonderful Book Fair. It is a much-anticipated event and I remember as a child, waiting for the fair to start. In those days, the 80s-90s, it was held at the huge central open ground called Maidan. For months, Calcuttans used to see the bamboo scaffolding of the shops go up, corrugated metal sheets hoisted as roofs, and finally, the banners of different publishing houses placed. Nearly all major publishing houses had booths and some used to have long queues waiting to enter the hallowed shops. There used to be excitement in the air as people thumbed through endless books, and magazines, looking at many, lusting after most, and buying some as precious ‘Boimela’ goodies. Dust used to rise from the feet as winters in Calcutta are usually dry and it used to mingle with the smell of fresh print, paper, and fish fry. The Book Fair ‘Boimela’ lasted for some time and by the time, it ended, most of the citizens had finished reading their purchases. All these efforts and anticipation were due to one of Calcutta’s biggest passions: reading.

I read therefore I am – Calcutta’s motto

Calcutta loves to read and there’s no doubt about it. The city has huge markets dedicated to books and one can hardly go across a few streets before stumbling upon shops selling literary items. In fact, in Calcutta, you can buy books from the pavements. Go to Golpark in South Calcutta and you will find vendors selling old second-hand books from sheets spread out on sidewalks. These are right next to a handful of hole-in-the-wall shops selling all kinds of used books, magazines, journals, encyclopedias, and all other kinds of reading materials – art books, classic screenplays, Westerns, grammar guides, history texts, etc. Freeschool street is another place where Calcutta’s bibliophiles go to thumb through piles of yellowed pages of second-hand, and often rare, hard-to-find books. You can find almost any writer’s works here  – from the Russians like Tolstoy, Gorky, and Gogol to the Brits (P.G. Wodehouse, Agatha Christie, Graham Greene, Gerald Durrell, other heavyweights) to Gabriel Garcia Marquez, Guy de Maupassant., Franz Kafka, and Jean-Paul Sartre.

The biggest book market is however in College Street, an area known as the ‘Boi Para’. It is considered the world’s largest repository of second-hand books and the largest book market in India. Stretching across 1.5 kilometres, this market has an impressive collection. Rare books are sold at dirt-cheap prices, and one can find books dating back 250 years, rare first editions as well as copies of books from publishers that have ceased to exist today. But if you are expecting an organized market at Boi Para, then you are in for a surprise. This long avenue that houses millions of printed information is dotted with hundreds of bookstores, big and small. It is also home to India’s biggest publishing houses. The bookstores range from standard brick-and-mortar affairs to small makeshift stalls made from bamboo, canvas, or sheets of metal. Each stall and store has its own history to speak of and bargaining is, of course, expected.

Apart from these markets, one can read newspapers just about anywhere in Calcutta. Getting informed is one of our pet passions as well and we like to know. Newspapers are still household staples in most homes in Calcutta and nearly everyone likes to read them. You will find people indulging in their favourite daily just about everywhere: at street tea shops, at work, at home, at leisure, on the move, and even during a break from work. Taxi drivers in Calcutta usually have their favourite newspapers tucked away in their cars and they thumb through the pages while waiting for passengers. You can even spot someone reading a newspaper on public transport and a couple of his fellow travelers peeping over his shoulder to read. Newspapers are stuck on walls for everyone to read and the city has many free reading libraries. This post is dedicated to this unique habit of my hometown, because Calcutta, indeed, loves to read.

College Street – Where to Read, Stroll, and Eat

The easiest way is to take a taxi. However, it is also accessible by car, metro, bus, or tram. The closest metro station is Chandni Chowk.

No College Street visit is complete without a stop at the iconic Indian Coffee House. These two city landmarks kind of go together. Although the food there is not so great and the coffee quite watery, Indian Coffee House is a place to reckon with. It is the most iconic building on College Street and ever since its inception, has been the meeting place for Calcutta’s glitterati in arts, academia, and politics. Since pre-Independence days, the Indian Coffee House hosted many freedom fighters, revolutionaries, and influential people like Netaji Subhash Chandra Bose, Rabindranath Tagore, the Oscar-winning director Satyajit Ray, noted scientist Jagdish Chandra Bose, Amartya Sen, Aparna Sen, Ritwik Ghatak, the talented singer Manna Dey, etc. It has seen a lot of history: many intrigues have been planned under its humongous high ceiling, many plays scripted, books discussed, and theories argues about. Even today, it has a great atmosphere; cheap, passable food, and a laidback service. Just go there to soak up the atmosphere and hear the buzz. For real, good Calcutta grub, however, head over to one of the College Street cabins. These are food joints that serve local dishes and are another of Calcutta’s staples. Cabins are frequented by all – rich, poor, students, professionals, and housewives. Cabins usually have a small room that may be partitioned off into booths, grimy tables, curt busy waiters, excellent food, and cheap prices. The food is cooked fresh every day and the most famous of College Street cabin is Dilkhusa Cabin. Go there for chicken kabiraji cutlets and dimer devils (devilled eggs) and finish it off with some traditional Bengali sweets from Putiram.

This is the buzz of Indian Coffee House

College Street, the best place to read in Calcutta

We don’t mind peeping over our neighbour’s shoulder to read.

Can you spot the reading man?

In Calcutta, we love to read

Go to read at College Street 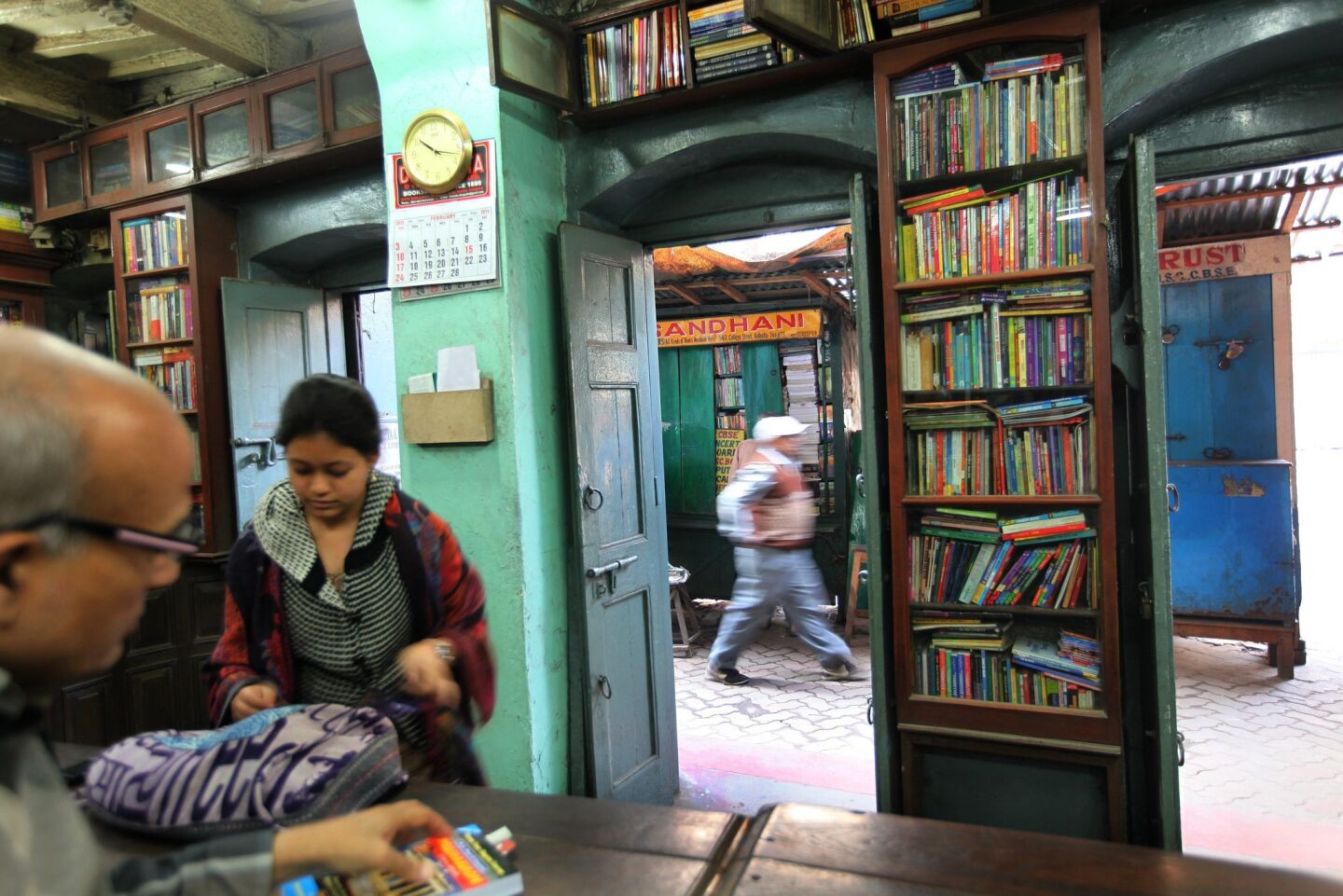