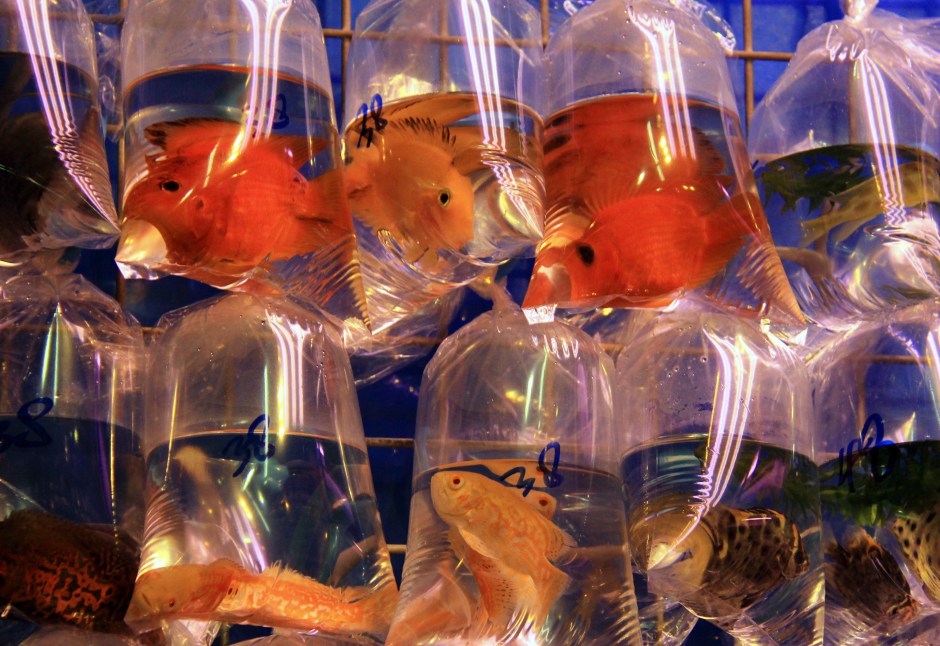 Life in a goldfish bowl in HonKong

It was a visual delight

The park where I wished to sit and daydream turned out to be the famous Yuen Po Bird Market.Rows of small shops sold birds of different sizes,colours and varieties and they all sang riotously.Bird cages hung in bunches,some with tiny occupants,others empty and bunched together in a very photogenic way.Made from bamboo and metal,they were the quintessential traditional Hongkong. Although very photogenic and romantic to have a birdsong park right next to flowering urban garden,the frantic way some of the bigger birds desperately clawed at the cage bars to be free was very heartbreaking.Most of the birds however seemed resigned to their fate and sat in their wooden cages with their food and water bowls made of porcelain.There were lots of cricket sellers too,with mesh cages and bags full of crickets.It was a total birdie shopping destination,complete with tiny toys,fake insects and even little cricket cages with a hook that can be suspended from the bird cages.I went out for the lotus blooms of the Flower Market again and drifted aimlessly.

Temple Street Market appeared magically after I walked out of Mongok Flower Market. Mongok is famous for street food and I had my wholesome share of steamed dumplings. Dimsum is a Cantonese bite sized specialty usually served with tea and although mostly a breakfast item,I can have them anytime.Dim sum evolved from the older tradition from yum cha (tea tasting), which has its roots in travelers on the ancient Silk Road needing a place to rest. Thus teahouses were established along the route and farmers, exhausted after a hard day in the fields, would go there for a relaxing afternoon tea. At first, people believed that combination of tea and food lead to excessive weight gain,but later when it was discovered that tea aids in digestion,teahouse owners began adding various snacks.

Dim sum literally means touch the heart and was originally not a main meal. It was only a snack and therefore meant to touch the heart,but over the years evolved as a staple of Cantonese dining culture, especially in Hong Kong. Dimsums touched my heart,the first time I had them and I have been a fan ever since.Although there is a mind boggling variety of them,my favourite ones are Gao and Har Gow.Gao are the translucent pearly white steamed dumplings with pickled cabbage filling and Har Gow come with succulent shrimp stuffing.The aromatic steam rising out of bamboo dumpling boxes,made my stomach rumble embarrassingly loud and I beelined for box full of them.

Traditional Chinese eateries have Cantonese speaking staff and menu,but you can always look up the pictures and list your choice on the order forms kept at every table.The old Cantonese took my form,smiled at my heart touching dimsum love and came back armed with an arsenal of melt in your mouth yummy dumplings.I took time in savouring them,washed them down with tea and finally went out into the crazy busy Temple Street Market.

Outside the dimsum place,a nightmare of too many lights,cacophony and people was in full swing.Rows of makeshift stalls sold everything from cheap fake jewelry,clothes,accessories,plants and strange lewd toys.Traditional Chinese eating houses clustered around,with portions of different parts of meat strung from hooks.Tourists,shoppers,pickpockets and shady people offering massage/accommodation pamphlets thronged at every step.I kept walking through rows of garish neon,past strangely dresses Chinese woman performers and other street artists,girls in tiny clothes spraying demo perfume and tide of bewildered tourists till I reached the main road.

It was another huge snaking road of too many people,lights and traffic.The horrible claustrophobic feeling came and I felt faint being caught up in the tidal pool.India was crazy crowded too,but perhaps the chaos kept it spread out and in Kowloon,the orderliness kept them moving about in a small area.It was like living a fishbowl with too many fishes-constrained,restricted and breathing down each other’s necks.

I crossed the road and got engulfed by extension of the same market.More lights,more stores,more people and a sharp rise in my panicky feeling.I rushed back on the main road,flagged down a taxi for HongKong and breathed easier.The taxi driver was a kindly fellow,who drove down a quiet alley and waited till I felt better.I rolled down the window,took lungfuls of Kowloon air and cooled my perspiring face against the window.Soon I felt better and he started weaving his way through the traffic.

We picked up a conversation and became friends.He took me to the Goldfish Market,a place which I would have never been able to find on my own.It was a strange market,an animal lovers’ shock.Feng shui believers regard an aquarium of goldfish as an auspicious addition to one’s home.While it looks pretty,it supposedly brings good luck too.Hence this pet trade burgeoned so much that an entire Kowloon’s Tung Choi Street North got dedicated to this business.Popularly known as the Goldfish Market in the tourist circuit,both sides of the street was lined with shops selling many different types of fishes, from weirdly shaped goldfish,small turtles,exotic aquatic plants,earthworms to colourful tropical species,which come at gaspingly high price tags.Rows of beautiful aquariums,mostly expensive saltwater ones shimmered in the evening light and few amphibians and reptiles crawled about too.Rabbits,dog food and even some guinea pigs and white mice were on sale.It was less crowded but equally heart breaking as the fishes stared pop eyed from plastic bags.

I had had enough of Kowloon and its exotic markets,and just wanted my cozy hotel bed.The taxi dutifully drove back towards HongKong and I relaxed in the cold evening air.Fresh cape jasmine tucked inside the air conditioning vent,gave out a lilting fragrance and beautiful harbour lights twinkled against the inky sky.Ibis hotel arrived soon and thankfully,I got neither fleeced or taken for a ride.I paid off the taxi,waved a happy goodbye and went for a quiet dinner at the Queen’s Street Cooked food market.Fried pork knuckles and sticky rice with peanuts warmed my thoughts and I relaxed in the comfortable easy HongKong air.

Would not have had such woebegone empty looks

While the plain ones roamed free

I left the pretty gilt trap

And stopped for some dimsums

They made me battle ready for crazy Kowloon

And way too many walkers

Made me rush into a fragrant taxi

And I gladly left

The fishbowl life of Kowloon