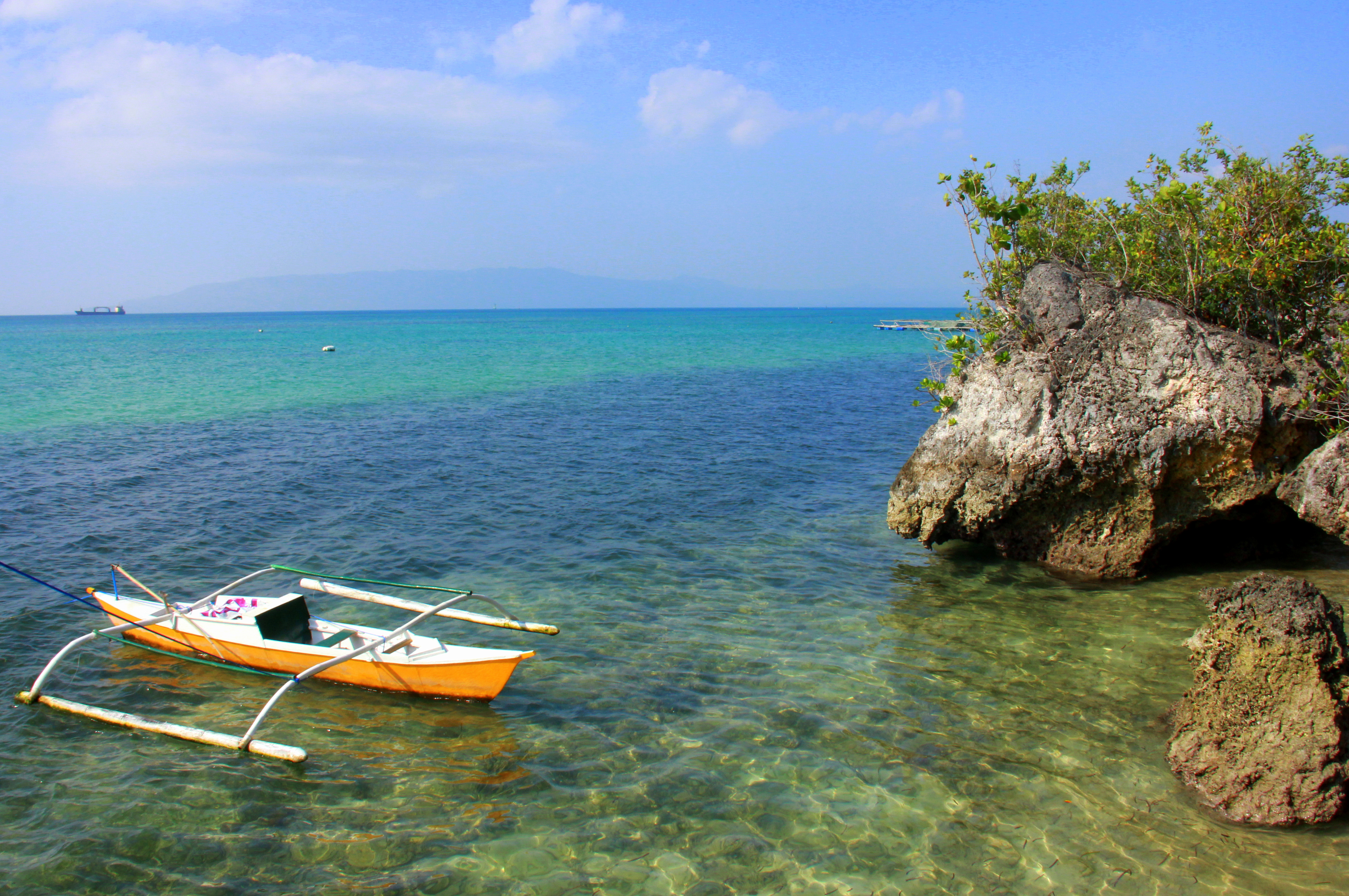 Bohol has a plethora of attractions and while world class diving at Panglao Island is it’s biggest draw, the Chocolate Hills are most famous for their extra terrestrial natural beauty. Located in Carmen, Bohol, this series of strangely shaped hills get their delicious name from their colour in the dry season. From the month of February to July, Chocolate Hills turn roasted coffee or caramel in colour when their otherwise soft green fuzz like vegetation dry up from the extreme heat. Made up of more than 1268 small hillocks, this unusual landscape is very uniform in shape and is scattered across a large area. The result is a mind blowing panorama of hundreds of green or brown hilly cones stretching across lush rice fields into a violet horizon. Due to their short stature, climbing these hills is not allowed and the best way to enjoy them is from a designated viewpoint.

Bohol had been unforgettable

I had lusted after the Chocolate Hills the first time I had seen its photo documentary on a tv show and the mystery that had surrounded them had left me wanting for more. Although popularly believed to have been formed by ancient coral reefs erupting from the sea due to massive geological shifts, most geologists refute this theory and the origin of the Chocolate Hills still remain controversial. Science declares them to be remarkable examples of conical karst topography found in many places around the world and due to their prehistoric age, the limestone hills contain abundance of rich marine fossils. Human imagination however credits more interesting theories to the origin of the Chocolate Hills and somehow they all involve giants. According to one legend, there were two giants who had battled for days, hurling boulders, rocks and sand at each other until exhaustion had overpowered them. In their state of tiredness, they had forgotten about their feud and become friends, only to leave the site soon. However, they had forgotten to clean up the mess they had created in their feud and the Chocolate Hills are said to be remnants left behind by the large messy fellas.

Another legend believes the lovely hills to be dried up poop of a naughty giant water buffalo who had plagued the residents of a town by eating all their crops and this had been my least favourite Chocolate Hills story. The most romantic legend however, is a very sad one and it tells the tale of a powerful, young giant called Arogo who had fallen in love with a mortal woman. Upon her death, a heart broken Arogo had cried nonstop and his tears had dried to form the breathtaking vista of low hills. While the stories involving the Chocolate Hills range from romantic, gross to really bizarre, the feeling upon seeing them for the first time is nearly always uniformly the same. Skepticism is most often the first reaction of every Chocolate Hills’ first time visitor and it is difficult to overlook the feeling that the attraction is over hyped.

I too, had not been able to decide if the trip to Carmen for the famous hills had been worth the trouble of biking all day and bumpy roads of Bohol had made the experience uncomfortable. The day, however, apart from the travel blooper had been wonderful and Bohol had revealed itself as one of the most exquisite islands of Philippines.  It had been on the second day of our Panglao trip that we had rented a sturdy scooter to go exploring and the Chocolate Hills had been on our minds. So we had left sunny Panglao soon after breakfast and had puttered past brooding swamps full of red crabs for Bohol. The long ride had been breathtaking and we had zipped past creaky bridges, crumbling colonial churches and strings of waving friendly locals. Bohol had been exquisite and the day had been deliciously sunny. Salty sea breeze had caressed our faces as our hours on the road had melted into one long patch of emerald green fields of young paddy. Cool long tunnels of drooping coconut palms had shaded us from the direct tropical heat and their their feathery fronds had created an irregular skyline of the entire island. It had been refreshingly non touristy and floating fish restaurants on Bohol’s languid rivers had reverberated with slow local gossip.

Had been its biggest highlights

Only the road had proved to be a serious pain in the rump and it had been badly broken in parts making our trip one long bumpy ride. The smiling friendly locals and the island’s awesome food, however had helped us overlook the bumpy trouble and we had enjoyed our most memorable Filipino meal at a roadside eatery in the middle of nowhere in Bohol. It had been somewhere in between the Tarsier Sanctuary and Carmen, that for a few Filipino pesos we had been served a delectable feast of everything delicious and Filipino cuisine is to die for. A curious mix of a whole lot of flavours and food of Philippines is distinctly Asian with strong Spanish and American influences. Since the islands are blessed with abundance of fish, vegetables and herbs, Filipinos have a lot of all the three ingredients and our lunch had been a sumptuous spread of local fish, vegetables, chicken and liver. It had come with a lot of friendly smiles and curious questions and we had rested there for awhile before continuing with our trip.

That day, our wanderings had taken us to all parts of the Bohol island and we had taken breaks at lush forests in which dewy moss had hung like thick green curtains. Winds had rustled slow and cool through their dark depths and tangles of vines had dipped bright tropical flowers on hidden from sight rivers. Waterfalls had plunged down from rocky precipices at different spots throughout the island and small rainbows had bounced off from their misty spray. It had been all too tempting and we had splashed about in the water to cool off our dust coated bodies. Our frequent impromptu dips had turned out to be blessings since the day had been hot and Bohol had been a fairly big island. Our action packed itinerary had taken us to all corners of Bohol and we had stopped at the Tarsier Sanctuary on our way to Carmen. The shy little animals had been the second reason why we had made a quick trip to Bohol and touted as one of the smallest known primates, they had been on the fast track to extinction for some time. No larger than the size of a hand of an adult man, tarsiers are really small monkeys and Bohol had been famous for being one of their natural habitats.

The lovely island has two tarsier centers and we had given Corella Sanctuary amiss to head for Tarsier Conservation Area near Loboc. This had been our first official stop in our Bohol itinerary and we had looked forward to seeing the tarsiers in the wild. The little guarded off sanctuary however had been  strange experience and it had seemed more like a cultured forest than a natural habitat of a primate. Filled with loud tourists and vendors selling souvenirs, ice cream and coconut, the whole atmosphere had left us pretty disappointed until, we had left them all to walk inside the park. Although a bit tame, the forest had been a cool respite and tall leafy trees in neat rows with boardwalks between them had covered the small area. Towering palms had swayed in between the green tropical undergrowth and tarsier caretakers had showed off the sleepy monkeys from a distance. Because of their endangered status, touching the tarsiers had been strictly forbidden and the tiny nocturnal creatures had stared at us sleepily from underneath thatches of large leaves.

Had been to die for

Although the sanctuary experience had been strange, seeing the tarsiers had been very exciting and I had stared in amazement at the tiny creations of nature. Blessed with huge eyes, 360 degrees rotating heads, funny facial expressions and incredibly soft fur, tarsiers had been one of the most incredible animals I had ever seen. Growing up to 118-149 millimeters and weighing around 113-142 grams, these tiny animals live on insects, produce only one baby a year and need forest cover for protection from natural enemies. Unfortunately, dwindling jungles of Philippines had made them fall prey to predators like owls, cats, dogs and it had been once a trend among the locals to keep the tarsiers as pets. Sadly, the freedom loving tarsiers do not survive in captivity as they have the tendency to “commit suicide” in cages. Ironically, the 45 million years old species and probably one of the oldest land species continuously existing in the Philippines. tarsiers in Bohol had been nearly reduced to as low as 100 animals and we had left the sanctuary with heavy hearts.

The drive from the sanctuary to Carmen had been a silent one and we had watched the sun slowly coming to the day’s end. The tropical light had turned softer and oblong shadows had slowly fuzzed in the background. The breeze too had become gentler and the pastoral beauty of Bohol had basked in a mellow golden light. In such a pristine aura, the world had seemed kinder, lovelier and we had zipped around the breast shaped Chocolate Hills in happy contentment. The hills had been absolutely delightful to explore around on motorbike and we had loved going around them on a scooter more than the much hyped view from the top. The mirador or viewpoint had been another crowded touristy spot and we had scrambled down from there as fast as possible. The base of the hills, in comparison, had been serene and beautiful in an almost Biblical way and we had sat down to watch a huge orange sun set among the ancient natural monuments. The air had turned cooler immediately with the setting sun and Bohol had drowned in cricket chirps and homing bird calls. A handful of stars had popped up on the darkening sky and buffalo bells had tinkled in the dusk. That had been our most memorable moment in Bohol and we had slowly wound back towards idyllic Panglao with memories to last for a lifetime. Some destinations have the charm to just let you be and Bohol had definitely been one of the most relaxing places I have ever been.

Not been the forests

But the incredible way

And sends you home

That last a lifetime