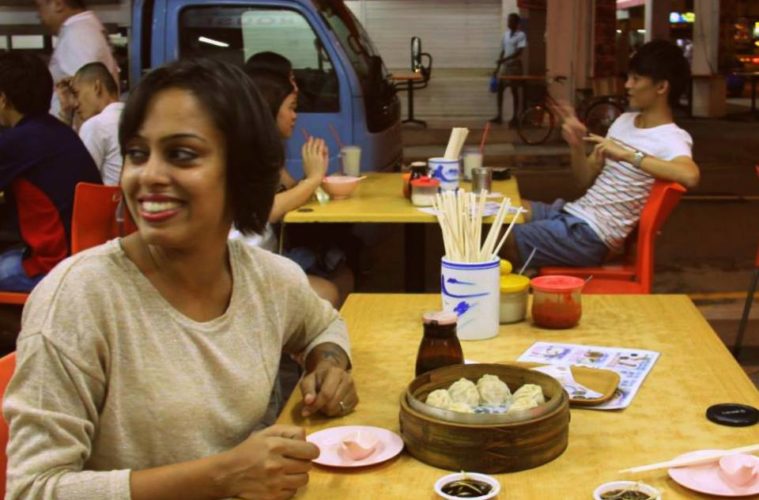 On my last visit to Singapore, I happened to walk around Geylang with a dear friend of mine. We were both quite drunk, were in hot pursuit of the best frog porridge in Singapore, and did not have much money. After spending the whole day, rambling around Orchard Road, we got tired of sophisticated pristine Singapore and craved for a more gritty atmosphere. Thus began our rendezvous of wining and dining at Little India, which we continued at Chinatown, and by late evening, stumbled unsteadily into Geylang. By that time, our wallets were very light, our tunes embarrassingly off-key, and we were giggling riotously for no reason at all. However, none of this, raised a single eyebrow in Geylang, because unlike the rest of prim Singapore, this was the naughty party district of the city-state.

Known for illegal gambling, prostitution, shady KTV bars, contrabands, and amazing street food, Geylang is as risqué as it can get in Singapore. Located beyond the Kallang River, it is an atmospheric quarter on the east coast, that is marked with beautiful period architecture, leggy streetwalkers, and some of the best local food in the country. Malay culture is predominant here and it has been like that, since the mid 19th century, when Malay and Indonesian migrant workers arrived to work in local copra and lemongrass farms.

Geylang is a melting pot of ethnicities and religions

Though frequently written off as the island’s infamous nightlife zone, Geylang happily retains a slice of old-school authentic Singapore charm and is a great place to explore on guided tours. The meandering lorongs (alleys) and bustling back lanes of this unique enclave are filled with colourful shophouses, shrines, schools, mosques, temples, bars, and markets. With a rich history steeped in multi-cultural migration, Geylang is a melting pot of ethnicities and religions and thankfully, most of it is largely untouched by urban redevelopment. As bipolar as it may seem, racy Geylang is considered as one of Singapore’s spiritual hubs and lorongs that run north to south between Sims Avenue and Geylang Road are extremely photogenic during the daytime. Think narrow alleys, like the tree-shaded Lorong 27, being choc-a-bloc lined with colourful shrines and temples and calm religious chanting reverberating through those snaking lanes.

The charm of ‘old-school’ Singapore in Geylang

This can be especially heard at Lorong 24A which houses many Buddhist associations. The restored shophouses of Lorong 34, which are painted in rainbow hues are a visual treat and when combined with smoking woks and burning incense, create an amazingly cinematic backdrop. On that night, however, I was unfazed by all this, and the only memory which stayed was the incredible “un-Singapore” energy of Geylang. I remember Geylang to be pumping with life when we arrived there and the traffic was at a standstill. Smart taxis flashed red “Hired” signs, pedestrian jay-walked nonchalantly between them and scooters zipped recklessly. Crowded pavements spilled with cheap plastic tables from restaurants and people ate, drank beer, and kept a wary eye on decked up girls walking provocatively by.

Recommended for You: Singapore Zoo guide

The quintessential Singapore humidity seemed a few degrees higher there and sweat shimmered on diners eating piping hot porridge. There was an incredible amount of people on the streets, jostling around for space, and the food smells mingled intoxicatingly with coiling incense. Bold pink and red neon signs blazed brazenly and karaoke bars stood proudly next to Chinese restaurants selling Singapore chili crab. In fact, my food memories of Geylang are most poignant and I remember everything I ate that night. This is quite a blessing since Geylang’s street food scene is to die for.

This is the nerve center of Peranakan Singapore heritage

In a city-state which takes its food seriously, being a hot-spot for cheap eateries is a hard-earned title and Geylang’s unpretentious local restaurants churn an amazing variety of ethnic delicacies. All lorongs from the Geylang Serai Market & Food Centre to the pretty Joo Chiat Road are lined with hawkers selling traditional street food of Singapore’s Malay community and the elderly can be seen dining peacefully there, with their singing caged birds in tow. The traditional kampong style Geylang Serai Market & Food Centre is another hot-spot for Malay Muslim dishes like banana fritters and bandung (milk with rose-syrup). It tastes a bit like ruby pink Rooh Afza and is absolutely refreshing in Singapore’s muggy heat.

A place of pleasure, vices, and oodles of character

Another poignant memory I have of Geylang, is of its illegal ubiquitous local gambling dens. They seemed to be springing out of thin air, with clusters of migrant Indian subcontinent workers, huddling under dim street lights. Makeshift tents, tables, and Bluetooth headsets bearing punters herded the gamblers through the game and they kept away nosy onlookers like me. Most of them were set up between residential buildings, shrines, and massage parlours which flashed “Pleasure” in gaudy pink neon lights. Despite my fuzzy state of mind, I remember feeling extremely out of place there and for the first time, was actually unsafe in Singapore. The gambling punters shooed me away fiercely and massage parlours refused to let me in, even to have a look.

In Geylang, eat till you drop

We stumbled out of the shady lorongs into the broad traffic-filled street, where music throbbed from edgy nightclubs and dumpling wafted delicious steam. Shaken by our walk on the seedy side of Singapore, we resumed our local food binge and ate nearly everything in sight with gusto. Fear is believed to be a great appetite booster, and after that, we ate frog porridge, dumplings, Singapore chili crab, Hokkien Mee, and a few sticks of Kwong Satay. Yum.

From Changi airport, hop on the MRT train to the “Aljunied” station and take a taxi to your destination in Geylang.

In Geylang, the ethnic Malay residents keep their culture alive and vibrant. There are charming and colourful historical buildings in nearby areas such as on Joo Chiat and Katong Road, which give glimpses of a long-gone Singapore.  Interesting places to see in Geylang are the Geylang Serai Market and Joo Chiat Street. The Geylang Serai Market is five minutes walk from MRT Paya Lebar. Built in a traditional kampong style, the two-storey building has shops selling a variety of Malay and Middles Eastern products such as spices, medicines, batiks, scarves, cosmetics, vegetables and fresh food. There is an interesting food court which specializes in inexpensive Malay foods. Named after the famous millionaire, Chew Joo Chiat, Joo Chiat Street is one of the most interesting areas of Singapore. The street is lined with gorgeous Peranakan heritage shophouses and buildings along with a slew of stunning street art.

What to eat in Geylang: