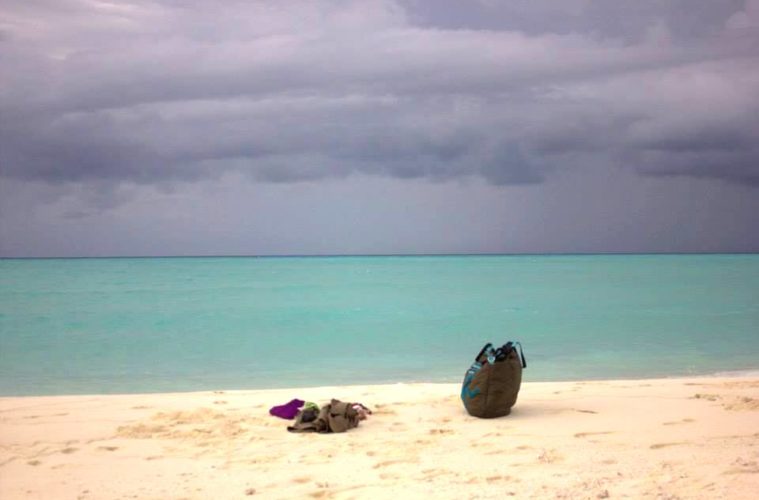 I had fallen in love with the Maldives even before landing into the tiny island nation. Although the Maldives seems to us Indians, as just a stone’s throw away, it took a surprisingly tedious flight to reach Male, its capital city. For me, the travel distance seemed longer since I had to fly to the southern coastal city of Kochi from Kolkata to proceed towards the Maldives and by the time the Spicejet airline flight had landed in Male, I was bone tired. It was not yet 10 in the morning and I had already spent more than 7 hours cooped up inside aeroplanes. Transits and terminal changes made things worse and for a fleeting moment, I considered getting off at Kochi.

The first sight of the Maldives

The dilemma continued nagging my sleep-deprived brain when suddenly the turquoise-rimmed white sands of Maldivian islands unfurled below. With their appearance, a collective gasp went through our aeroplane and the smallest Asian country made its presence felt. The Maldives is minuscule, both in terms of population and land area and it is also the lowest country on the planet. With its lowest natural highest point being around 2.4 meters, the breathtakingly beautiful dream destination is a fast disappearing nation. It is termed as severely endangered and guidebooks from all over the world, list it among the “Places you should see before they disappear”.

What are the islands of the Maldives made of

Reports of the Maldives sinking have sent environmental alarm bells ringing and scientists from all over the world are greatly concerned of the consequences of this mega ecological disaster. Unfortunately, until now, environmental think tanks have not been able to come up with a very sound solution and the biggest hindrance lies in the geological location of the archipelago nation. Situated on top of a vast submerged mountain range in the Indian Ocean in Asia, Maldives is made up of 26 natural atolls. Contrary to their appearance, atolls are not solitary islands and they are in fact giant rings of coral formations which have broken up into countless pieces.

Atoll is derived from “atholhu” which is a Dhivehi word (national language of the Maldives) and it loosely means lagoon island. The coral reefs which fringe these islands often create shallow lagoons which are excellent for snorkelling, thus rendering them the name atoll. The Maldives has is divided into 20 atoll groups for administration purposes and they include both inhabited, uninhabited islands and coral reefs. Out of them, only 10 administrative atoll groups are open for tourism and the most popular atolls are Raa, Baa, Alifu, Vaavu and Kaafu.

You may also like: Maldives in monsoon photo essay

The different boat transfer from Male to other islands

Male is in the centre of a cluster of islands and speedboat transfers are the most economical way of travelling to the islands from Male. Seaplanes, yachts and domestic flights are also available, but they are quite expensive and are quickly sold out. The local ferries which ply between the islands are very slow (sometimes taking up to 6-8 hours for the far-flung ones) and they do not have a fixed daily schedule. They sail from different ferry points in Male and for tourists, it is very difficult to locate these embarkation points. For most people, the easiest option for a Maldives vacation is to buy an all-inclusive holiday package at one of the numerous island resorts. The tour operators and/or the resorts manage everything and they are quite expensive in peak season.

Time your itinerary with the boat transfer

However, with proper planning, Maldives can also be very easily a DIY project and the itinerary should be planned before landing in Male. Having a speedboat transfer to the selected island, confirmed for the arrival day or the day saves a lot of time and it is important to time the vacation properly as they do not usually sail on a daily basis. Thus it is important to coordinate with your resort or guest house before arriving regarding them. The airport transfer can be easily managed on your own and it also saves you at least 12 USD. If you intend to stay in more than 1 island, then, once again, it is important to schedule the itinerary as per the transfers dates. It is also cheaper and less time consuming to not change from southern atolls to northern ones.

Although the far-flung islands are most beautiful and pristine, travelling to and fro from them needs a lot of preparation and planning. Most popular tourism islands are located within close proximity of a local airport and from there, onward speedboat or dhow transfers are provided. The local airline Flyme caters to these islands and they do not have daily flights to all the airports. Flyme seats sell out fast and locating the closest airport of the atoll of your destination island makes Maldives transfer planning more hassle-free.

Arriving into Male International Airport at Hulhule Island was one of my loveliest travel feelings I and the relaxed vibe took over immediately upon landing. The cheerful island sun kissed my face warmly and a salty sea breeze tousled my tired hair A most gorgeous blue-green ocean lapped gently nearby and it looked like the perfect gateway to a tropical island paradise. I stared in amazement at the crowd of boats, yachts and colourful fishing dhows bobbing in the water. The Maldivian immigration procedure matched with the island’s smooth, happy vibe and within minutes I joined the crying gulls on the other side of the airport.

Travel Tip to the Maldives for Indian Passport Holders

Indian passport holders are eligible for 30 days Maldivian tourist visa on arrival and you may need to furnish a return ticket and hotel reservation vouchers. Although these documents are rarely checked, it is more sensible to carry e or paper copy of the reservations.

Are home to many.

The strange deja vu in the Maldives

A boat jetty extended immediately upon leaving the airport premises and the travellers queued up for the waiting water taxis. It was all too exciting for me and I loved the way the passengers, pilots, cabin crew and other airline staff piled into the boats to get out of the airport. The scene was of a quintessential island life and I had the strange feeling of never having left the Indian soil. Every Maldivian face in the water taxi looked as if they were plucked straight off the South Indian states, yet our cultural difference gave out a strange familiarly alien aura. The feeling was akin to deja vu, except that it was for real.

Unfortunately, it is a nation under serious threat.

It became stronger when the busy, noisy Male arrived and this strange “deja vu” remained constant throughout my entire Maldives trip. Despite the familiarity, I never succeeded in crossing the cultural chasm there and never had the feeling at home there. A strict Islamic country Maldives prohibits consumption of alcohol and pork and dogs are not allowed on inhabited islands. Only the resorts are exempted from following the mandatory strict Islamic codes and that is why only a handful of atolls are granted with tourism permits.

The luxe destination of the Maldives is finally open for all

Ironically, tourism is the backbone of the Maldivian economy and for a long time, the island nation catered only to the rich clientele. The archipelago was never a budget or backpacker friendly destination and the recent opening of a handful of cheaper accommodations made the Maldives accessible to mid-range budget travellers. Thus, it was possible for solo travellers like me to venture into the ultimate island destination and complete with white sands, endless blue ocean, dazzling marine life and gorgeous reefs, the Maldives promised to be absolutely unforgettable.

Male is more than what meets the eyes

There is nothing more frustrating than not being able to recollect something, which seems to be stuck at the tip of your tongue and only the uncomfortable feeling of alien familiarity can perhaps rival it in annoyance. As mentioned before, this was my constant Maldivian anathema and I failed to like Male. For a dinner plate sized city, the Maldivian capital buzzed with too much of energy and its busy streets contained an insane amount of motorcycles. They were everywhere, on every inch of the island city, either stacked tightly in jam-packed parking areas or constantly zipping around like crazy meteors. A few taxis and cars constituted the rest of the traffic and I found Male to be best explored on foot. The guesthouse Skai Lodge was one of the new budget accommodations in Male and at 80 USD/night, it was clean and comparatively cheap.

From being buried alive

Remembering India at every Male moment

The Male boat jetty was an exact replica of its Indian counterpart, albeit on a much smaller scale. Familiar subcontinent sights and sounds spilt out from it and complete mayhem ruled there. Coconut sellers, porters, taxi drivers, resort touts, humid air, fisherwomen, excited large families, bewildered tourists and splashing, slightly dirty ocean waves poured forth and to me, it could have been a scene from anywhere in coastal India. The unsettling familiarity continued as I walked along the motorcycle crammed streets of Male and the 10 minutes walk to the Skai lodge were extremely bewildering. It seemed to me as if I had fallen down some kind of magical rabbit hole and the entire experience was not real. Familiar faces, South Indian movie songs, Bollywood, spicy aromas and cantankerous faintly known languages bombarded me from all sides and I helplessly drowned in an overwhelming lost feeling.

The Maldives is an ecologically sensitive area.

The festive political look of Male

The Maldives was gearing up for election during the time of my visit and Male was decorated with many colourful festoons. The whole atmosphere seemed more festive and one of my favourite Male memories was to amble under them on hot sunny noons. Maldivian afternoons were pretty hot and going out for lunch was an ordeal. The lane of my guesthouse, thankfully had such a massive profusion of stringed electoral flags, that they created a rainbow coloured fluttering shade which completely cut out the sun. I liked walking under them as they scattered multi-hued pieces on the asphalt road and most of the times they used to lead me to the ocean. All roads in the Maldives lead to the Indian Ocean and the nation was completely dependent on it.

It is not just a tourist destination,

but also our home, a part of our planet.

Male can get tired quickly

With so less landmass, hardly anything grew there and nearly everything had to be imported from foreign countries. India was one of its biggest suppliers and nearly everything in Male screamed of home. The Maldivian cuisine too was a spicier version of South Indian coastal food and it was hugely fish based. Personally, I found Maldivian cuisine to be pretty forgettable and a terrible chicken dining experience taught me to opt for only fishes during my entire stay. My Male days were not special enough to stand out among my travel memories and the island capital made me feel slightly claustrophobic. While the days were okay, the evenings always made me lonesome and my Male nights were spent craving for transfer to Fenfushi Island. It was an inhabited island in one corner of Maldives and I eagerly counted moments to get away to this idyllic paradise.