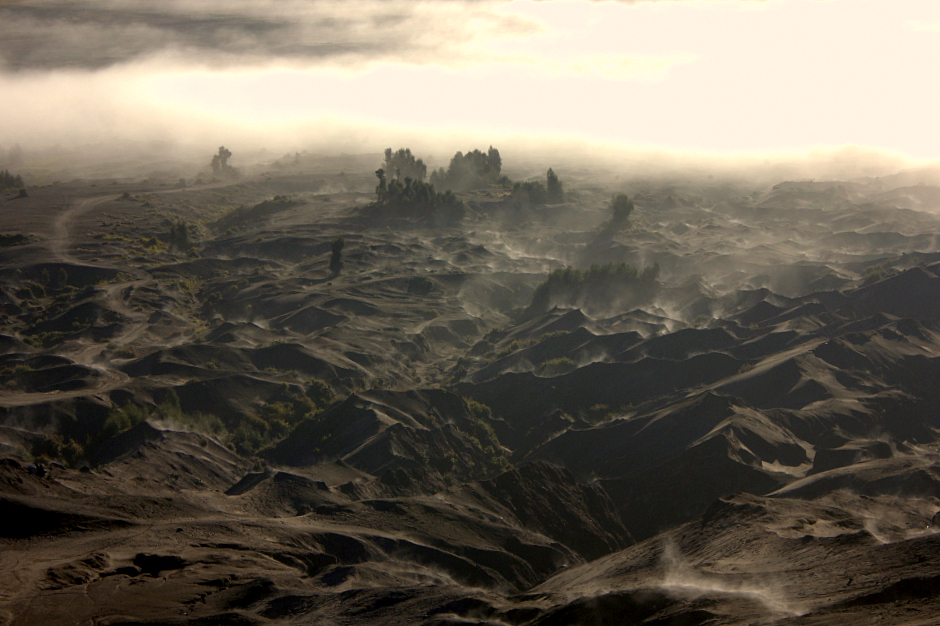 Mount Bromo sunrise and the Sea of Sand

Once while walking around Yogyakarta’s shopping district of Malioboro, I succumbed to the fantastic photos of Mount Bromo and Ijen Plateau and booked myself in a small group tour. It is one of the most popular trips of Java and all Jogja tour operators sell them by the dozen. While Mount Bromo is a “Do-It-Yourself” kind of trip, Ijen Plateau is not easy to access. Both the places are far from Yogyakarta and the lack of travel infrastructures (and/or widespread information about them) makes Bromo-Ijen group tours very popular. They are also quite cheap and perfectly suited for solo travelers like me.

A bit about smoking Mount Bromo

Situated in east Java, Mount or Gunung Bromo is an active volcano. It is a part of the Bromo-Tengger-Sumeru National Park. Named after the Hindu God of creation, Brahma the Bromo region is very famous for its surreal beauty. Gunung Bromo is not as active as the highly volatile neighbouring Mount Sumeru, but the beauty of its perfectly shaped cone rising out from the eerie Sea of Sand is jaw-dropping. The wild and desolate Ijen Plateau is further away from the Bromo-Tengger-Sumeru National Park and it is home to Indonesia’s most famous acidic lake. It is located near Banyuwangi city and not many Bromo travelers continue up to it. Banyuwangi is located in the easternmost tip of Java, from where a ferry to neighbouring Gilimanuk in Bali is just some minutes away. Famous for sulphur production and coffee plantations, Ijen Plateau is like no place on earth. A visit to Ijen Plateau promises a surreal sunrise, Sea of Sand, grisly legends of human sacrifice and the crater lake is of the most vivid aqua blue colour. It is so outlandish and remote, that even Mount Bromo, as spectacular as it is, pales in comparison.

I don’t have much recollection of the road trip to Probolingo which is the gateway to the Bromo region. The bus ride was really long (around 8-9 hours) and the minibus shuttle was horribly cramped. By the time we reached the base village of Cemoro Lawang, it was already very late in the evening. The drive would have been beautiful if traveled in more comfortable conditions and we had passed through a long stretch of Java’s stunning coastline. It was very dark when we reached Cemoro Lawang and the cool air gave away its high altitude location. The hotel at Cemoro Lawang was comfortable after the long ride and after a quick dinner, I went to bed.

Suggested Read: MY JAVA STAY IN A NUTSHELL

A horse rider inside the ancient caldera at Mount Bromo

According to the Bromo tour itinerary, the next morning was guaranteed to start early and I eagerly waited to watch one of the most spectacular sunrises in the world. My group members and I woke up around 4 and followed our guide to position ourselves at the popular vantage point of Mount Penanjakan. It was quite cold in the morning and we shuffled around to stay warm. Our breaths came out in white puffs and a milky white moonlight poured over from the sky. The moonlight illuminated the surroundings with astonishing clarity and in the close distance, I could see wisps of smoke rising out like ghosts. The bright moonlight dispelled any sense of supernatural aura and all we could feel was a sense of electric anticipation crackling through the crowd.

Flocking to see the sunrise at Mount Bromo

A dramatic sunrise and a disappointing hike

The Bromo sun rose in the most dramatic way possible. It drew a collective gasp from all its viewers and was so glorious that it almost felt staged. After faintly staining the eastern sky, the silvery golden orb of the sun started lifting the veils of mist from the surrounding Javanese countryside and revealed the smoking cones of Mount Sumeru and Mount Bromo in the most cinematic way. Mists swirled around the volcanoes in perfect rings and in the morning light, the mountains changed colours from pink, orange, brown and green. The profusion of wild pink flowers growing in abundance at our feet made the scene all the more spectacular and I felt as if it was in a movie. The vast emptiness of the Sea of Sand seemed straight out of science fiction and in the orange glow of the sunrise, the entire scene had a post-apocalyptic look. With faint pinkish-orange sunlight guiding us, we trooped down to the vast, dusty Sea of Sand. Faint glimpses of people, horses, and spires of a temple peeped through the thick mists and the whole setting had a surreal look. The short moderately steep walk to Bromo crater, however, came as an anti-climax and it slightly marred the entire experience. The billowing noxious sulphuric fumes made me extremely nauseous and the Bromo crater lip was badly littered.

The lip of the crater of Mount Bromo

The Martian landscape of the Sea of Sand

Declared as a national park in 1982, the volcanic complex of Bromo-Tengger-Sumeru is very unique. It is one place where a new volcano forms inside a larger and extinct volcano and there are at present 5 calderas inside the ancient Tengger volcano. Because of the huge deposit of ash and lava rock spewed by Tengger when it blasted a few millions of years ago, the vast area inside its caldera is barren. Only fine blackish sand (Laotian Pasir) cover the ten miles of Tengger caldera and on misty mornings make the region resemble a Martian landscape. It is one of the most unworldly national parks in the world and its beauty is of absolutely another plane. Stunning sunrises, mysterious cloud formations, swirling Dervish like mists, and intense natural colours comprise its beauty and Bromo features in nearly every Java travel itinerary. The eerie landscape gave rise to many equally strange myths and legends, the most famous being the human sacrifice story of Prince Kesuma.

According to the legends, a 15th-century Majapahit princess and her husband fled from the Islamic forces and took shelter at the foothills of Mount Bromo. There they established the powerful Tengger kingdom, which prospered thus saving their religion too. The couple, however, being childless prayed to God Hyang Widi Wasa who emerged from the crater of Mount Bromo and blessed them with 25 children. The powerful god, however, had one condition and it was that their last born should be sacrificed to the mountain. The royal couple, out of parental love broke their promise and angered the mountain god by refusing to sacrifice Prince Kesuma. It is said that a mighty explosion of Mount Bromo followed, which nearly destroyed the kingdom and swallowed up the poor prince. His royal siblings to appease the god had held a ceremonial offering at the crater every year and the dreadful ritual is still followed today as the famous yearly celebration of Upacara Kasada. Every year during the festival, pilgrims travel together up to the Bromo crater to throw offerings to the volcano. Although human sacrifices stopped hundreds of years ago, flowers, fruits, vegetables, livestock, and money are still poured into the smoking active volcanic crater every year. After the hike to the crater of Bromo, our little group returned to Cemoro Lawang. We were to spend that day in the little village and I rested as much as possible. The next leg of the journey to Ijen Plateau meant another pre-dawn start and that trip guaranteed to be even more surreal than Bromo itself.

Location: Most easily accessible among all of Java’s active volcanoes, Mount Bromo is around 4 hours away from Surabaya. The nearest train station is Probolingo and many group tour packages are available from Yogyakarta.

Mount Bromo tour package scams: Although I did not have any issues with my tour package, there are too many stories of Bromo-Ijen package tour scams floating around, to make them wary choices. Most package tours conclude with ferry transfers to Gilimanuk in Bali and/or include Ijen (optional).

Where to stay for Bromo: Cemoro Lawang, Wonokitri, and a few other villages offer charming hotels and homestays and it is possible to camp inside the park.

What to pack: It gets quite cold at both Bromo and Ijen and warm clothing is necessary especially at night and early morning.

Entrance ticket caution: The entrance ticket for the national park is available at the office near the parking lot and most travelers recommend asking for vouchers/receipts against payment. Stories of bogus park tickets being fleeced off from tourists by middlemen near the office are quite rampant and it is best to exercise caution.

Bromo sunrise guide: The best Bromo sunrise point is Mount Penanjakan and crater can be easily walked around on foot. Horse rides, motorcycles, and jeeps are also available inside the caldera and it is an easy walk up to the Bromo crater.

Mount Sumeru trek: Mount Sumeru to is open for serious trekkers but extreme caution needs to be exercised as it is a very active volcano. Most parts of the mountain are cordoned off as off-limits during periods of eruptive activity and high level of physical fitness is required for this strenuous trek. A guide, permit and prior information regarding the current state of the volcanic activity are strictly advised before undertaking a Sumeru trek. Information is available at the park office at Ranupani.

Check out the following sites, for more information on Mount Bromo without a package tour.