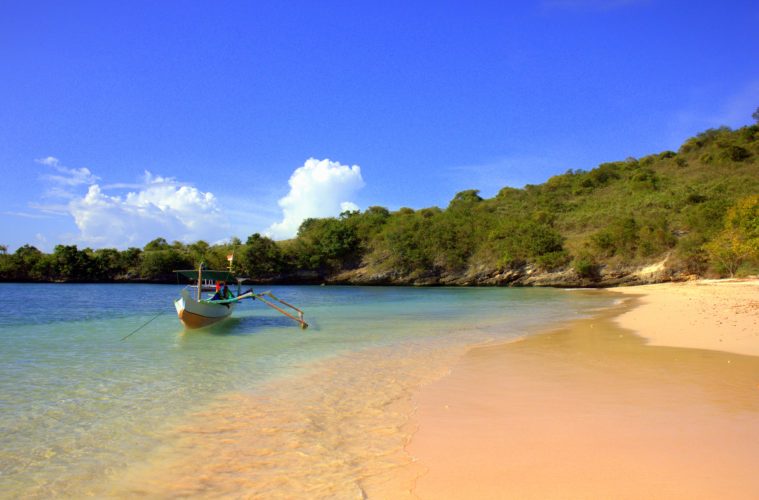 Exploring Lombok beaches and a bit of local life

What do you do at a place which is paradisaical?  Swim, explore, relax and enjoy the beauty to the fullest? I did all that and more at Lombok. To call this island a tropical paradise would not be exaggerating. With miles of unexplored pristine beaches, the lesser-known (along with well-trodden) Gili islands and intriguing island customs, I enjoyed my Lombok stay a lot. Apart from combing Lombok beaches in my spare time (which I had plenty), I loved exploring its quaint kampungs. The kampungs or local hamlets offered slices of local life, which were very different from the polished lifestyle of the residents of Bali. Scrawny chickens ran amok here; prized fighter roosters were carefully guarded under wicker baskets, decorative cages held songbirds, and traditional Sasak houses stood in clusters amidst bamboo groves. These were villages where the local people lived, wove their Ikkat textiles, played music, and revered rice as the “grain of life”. Far away from the touristy Ende and Sade Sasak villages, the Sasak men puttered around in rickety motorcycles there, babies slept on the ground on woven rattan mats, and children walked miles with water pots on their heads.

The Sasaks are the largest tribe of Lombok

There’s more to this paradise than awesome Lombok beaches

The Sasaks are the native people of Lombok. They comprise 85% of the population of Lombok and is the largest tribe of the island. Interestingly, despite being a predominantly Muslim community, Sasaks are racially and culturally closely related to the Hindu Balinese. There are basically two kinds of Sasak communities: Lima Waktu people who follow the ‘five times a day praying” form of Islam and the Wetu Telu or the Three Symbols who only pray three times a day. Then there is the tiny fraction of Bodha Sasaks who live on the slopes of Mount Rinjani and worship animistic gods. Recognized by Buddhists by the Indonesian government, they are untouched by Islam and incorporate some Hindu and Buddhist influences in their rituals and religious vocabulary. Irrespective of their faiths, the Lombok locals are gentle, friendly folks. They are famous as highly skilled artisans, excellent potters, Ikkat weavers, and have their own signature traditional housing style. Pile built, bonnet domed Lumbung (granary) and interesting tiered thatched houses make a traditional Sasak village, which although rarely found at the cities, were amply scattered in the poorer (and culturally proud) southern part of the island. Nowadays, two traditional Sasak villages (Sade and Ende) have been set up for tourists to understand and appreciate the indigenous culture of Lombok.

Recommended Read: Why I loved Indonesia

The locals of Lombok are one of the nicest in Indonesia

Explore a bit of the local Sasak life

There are two things I observed about the Sasaks of Lombok. They loved songbirds and a good morning market bargain. Visiting the morning local market was one of my favourite activities as well and they provided a break from the monotonous Sengiggi routine. The morning fresh produce markets of Lombok sprang at conspicuous junctures between the villages and I shopped for fruit from the Sasak women there. They used to squat on the ground on their haunches, their wares spread on sheets in front of them. Wearing huge conical bamboo hats, they displayed fruits, vegetables, and herbs in exotic piles, and often sat gossiping with their neighbours about the “orang asing” (foreigners) who came and went in waves.

A jackfruit seller in a local market in Lombok. The fruits were honey sweet

The lure of exotic local life and Lombok beaches

Incidentally, Lombok had a substantial number of foreigners who stayed on the island for long periods and they ranged from surfers, drifters, beachcombers, settled backpackers, missionaries, to expat workers. Like most local residents, the “orang asings” shopped for their needs at these markets and often brought their visiting friends or relatives to see photogenic piles of ears of corn, plantation flowers, ruby red chilies, and strange unknown herbs. After all, this was the slice of local Lombok life which they were experiencing and the morning markets always guaranteed lots of topics to exclaim or gush over. There was an abundance of exotic sights, sounds, and experiences and cacophony of traffic horns mingled with shoutouts of exciting bargains and tremulous voices of nervous singing birds. It was as local as it gets and a far cry from the superb Lombok beaches where you will not see anybody for miles or the bland sterile touristy environment of Sengiggi.

You may also like: A solo trip to Lombok

Food, glorious, food: something which bonds the locals and outsiders of Lombok

In touristy Sengiggi, all these pleasures got replaced by a bagel, French pressed coffee, and frequent Lombok excursions. I worked five days a week, had late starts of the day, and my evenings were usually free. Sengiggi had some nice places around and on weekdays I went for evenings walks at the beach Hindu temple of Pura Batu Balong. Dedicated to the Hindu god of creation, Brahma, the temple was very picturesque and I once witnessed a religious ceremony there. There was also a small Muslim shrine near the temple. It was dedicated to a drowned fisherman/seafarer’s God and drew lots of followers at sunsets. While the working days slowly started passing by in a comfortable familiarity, the weekends stretched before me like an unending track of time. After a few weekends of being hemmed in at home, I decided to explore Lombok beaches and eventually morphed into a complete beach bum.

Suggested for you: The beautiful Andaman and Nicobar Islands

Getting out of Sengiggi can be very rewarding

Go into the Lombok countryside

Close to home, the Sengiggi beach was quite passable and I was very much attracted to the outlying Lombok beaches of Lombok, whose beauty are popular topics of discussion among the island’s expats. Thus, during my stay I went on numerous trips to the stunningly empty golden sands of Mawun, the gorgeous bite-sized Selong Blanak, and the idyllic Tangsi or Pink beach. Mawun and Selong Blanak were not difficult to find and the en-route landscape was similar to the rest of the island. There were huddles of placid buffaloes with big wooden bells, forested dry patches, tobacco fields and men in belted sarongs, conical hats, and bamboo bird cages. It was  Tangsi or the Pink Beach which was difficult to access and it a neat two and half hours drive from Mataram to reach there. Located in the eastern part of Lombok, and the road to Tangsi went from being badly broken to practically nonexistent. Villages became dismally poor and according to geologists, this area was the driest and arid part of the island. Difficult stories of villagers facing acute water crisis and sometimes having to walk for hours to fetch a pail of water seemed horribly true and huge craters riddled the road. Tangsi was one of the least visited Lombok beaches and thus did not have much tourism infrastructure. Everything was closed during the day due to Ramadan and fasting villagers lazed in the shade of their huts.

The Pink beach is the prettiest of Lombok beaches

The Tangsi beach turned out to be very difficult to find. The local Sasak community spoke no English and my paltry knowledge of Bahasa Sasak did not help either. Somehow after going round in circles for some time, I managed to be on the right track and finally reached the nearby Sekaroh village. Protected deciduous forests (it used to be the king of Lombok’s hunting ground), lack of infrastructure and tourists, made the area delightfully pristine and a kind villager’s self-guided direction took me to my destination. The beautiful Pink/Tangsi beach got its name from the deep red-hued sand which blushed crimson at sunsets. Particles of the coral reef called Homtrema rubrum, mixing with the white sand, supposedly impart its gorgeous colour and the curved bay was a beach lover’s delight. Accessible by a steep downhill drive from the forest path, the rocky dirt track was exactly where I skidded off my scooter, scrapped my knees, elbows, and chin badly and managed to dent both my vehicle and my body.

Ever had a place get under your skin?

Tangsi, however, was worth all the dents and pains and apart from a wee bit of scattered trash, it was the most beautiful of Lombok beaches. Absolutely empty except for an uninhabited army barrack on the surrounding hill, only a deep blue sky and a bluer ocean accompanied my Tangsi solitude. The hill was as historical as it could get in a remote area like that and it is said that the Japanese soldiers had once made it their headquarters. A few Japanese relics were said to be still scattered all over the area in form of artificial dugouts and canon, but on that day I had been happy just to laze about on the astonishingly pink sand with a book. With each Indonesian day, I was slowly getting comfortable with solitude and somehow it is impossible to feel alone in Lombok beaches. Sky of the clearest blue, a gentle turquoise ocean, and jewel-hued sunsets are omnipresent in this laidback island and over the period of time, they become a part of your daily routine on this magical island.

The perfect crescent of sand which marks Lombok beaches

Explore Lombok beaches one at a time

A lonely fisherman waiting for a catch near Sengiggi

The quintessential water buffalo with the wooden bell: a common sight of Lombok

Lombok has stunning beaches waiting to be explored

With some general doses of local life experiences.

And take time to enjoy

And some exotic local life.