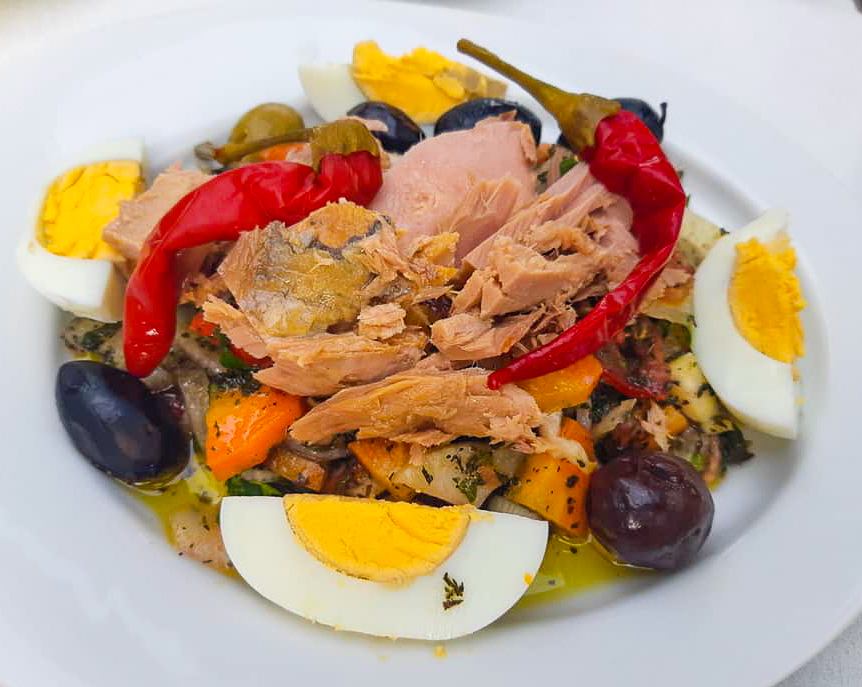 Tunisian dishes you must try

The cuisine of Tunisia is heartwarming and palate-pleasing. It is full of flavour and the Tunisian dishes reflect the country’s rich history, influenced by the Berbers, Jewish, Arabs, Andalusians, Italians, Turkish, and French. While this cuisine varies from region to region, Tunisian dishes combine French and African flavors with a spicy kick. A typically Mediterranean cuisine, it consists of cereals, vegetables, lamb, legumes, beef, chicken, and a variety of spices. Since no trip to Tunisia is complete without a taste of its savoury fusion of food and flavor, it is best to know some of the country’s culinary highlights.

Tunisia’s best-kept secret is its wine. The country’s Mediterranean climate and rich soil make it an ideal location for wine production. However, most overlook this tiny North African nation as a wine hotspot. In reality, Tunisia deserves much respect for its rich wine history and modern cultivation of numerous grape varietals. According to historians, Tunisians first began producing wine over 2,000 years ago. Although the Arab control in the eighth century nearly eliminated the practice, the French colonization brought the tradition of winemaking back to Tunisia in the late 1800s. Till today, the country’s wine production continues to have a heavy French influence. Deep reds and rosés dominate the scene and Tunisian wines often share the names with their French counterparts. Most of Tunisia’s wine cultivation occurs in Cap Bon, the country’s northern peninsula. The winemakers there carry on the legacy of the famous Phoenician agronomist Mago, who wrote the earliest instruction manuals on wine cultivation from Carthage around 100 B.C.

Tunisian dishes are meant for sharing

Another important thing to remember about this country’s food gastronomical culture is that traditional Tunisian dishes are meant for sharing. One famous chef named Tunisia’s signature cooking style “Generous. It is said that in Tunisia, you can’t make couscous for one. It’s usually for five or six or 10 since Tunisians love to eat, and feed their guests. If you’re invited to a Tunisian home for dinner, be prepared to be lavished with a variety of heartwarming and palate-pleasing delights. Beautiful ceramic platters painted in colourful geometric patterns or the traditional green and yellow make the presentation of a dish as impressive as its preparation and the colourful Tunisian dishes will make you want to dig in immediately. However, be careful since Tunisian dishes can be spicy. Their cuisine is enhanced with generous dollops of harissa, a household staple. Harissa is a heady combination of chilli peppers, garlic, caraway seeds, and salt are all ground into a thick paste. It is also almost always served as a condiment with Tunisian dishes. Presenting some of the most common Tunisian dishes. You must sample them to expand and humour your palate.

Couscous, one of the most famous Tunisian dishes

Couscous, the staple of Tunisian dishes

Couscous is one of the most authentic Tunisian foods. The word ‘couscous’ refers to both the complete dish and semolina pellets or tiny grains of durum wheat. Semolina flour is sprinkled with water until it forms into tiny pellets. These are then pushed through a sieve. Tunisian couscous is usually prepared on Fridays when whole families get together for the most important meal of the week. This Tunisian dish is traditionally made in a metal steamer pot called a couscoussier, where the stew is on the bottom. The small grains are placed in the perforated basket on top. These are cooked in the steam that rises from the rich stew. Originally a Berber dish, couscous consists of a stew-like sauce of vegetables like potatoes, tomatoes, courgettes, carrots, squash or pumpkin, and lamb or chicken that’s served on a bed of semolina. Fish is a common ingredient in couscous served in the island of Djerba and other coastal regions of Tunisia. Couscous is prepared in a multitude of ways around that North African region, but in Tunisia the stew always contains tomatoes and the semolina is mixed with a tomato-based sauce.

Slata Mechouia, one of the most popular Tunisian dishes

This salad is a Tunisian staple. It is served as a starter with almost every meal. Literally meaning ‘grilled salad’, Slata Mechouia is made up of tomatoes and green peppers that are charred over an open fire and then finely chopped and mixed with onions, garlic, ground coriander and caraway seeds, lemon juice, and plenty of olive oil. Harissa is also a dominant ingredient. Capers are also sometimes added for a bit of extra zing. The common toppings of one of the most popular Tunisian dishes are sliced hard-boiled eggs and tuna.

Houria salad is easy to make

Lablabi, the cheapest of the Tunisian dishes

Lablabi is cheap, fast to cook, satisfying, and widely available in low-cost restaurants. This is one of the most popular Tunisian dishes and caters to the working class of the country. The best lablabi is served at casual eateries (often called gargottes) across Tunisia. It is a thick soup or stew made of chickpeas and flavoured with cumin and garlic. Generation additions of harissa make lablabi spicy and it is served over small pieces of stale crusty bread. There is a certain way of eating lablabi. First of all, you will get an empty bowl (clay pot) and a piece of hard bread that is usually 2 days old. You need to break off the bread into small pieces with your hands and fill the bowl with them. The waiter then pours ladles of a soupy chickpea in your bowl. Lablabi is sometimes topped with sliced hard-boiled eggs and tuna. Another variety called hergma is made with cow’s hooves. You mix everything up using two spoons and your stew is ready to eat.

Chorba is a regional specialty and it is one of the Tunisian dishes that is eaten in winter. Also known as shorba, it is a soup or stew made with lots of barley, saffron, different vegetables, fish such as grouper or sea bass, and spices such as salt, pepper, and cayenne pepper. Chorba is also a Ramadan meal staple and in Tunisia, this soup is spiced with harissa and the base is stewed tomatoes.

Munnie and I eating Lablabi at a street restaurant in Tunis

Another regional specialty, this delicious egg and tomato dish is a popular breakfast dish. Although all across North Africa and the Middle East, in Tunisia, ojja is served either in a skillet or in a tajine. The base tomato sauce is flavoured with garlic, chili peppers, and spices, and the eggs are poached.

Brik a l’oeuf, one of the most popular Tunisian dishes

Brik is to Tunisia what samosa is in India. A staple snack that is relished across Tunisia, brik can be found in little shops throughout the country. It is made by filling a delicate pastry dough called malsouka with egg yolk, folded into a triangle, and then deep-fried. The filling has many options including potatoes, eggs, or tuna. The filling is flavoured with coriander and parsley. Briks are best served piping hot with a squeeze of fresh lemon juice.

Last but not the least, harissa is a thick, spicy paste made from hot chili peppers and garlic. Apart from being a condiment, harissa also serves as the foundation for numerous Tunisian dishes. Harissa’s spiciness depends on the number and type of chili peppers used in its making. In Tunisia, the peppers are typically smoked to add a complex, deep flavour, and harissa is often made in advance.

Harissa and Tunisian olives as condiments