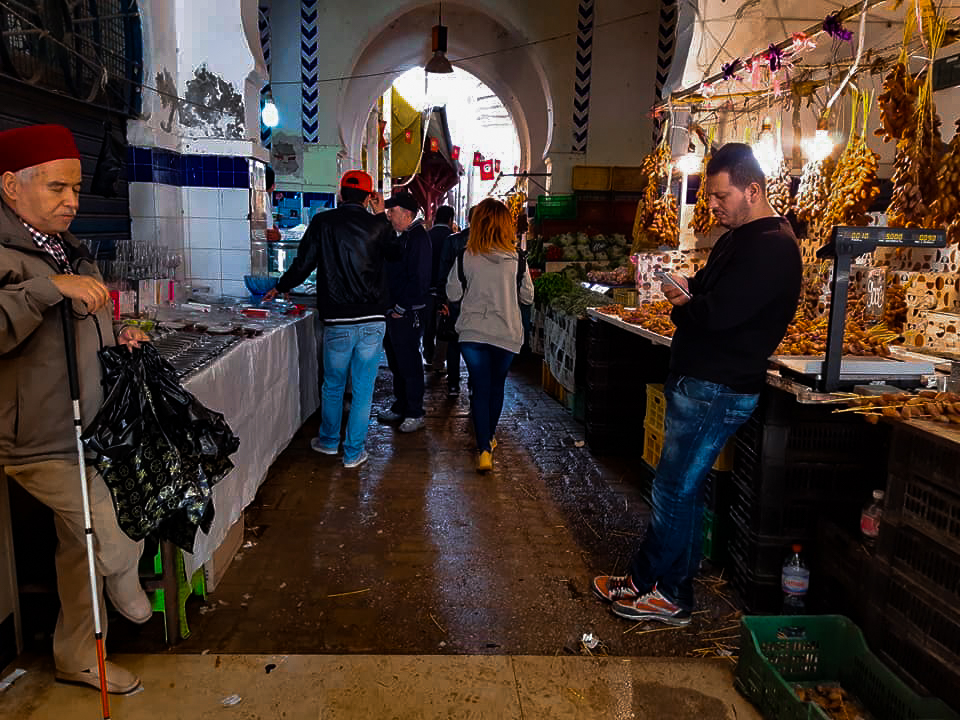 Visiting a local market is a great way to get a sense of a place and get a feel of its culture. I simply love them: the smells, the textures, the sounds, the jostling, and the bargaining. The Marché Central in Tunis provides all of that. Translated as the Central Market, it was built by the French. Yet it has a souq-like atmosphere to it. The original market building dates from 1891 and the halls behind were added later. Historically named Fondouk El Ghalla (the fruits caravanserai), it underwent recent extensive renovations. The Association de Sauvegarde de la Médina (the Association for the Preservation of the Medina) took an active part in the renovation of the central wooden market. The market has are three distinct areas: an enormous fish hall where you can watch locally caught fish being weighed, gutted, and scaled; a central hall where mounds of spicy harissa, tubs of plump olives, and blocks of pungent cheese are sold; and in the rear lies the fruit and vegetable section.

The fish market at Marché Central

I loved the Marché Central. I smelled it even before I reached there. Tunis is located by the sea and thus it is not surprising that the wet market is simply delightful. I am a Bengali and a big connoisseur of seafood. It is no wonder thus that its fish market was my favourite. Walking between the rows of fish stalls there was a lot of fun. It provided a barrage of sights, smells, and sounds, with sea creatures big and small piled up in glossy silvery heaps as traders sang praises of their wares. I saw slim sharks lying on ice, spiky snouts of swordfishes for sale, tangles of octopuses in boxes, and lots and lots of fresh mussels.

A cornucopia of colours and smells

The market sections were crowded with posh Tunis residents. Swarms of city-dwellers were browsing at the meats, fish, and fruits and vegetables. There were the mounds of beautifully arranged fruit and vegetables, almost begging to be sampled and squeezed. Piles of exotic pink beans, handmade ravioli, purple figs, and glossy green herbs. Just around the market are more food shops and stalls selling street food. My personal favourites were the lablabi shop and the man selling fresh Tunisian bread near the entrance. Although a bit grimy, the bread was warm and smelled delicious. More fresh produce is offered in the streets surrounding the Marché Central. Rue d’Espagne is famous for freshly roasted coffee beans and spices while the Rue du Danemark offers olives and pickles.

The Central Market is a large covered market, located in the middle of downtown. It is at 9 Rue de Allemagne, Tunis, Tunisia. The opening hours are daily 08:00 AM – 04:00 PM except for public holidays.