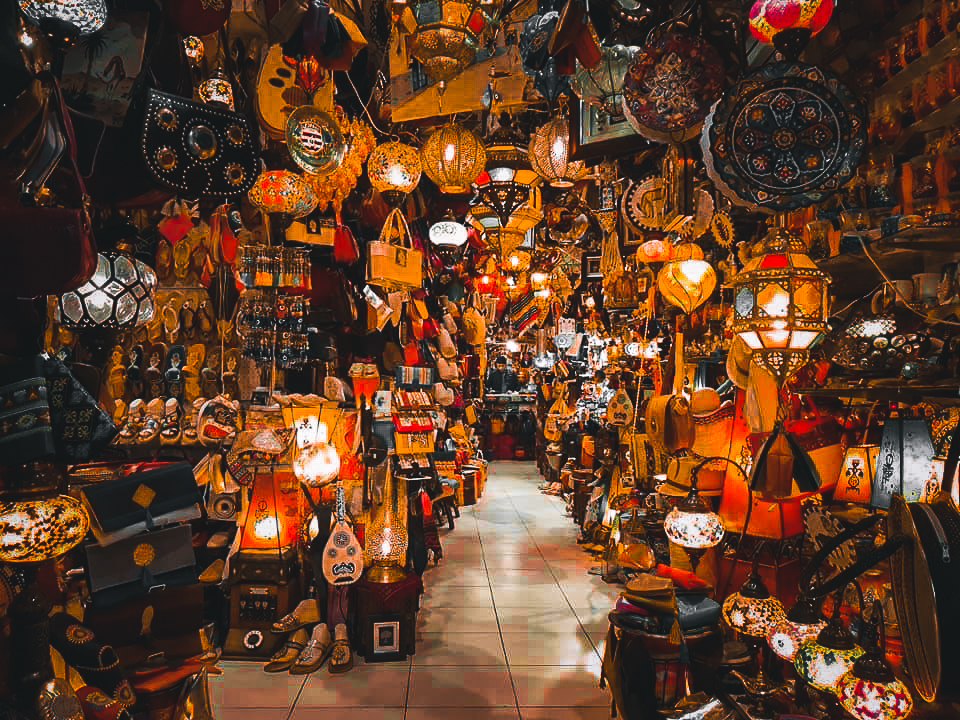 Tunis Medina is a fascinating place. Although it is supposed to be the easiest to navigate medinas in all of North Africa, I couldn’t figure out where one souk started and where the other ended. Technically an old city ‘within a city’, Tunis Medina hails from the 9th century. Originally it was surrounded by walls and 12 babs (gates), although nothing of the fortification except for 5 gates can be seen anymore. It was constructed in an oval form with a Kasbah, the seat of government, at its center. The old city was built around the religious center of the Grand Mosque Ezzaitouna. From the center, an array of lanes bifurcated into sections that held space for public meetings, official buildings, caravanserais, residential areas, souks, and artisans’ workshops. Most private residences were located around the souks and they opened onto narrow winding lanes.

A carpet seller at a souk in Tunis Medina

The maze of the Medina

Today, a lot of this medieval Medina remains the same and almost 2,000 people call it home. It is an incredible sprawling maze of ancient streets and alleyways. Numerous covered souks are located inside the Medina and they sell everything from shoes, clothes, chechia hats, carpets, to sheesha pipes. The labyrinthine back lanes are home to many artisans’ workshops and the residential sections are marked with grand brightly painted doorways. Tunis Medina is studded with historic palaces, mosques, hamams, and madrassas, many of which are beautifully decorated with tiles, carved columns, and wooden latticework. Tea shops punctuate the entire Medina with a steady regularity and here and there are some excellent garden restaurants serving the local food.

The beautiful lanes of the Medina

Architecturally and from the urban planning point of view, Tunis Medina is suitable for the local climate. The narrow streets stay cool in the scorching summers and in winter, they retain warmth. One of the most interesting parts of Tunis Medina is the existence of above-the-street-level vaults in many lanes. It is believed that since there was a shortage of space within the fortified walls of the Medina, the residents started constructing vertically. They built upwards, constructing vaults and rooms above the streets and these vaults were often high enough to fit a loaded caravan of camels. Tunis Medina indeed was a delightful rich old city.

A covered souk of the Medina

However, its glory waned in the 19th century, when the French developed the Ville Nouvelle (now Centre Ville) thus shifting the city’s seat of power. Most of the best and the richest families began to leave their ancestral homes, preferring suburban seaside mansions over the old city homes, and the importance of Medina declined. Over the years, modern housing slowly encroached over the Medina, and in the 1930s and 1940s, large parts of the northern section were demolished to clear the slums and improve vehicle access. Thankfully, several conservation groups rallied forth to protect the medina, and due to their joint effort, Tunisia retains its crown jewel. The Tunis Medina became a UNESCO World Heritage Site in 1979 and it has over 700 monuments dating back to the Almohad and the Hafsid periods of Tunisian history.

The notable buildings within the Tunis Medina

Tunis Medina in a nutshell

The beautiful souks of Tunis Medina