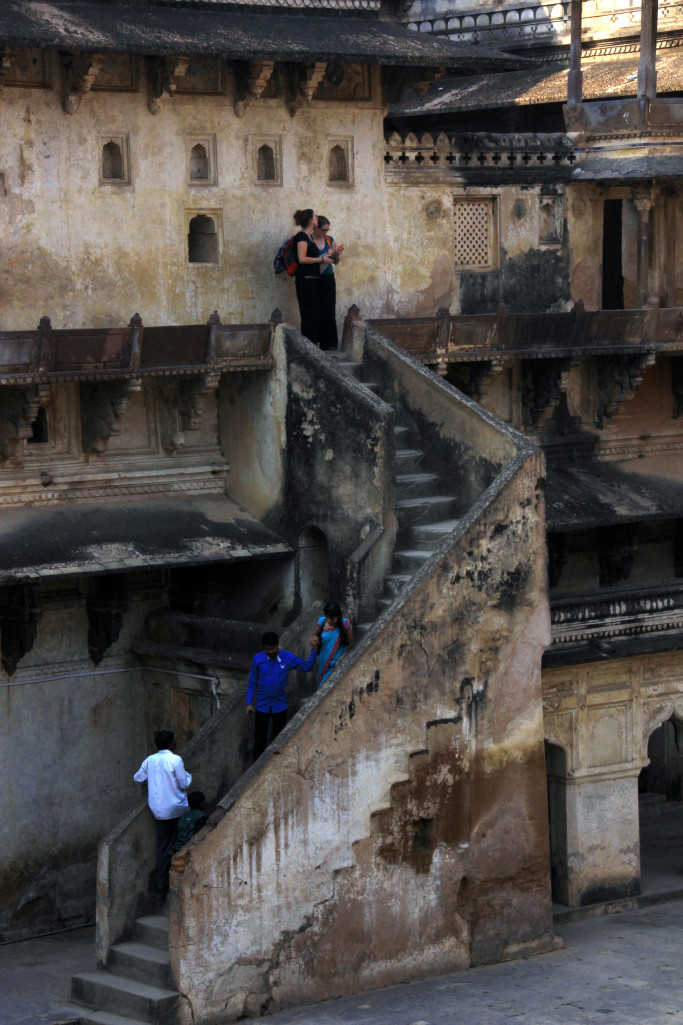 Placidly nestled on the bank of the lively Betwa river, Orcha seems to be straight out of a fairy tale. Erst while capital of the powerful Bundela Rajput kings,it is now just a fading memory of its romantic past. Magnificent temples, palaces and chhatris(cenotaphs) seep out forgotten tales of regal splendour, devotion and love. Very places have affected me,the way Orcha did. Its biggest charm lay in the fact that in spite of being surrounded with semi urban bustling life, the past still dominated the present in such a way,that nothing else mattered.

I had already been camping out in the quaint, dusty historical town of Jhansi, when Orcha happened. Jhansi is not exactly lovable from a traveler’s point of view (especially foreign tourists) but I fell for its photogenic quirkiness. Jhansi is famous for its valiant queen Laxmi Bai, grand fort, important railway junction and hopelessly jumbled tangle of myths and legends. She was one of the leading figures of the Indian Rebellion of 1857, who resisted the British Empire and even though the colonial rule lasted for more than 200 hundred years and claimed countless brave patriots, she still remains the most beloved freedom fighter of India.

According to General Hugh Rose, her rival British officer,”Rani Lakshmibai is personable, clever and beautiful” and she is “the most dangerous of all Indian leader. Expert in archery, horsemanship and self defense, the young widowed queen always went to the battle field with her army and her infant son tied to her back. She valiantly fought the East India Company till her last breath and even before succumbing to her wounds, not wishing the British to capture her body, she told a hermit to burn it. Jhansi still reflects her vigour and the city has way too many gun shops. In fact proud men in turbans brandishing their newly bought rifles, as they rode their motorcycles home is not an uncommon sight.

I was completely taken in by Jhansi’s crushing humanity, overwhelming “Indian” squalor and quaint serpentine lanes bearing knots of electrical wires and blazing remnants of a very painful history. Jhansi thrived, pulsated and refused to let go of her past fiercely, even though modernization smothered it by the second. The city was the most fitting tribute to its most beloved citizen, Quuen Laxmi Bai of Jhansi.

I moved on to Orcha one fine morning, having gotten lucky enough to share an auto rickshaw ride with a Japanese couple. Located in the state of Madhya Pradesh, Orchha  means ‘hidden’ in the local Bundelkhandi dialect. Established by Bundela chief Maharaja Rudra Pratap Singh in 1501, Orchha had the distinction of being the capital of one of the largest and most powerful princely states of Central India.

The 40 minutes ride from Jhansi (only 15 kilometers away) was uneventful except for a couple of regular hit and misses, few immobile cows,crazy bus drivers and neat piles of unprocessed garbage. Soon we turned off the highway and entered a wooded narrow paved road. The air became cleaner, smelled of sappy green and flotsam and jetsam of a powerful kingdom stood defiantly under a bright sun. A tiny village road appeared with bug eyed curious children, open sewers and rustic brightly coloured houses. A huge pinnacle towered in the background and suddenly the medieval city of Orcha, its palaces and temples still retaining their original grandeur, appeared like a phantom. Frozen in time, medieval Orcha loomed and overpowered everything, reducing the present into a mere mirage.

It was for the first time, that I experienced timeless in truest sense and it was nothing short of an emotional upheaval. The village was quite interesting in its own right. Based around the massive Ram Raja temple, it hummed pleasantly of a laid back life. The brightly painted houses, neatly swept lanes, lovingly decorated cows and colourfully dressed women were a photographer’s delight and sweet smiles and lilting Bundelkhandi language made it a very pleasant place. However everything seemed pointless in comparison to Orcha’s staggering glory and I took some time to get used to its magnificence.

While it was certainly no Taj Mahal, the beauty was raw, powerful and very sensual. I hid from the blazing noon sun and took a lazy break in my room till evening. My guest house was among one of the basic ones scattered around the village,and for 600 Rs (9 USD) it was cheap, safe and comfortable enough for a solo woman traveler. The in room lunch was delightfully simple and the free Wifi worked great. Sun mellowed soon, casting long grey shadows and I climbed up on the terrace to watch another day pass by the hauntingly beautiful city of Orcha, frozen forever in time.

It is a place

In the heart of India

In the powerful shadows of the past

A love story frozen in time