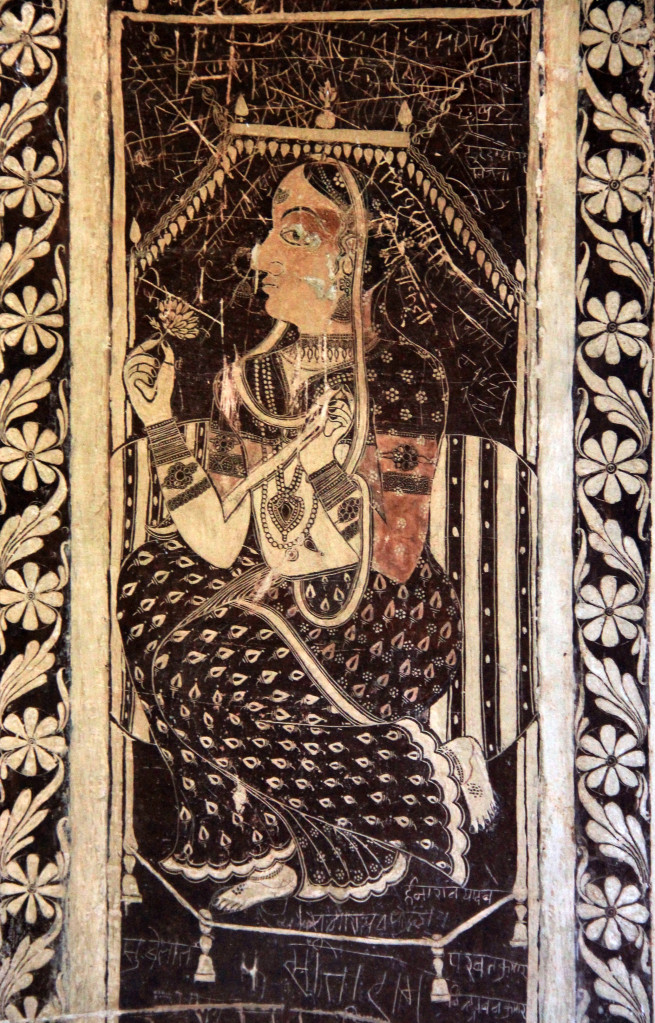 I woke up late the next morning and had my breakfast in bed. The huge Ram Raja temple was visible from my room and noises of rural domesticity enveloped me lovingly from all sides. Orcha is a pretty simple temple town, a far cry from the magnificent medieval kingdom it once used to be and apart from the larger than life ruins, nothing of its erstwhile glory remains. Presently it is small time India where cows decorated with bells and glittering ribbons are deemed sacred and ladies lovingly decorate their freshly swept courtyards with rice paste designs every morning.

It was early spring when my Orcha trip happened and that phase is one of the most pleasant seasons of India. The sun stayed deliciously soft till noon and mango trees were in full bloom. Tender nubs of jackfruit dotted the thick trunks and cuckoos went mad from happiness. In fact it was fun, to just laze in bed and hear them sing away riotously. I indulged in my childhood game of competing with them and it was great fun to behave innocently mindless again. Cuckoos dislike being imitated and always butt head with any one who does, by singing louder, longer till they get hoarse. Breakfast was a simple one of spiced potato bread/paratha as we call it, with dollops of home made fresh butter and big bowl of curd. I lazed till I got bed weary and finally got ready to venture out.

The beautiful Laxmi temple was a few steps uphill from where I stayed, so I decided to visit there first. An enchanting blend of fort and temple architectural style, this beautiful edifice is devoted to Goddess Laxmi, the goddess of wealth and good fortune. The architectural structure of Laxmi Temple was constructed by Vir Singh Deo in 1662, however over the years it deteriorated badly due to lack of maintenance till Prithvi Singh renovated the entire structure of the temple in the year of 1793. The temple still functions for religious purposes and draws devotees from far and wide.

The walls and ceilings of Laxmi Temple are a treasure house of beautiful paintings and colorful frescoes, of the unique Bundel and Mughal style of art and magnificent friezes and ornamentation fill its every nook and cranny. The colorful paintings on the walls and ceilings depict religious and secular subjects and flowers, mostly lotus(Godess Laxmi’s favourite) are richly carved all over. In spite of its magnificent grandeur the temple looked strangely neglected and lonesome, perched atop a hill like weary solitary survivor. A disinterested guard let me in and after being presented with a gift of 50 Rs (1 USD), enthusiastically showed me around.

The temple was stunningly beautiful, but not ostentatious in Taj Mahal sort of way. Rather its charm lay in understated magnificence, a strange perseverance of beauty in spite of being neglected, less maintained by ASI (Archaeological Survey of India) and badly vandalized. The frescoes were gouged out and scribbled on by senseless lovers, doodled on by bored locals and a lot of its beautiful colours seemed faded. Even then, the finesse and delicate brushstrokes of those artists, dead since centuries took my breath away.

I walked up to the highest turret and settled among the banyan tangles for an amazing view of the medieval kingdom. Orcha lay strewn all around like a forgotten page from the history book: little shrines and tombs, looming palaces and temples, each with its own poignant history, each contributing to its nostalgic beauty. Sun was high in the sky and countless parrots came back home, to fight with me for space. These birds mingled with the emerald greenery of the region and made these edifices their homes. Bright green and red, they were as much a part of Orcha’s beauty as its lovely wall paintings. An old hermit played a plaintive tune on a bamboo flute and apart from laughter of the brightly veiled labourer women, nobody was in the vicinity. Orcha for once seemed completely mine and I sat there embracing it for a long time. Hunger made its presence felt and I walked down towards the Betwa river for lunch.

Orcha has limited accommodation and dining options, and I had my first meal at the Grace of India restaurant (one of the countless roof top restaurants along the main road). However, run by a friendly local couple, this restaurant served great homemade, freshly cooked food, small clean rooms and peace. I tucked in a steaming plate of fluffy chapatis and peas and potato curry with curd and tried to adjust my thoughts about the Laxmi temple. Stunning and massive, its exquisite lotus domes and pinnacles, wall murals and blooming friezes, all bespoke of its grandeur, but somehow it saddened me like no other monument. Although restoration work was in full swing, its desolate loneliness screamed out in the most heart breaking away. It was a disturbing feeling and somehow it became clear that the rest of medieval Orcha would be sharing the same fate. I lingered on at the restaurant with my mango lassi, before finally moving on towards the jewel of the powerful Bundela kingdom of Orcha – the spectacular Jahangir Mahal.

But it was its old glory

Was a poignant mix of

Thanks to the guard

For a very nostalgic

Insight into the important

Of its past magnificence

With a heavy heart

I left my lotus bower

For a brighter new Orcha