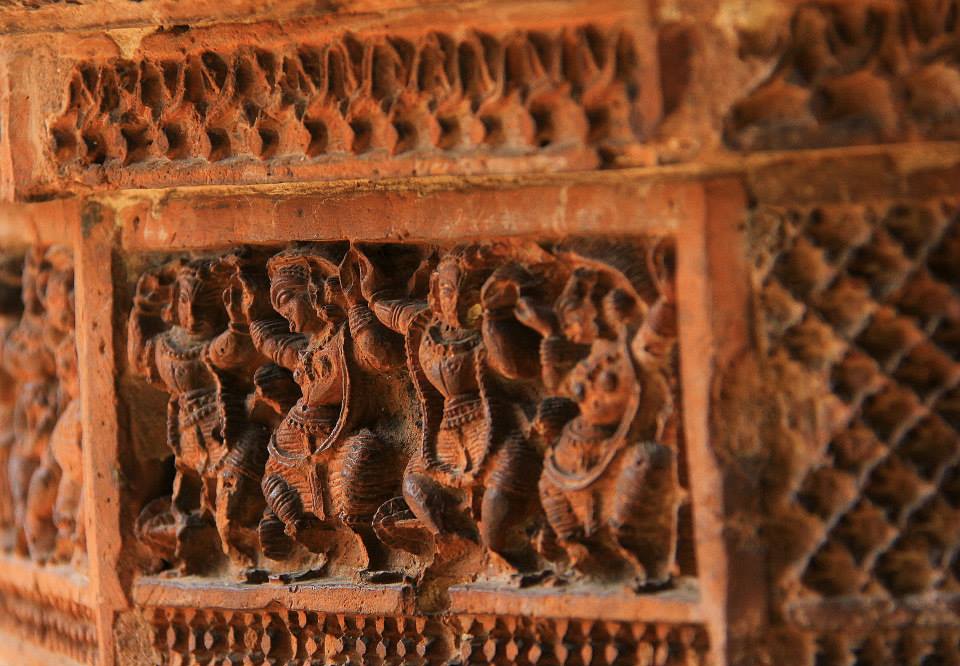 It had been a spring morning when a friend and I had boarded a local train for Ambika Kalna. An ancient port town, Ambika Kalna or Kalna (as it is popularly known) is located on the western bank of Bhagirathi River in the culturally rich Bardhaman district of West Bengal. It had flourished on riverine trade and had been used as an important naval base by the 7th century ruler Shashanka. Many ancient manuscripts and chronicles, including the 13th century collection of Bengal Hindu deities narratives called Mangal Kavya had sung its praises and many indigenous trading items had been credited to the port town. From a very unique quality of sugar (called Japot), soft cotton paper, intricate bell metal work and jute, Ambika Kalna had bustled with commerce. It had also been actively involved in indigo cultivation and the British had loved Puratan Hat for its blue gold.

Kalna’s prosperity and importance had diminished with dying out of its jute, indigo and other local industries and today, it is just another small town of West Bengal. However, history has left very prominent marks on its culturescape and under the patronage of powerful 18th century Maharajas of Bardhaman, the town had been blessed with many gorgeous temples with intricate terracotta detailing. Although Bengal’s most exquisite terracotta temples have been credited to Bishnupur, I had been told that the ones at Ambika Kalna are at par with them. I had never seen a terracotta temple before and had no idea of what to expect, when Kalna station has arrived without any pomp and show. It had indeed been just another small town train station, half deserted and sunny, with stray dogs sleeping in the shade. My friend had been a skilled bargainer and after a bit of cringe worthy duel of prices, we had hired a cycle rickshaw for a small town tour. Incidentally Kalna had been celebrating Saraswati Puja (a local religious festival) that day and I had received the 1st cultural shock of my own state.

In Calcutta, though we do celebrate the glory of pretty swan white Saraswati, it is more of a juvenile festival since she is a goddess of arts and education. The festival also marks the beginning of spring when flowers, various fruits and pretty girls in colourful saris blossom across the state. Hence it is also called Basanti Puja or the Spring Festival. In Kalna, the 1st sight which had met our eyes, had been preposterously big twisted horns of trumpets and they had been borne by skinny men in sparkling fancy clothes of a marching band. The trumpets had blown in high octave unison with cymbals, drums and other musical instruments and I had nearly fallen off my rickshaw at the sight of the bizarre procession. Bengalis are by nature more sublime than the rest of their national counterparts and their marriages do not feature the usual dance, drama and processions of North India’s Big Fat Indian Weddings. Hence the procession had looked totally out of place in the tranquil green pocket of Bengal’s town when suddenly another marching band had appeared in sight.

The new band too had been equally glorious and soon the winding lanes had been filled with dazzling men, braying music and outlandish installation arts. The statues had come in form of aeroplanes, larger than life birds, flowers, women and famous figures and lovely ladies in traditional saris had made a bee line for them. Kalna had been celebrating Saraswati Puja, the way Calcutta indulges in annual Durga Puja and the port town had been drowning with noise, bustle and colourful merry laughter. It had been very photogenic as we had twisted in and out of that dazzling stream through narrow crumbling lanes and suddenly terracotta temples had been totally forgotten. The terracotta legacy however had arrived fast and we had quickly found our way inside Kalna’s Siddheshwari Temple. Dedicated to the town’s patron goddess Ambika Siddheshwari, it had been established in the year 1740 by the then Maharaja of Bardhaman and the char chala (4 domed) structure is famous for its single neem log idol of Bamakali. Flecked with hints of tantra and deep religious symbols, the temple, which is considered to be the most auspicious, has a gruesome history of human sacrifice too. The practice however had winnowed out with time and today its incense enveloped altar uses alternatives like goats, pumpkins etc.

Despite its glory and history, Siddheshwari Temple had been disappointing. The building’s much hyped terracotta panels had been thickly painted with garish colours thus obscuring its historical value and the 3 Shiva temples inside the complex had been poorly maintained. It had been a huge disappointment and I had felt very sad by Bengal’s deteriorating archaeological treasures. The next temple of Ananta Basudev had been equally ill maintained and hardly any of its terracotta panels could be seen any more. Gopalbari Temple however, had been a pleasant break and its still intact terracotta panels had been beautiful. They had covered the entire length of the spired temple and erotica, hunting, trading, flowers, wars and dancers had been etched on them. The baked earth had glowed warm red in the peaking sun and tiny cobwebs had left silvery shadows on their rough surface. It had been a well preserved temple and I had wondered hopefully for the rest of Kalna’s treasures to be in the same condition.

The sun had been high as our rickshaw had slowly creaked past dazzling rows of pretty saris and the young driver had swerved and swayed at the sight of dangerous laughing curves. Small town Bengal had taken over in full swing and berries of various shapes had been sold in mounds. Fondly called “kul” or “ber”, berries are uniquely spring fruit and come in different shapes, sizes and fancy names. From egg shaped narkel kul, crunchy apple kul to rose scented golap (rose) kul, they are as much a part of Bengal’s Basanta (spring) as yellow blossoms. Flowers too had filled every inch of Kalna and I had stared blankly at political graffiti etched walls, sunlit remnants of latticed windows and pots of holy basil, when the cycle rickshaw had come to a rolling stop in front of the royal Rajbari Complex. Burdened by previous disappointments and a bit unsure, I had entered the sprawling complex filled with doubts. But what had followed, had been unexpected and I had been taken aback at my 1st skeptical royal step.

Ambika Kalna had been

Discovering it had been easy

And from the safety of a cycle rickshaw

I had taken in its

With its historical importance

Had been religious at best

And its destroying terracotta art

Had been a pleasant surprise

And its intricate detailing

Had been terracotta art

It had also restored my hopes back

And  had made me look forward