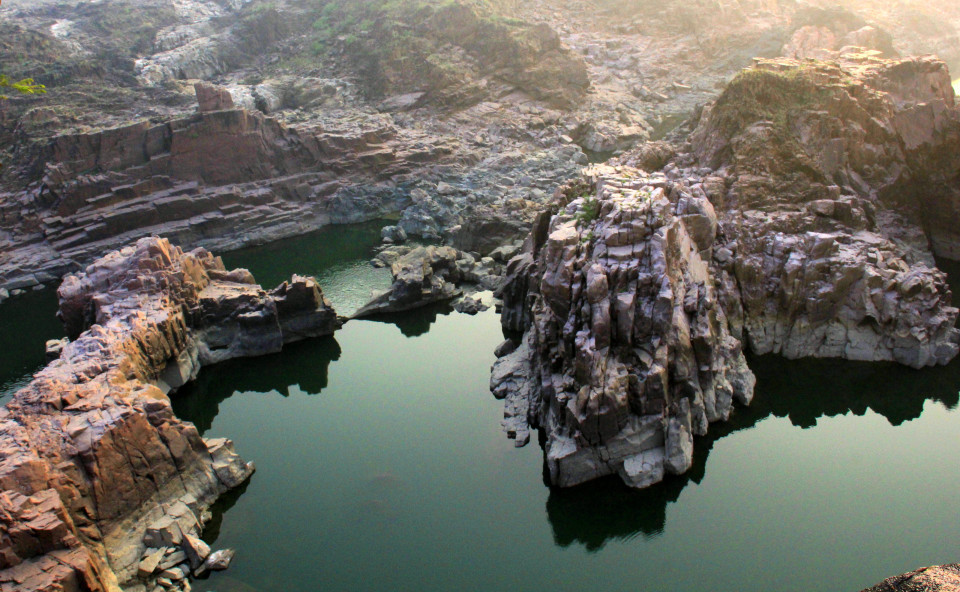 The passionate chase of the stag shook us up badly that we took a long breather by the Ken River. We were in the mild wilderness of the Ken Gharial Sanctuary and urban India seemed like another planet. Among one of the few sanctuaries in India that is sincerely dedicated to breeding programs and proper housing of Gharials, a cousin of the mighty crocodiles, it is a very deceptively calm place. Located at the meeting point of the twin rivers, namely, Ken and Khudar, it is approximately 24 kilometers away from Khajuraho. So while often visited by nature and animal enthusiasts, it blissfully misses out the tourist craze of the temple town.

Gharial, a slimmer cousin of the mighty crocodile is the chief attraction of the Ken Gharial Sanctuary and the rippled water of Ken are teeming with them. A rare breed of reptiles, they lurk dangerously underneath the deep blue water, stretch slack jawed immobile on the huge white rocks and prey on fishes or living creatures available within their reach. Although no report of a gharial attack on human has been ever reported at Ken, a few years ago a cow was killed by one of them somewhere close to where we were sitting.

While the Gharials do not have the massive skull and jaw power of the crocodiles, they are extremely fast and the ones found at Ken, have been recorded to have grown to an astounding length of 6 meters. Known as the ‘Indian Gharials’ their characteristic exceedingly elongated and unbelievably slender snouts sets them apart from their evolutionary contemporaries, the crocodiles. They lazed all around us and as we sipped our evening tea, they slithered all over the gorgeous volcanic rocks. The rocks at Ken fascinated me. Granite, Jasper, Dolomite and Quartz they painted the serene landscape in wild splashes of colours. Greys, Greens, Purples and Bronze, they caught the fading sunlight and dazzled like a million jewels. It was unreal and a very rich feeling, like sitting on a jewel box with sun bouncing metallic rainbow rays off them.

We made our way back slowly leaving the Gharials behind, to catch a bright sunset by the Ken Falls. It was turning out to be a mild evening and clear skies held the promise of a beautiful sunset. Incidentally ever since my travel luck as a rain maker was confirmed, I have always caught some of the most beautiful sunsets at home, in different parts of India.While Jaipur has some of the most vivid ones, Calcutta brightens up in rich purple and gold nearly every spring evening. We walked slowly with blue buck and langurs giving us company. The black faced langurs and blue bucks are best of friends and usually always found in each other’s company.

The langurs, who stay perched up on high branches always alert their buddies by emitting harsh distress sounds. While they are reportedly non violent/pesky towards humans, their bitter enemies the red faced monkeys often get killed in their skirmishes. Evening sounds filled the forest, shrieking monkeys, cries of the unseen and a million happy twitters of the home coming birds. They all cried in unison, calling upon each other, greeting, joking- a huge web of socializing happy birds, networking after a hard day’s work. Peacocks danced, wild boars rustled and golden deer watched shyly with beautiful doe eyes. Gentle, helpless they are often poached because of their beautiful skin and musk, embedded in their navel. A highly valued ingredients, musk is one of the most expensive animal product and used in perfume industry as base notes. Usually found in male deer, the word musk originates from the Sanskrit word for “testicle”, musk and every year, their population keeps dwindling for trying to keep up with human vanity. Sure enough we passed by the remains of a deer piled under a ghost tree and I could only hope that it was not due to human intervention.

A cool violet and red sunset spread over the volcanic gorge of Ken River and slim black Tendua branches turned a shade darker. Dark green Tendua leaves are dried and rolled to make bidis, the famous Indian cigars. It is extremely popular with the non urban population of India and most village afternoons men and grandmothers can be seen squatted under tangly banyan trees smoking up in glory. A soft twilight fell and Ken gorge sparkled silver. Ken river dominated the area and bifurcated through the green, gold and purple gorge into many branches before plunging down and collecting at various places, creating tiny jewel pools. Matchstick and Wispy ghost trees faded into the darkness as I rushed back towards Mandla. It had been an amazing day followed by a stunning evening in the heart of Hindusthan, India..

It is stunning in monsoons

Due to at least 40 waterfall formations

But on that day it just tiptoed calmly

A Gharial from too close quarters

Sun set in the golden forest

And busy residents of Ken

It was the perfect break before rushing headlong into

The crowd of Khajuraho